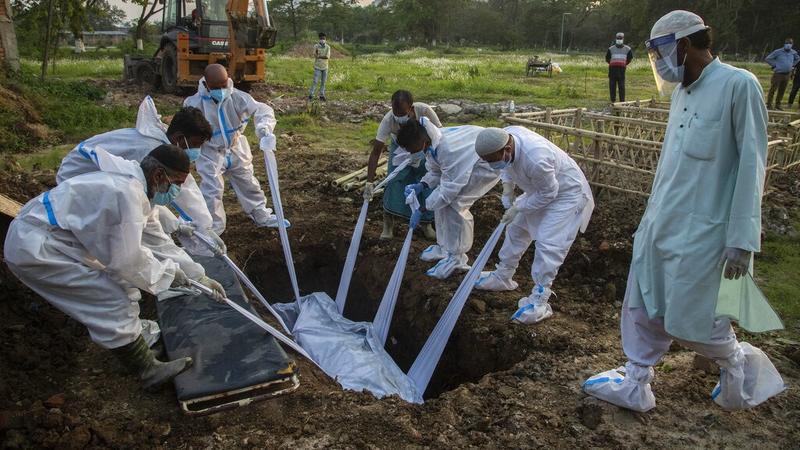 Relatives and municipal workers in protective suit bury the body of a person who died due to COVID-19 in Gauhati, India, April 25, 2021. (ANUPAM NATH / AP)

The world's biggest producer of COVID-19 vaccines has a limited number of shots available, worsening a grim second wave of infections that has overwhelmed hospitals and morgues while families scramble for scarce medicines and oxygen.

Some experts blame mass religious gatherings and political rallies for the severity of India's second wave, which caught the government unprepared.

A forum of scientific advisers set up by Modi administration warned Indian officials in early March of a new and more contagious variant of the coronavirus taking hold in the country, five scientists who are part of the forum told Reuters.

Despite the warning, four of the scientists said the federal government did not seek to impose major restrictions to contain the spread of the virus. Millions, largely unmasked, attended religious gatherings and election rallies that were held by Modi, leaders of the ruling Bharatiya Janata Party and opposition politicians.

The previous high was 1,260 infections announced on Wednesday, NHK said.

The capital Tokyo has also seen a surge in infections, with 1,050 new cases on Saturday, according to NHK.

Meanwhile, Japan’s government will approve the use of Moderna Inc’s COVID-19 vaccine as soon as May 21, the Yomiuri newspaper reported Saturday without attribution.

The Moderna vaccine would be the second to get approved in Japan and will be used in the nation’s large inoculation centers that will open in Tokyo and Osaka from May 24, the paper said. Currently, only the Pfizer Inc. vaccine is cleared for use in Japan.

Japan has a contract with Moderna for enough shots to inoculate 25 million people, and is set to receive sufficient deliveries for 20 million by June and another 5 million in the following three months, the paper said.

The European Union said on Monday that it had authorized some 52.3 million doses made in European factories by companies including Pfizer and Moderna for export to Japan, the highest volume among all 43 countries to which vaccines have been shipped.

Thailand on Saturday reported a new daily record of 21 coronavirus deaths in one day, the health ministry said, as the Southeast Asian country prepared to open registration for a long-awaited mass vaccination campaign.

The health ministry reported 1,891 new cases, bringing the total number of infections to 67,044 since the pandemic began last year, with 224 deaths.

Thailand is fighting a fierce third wave of infections, the worst of the pandemic after a year of relative success in controlling the virus.

The new outbreak includes the highly transmissible B.1.1.7 variant and has accounted for about half of its total cases and deaths during the pandemic.

Also on Saturday, the Thai government started implementing the latest restrictions to control its biggest virus outbreak since the pandemic began. New rules include increasing mandatory quarantine for all arrivals to two weeks, prohibiting dine-in at restaurants in high-risk areas including the capital, banning large gatherings and mandatory nationwide mask wearing in public areas.

From May 2, crew with recent travel history to, including transiting in, those countries within the last 14 days preceding arrival to Singapore are barred from the port of Singapore, according to a circular from the Maritime and Port Authority of Singapore.

This is in line with measures announced Friday by the Ministry of Health barring long-term pass holders and short-term visitors from entry or transit into Singapore.

Meanwhile, Singapore will reinstate some social distancing controls and tighten borders with countries that are seeing a persistent rise in coronavirus cases to stem a virus spread in the city.

The government will allow fewer people at malls and large stores, and close campsites for two weeks from May 1, according to a statement from the health ministry on Friday. It will reduce the operating capacity of attractions to 50 percent from 65 percent for a week from May 7, and urged people to limit social gatherings to two per day and stay home where possible, it said.

"The Turkish Medicines and Medical Devices Agency approved the emergency use of Sputnik V vaccine after examinations and evaluations," Koca said on his Twitter account.

Sputnik V became the third vaccine to be used in Turkey, after China's Sinovac and the Pfizer-BioNTech jointly developed by the German company BioNTech and the US firm Pfizer.

On Wednesday, Koca stated that Turkey signed a procurement deal with Russia for 50 million doses of Sputnik V vaccine within six months, noting the first shipment of the vaccines would be delivered in May.

Turkey has so far administered over 22.8 million COVID-19 jabs across the country. More than 13.7 million people have received their first doses, and over 9.1 million have taken their second shots.

Also on Friday, the country reported 31,891 new COVID-19 cases, including 2,673 symptomatic patients, raising the total number in the country to 4,820,591, according to the health ministry.

By Friday, 858,296 people have received the first dose of coronavirus vaccines in Iran and 209,827 people the second dose. 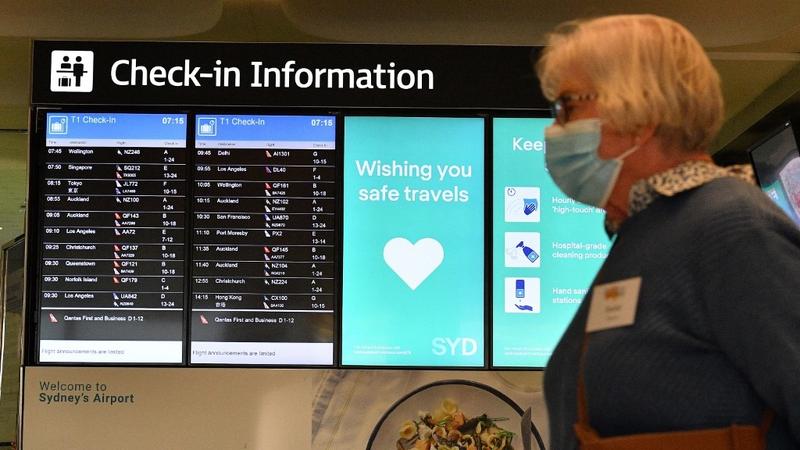 A woman proceeds to the check-in counter at Sydney International Airport on April 19, 2021. (SAEED KHAN / AFP)

Australia has temporarily banned its citizens from returning from India.

The pause on allowing in travelers that were in India within 14 days of arriving will take effect from Monday, Health Minister Greg Hunt said in an emailed statement. Breaches of the ban could lead to a fine of A$66,600 (US$51,000), five years imprisonment, or both.

As virus cases surge in countries such as India, there are fears Australia’s quarantine system will buckle with more returning travelers testing positive. While the nation has come close to eliminating local transmission of the virus by closing its international border to non-residents - other than a new travel bubble with New thZealand - occasional cases leak into the community from quarantine hotels.

“The risk assessment that informed the decision was based on the proportion of overseas travelers in quarantine in Australia who have acquired a COVID-19 infection in India,” Hunt said.

Australia on Tuesday banned all flights from India until at least May 15, but it was still possible to fly in through a third country. The new measure seeks to close that loophole and will be reviewed on May 15.

The nation’s cabinet will focus on repatriating vulnerable Australians from India, with dedicated flights starting as soon as possible after May 15, Hunt said Friday in a press conference.

"In view of prevailing global and regional disease trends, Pakistan has decided to reduce inbound international travel from 5 May to 20th May," said the National Command Operation Center (NCOC), which oversees the government's pandemic response, on Twitter.

It was not immediately clear which routes and air carriers would be affected.

Pakistan has seen record deaths in recent days from the coronavirus, and stricter restrictions on movement and gathering in public are planned for the upcoming Eid holiday.

On Saturday authorities reported 4,696 new confirmed COVID-19 cases in the past 24 hours and 146 deaths from the disease.

The Israeli government on Friday decided to ban travel of Israeli citizens to seven countries over high COVID-19 morbidity and fear of the spread of variants of the virus, according to a joint statement issued by Prime Minister's Office and Health Ministry.

The ban will take effect on Monday, and will last at least 13 days, the statement said.

The decision follows a ministry's warning against travel to the seven destinations, reflecting both the current situation and the morbidity levels according to several criteria such as the countries' declarations, the percentage of vaccination and recovery, and evidence of variants.

Iraqi health officials on Friday warned of the new double mutant variant of the coronavirus identified in India as it could reach Iraq.

"The strain of the coronavirus (identified) in India has higher transmissibility and its danger is greater than the strain in Britain, and it affects young people and children," Ruba Falah, head of the ministry's media office, said in a press release.

"The health authorities have not recorded any infection with the strain in Iraq so far, but everything is possible due to non-compliance with health prevention measures and the reluctance of citizens to take the vaccine, as well as travelling to the affected countries," Falah added.

Meanwhile, the Ministry of Health reported 6,405 new coronavirus cases during the past 24 hours in Iraq, raising the total nationwide number to 1,065,199.

A statement by the ministry also reported 32 new deaths, raising the death toll from the infectious virus to 15,465, while the total recoveries in Iraq climbed by 7,111 to 942,046.

The Indian government on Friday permitted the import of oxygen concentrators for personal use.

The oxygen concentrators have been included in the list of exempted categories, where customs clearance is sought as gifts.

"Import of goods, including those purchased from e-commerce portals, through post or courier, where customs clearance is sought as gifts, is prohibited except for life saving drugs / medicines/ oxygen concentrators and rakhi," read a notification of the Directorate General of Foreign Trade (DGFT).

"The exemption for oxygen concentrators is allowed only for a period till July 31, 2021."

The second wave of the pandemic has caused a shortage of oxygen and essential medicines in the country's hospitals.

The federal health ministry said on Friday morning that 386,452 new cases and 3,498 related deaths were registered in the past 24 hours across the country.

Meanwhile, 1,593 more recovered from the virus, bringing the overall recoveries to 189,544, while the fatalities increased by eight to 458, according to a ministry statement quoted by QNA.

The disease has so far claimed 124 lives in Mongolia after six more deaths were reported over the past 24 hours, the center said.

Over 845,600 people have been vaccinated against the virus in Mongolia so far.

South Korea reported 627 more cases of COVID-19 as of midnight Friday compared to 24 hours ago, raising the total number of infections to 122,634.

The daily caseload was down from 661 in the previous day, staying below 700 for three days.

Cambodia's death toll from COVID-19 has risen to 96 on Saturday after three new fatalities were confirmed in the last 24 hours, the Ministry of Health (MoH) said in a statement.

The latest deceased patients were two women, aged 76 and 67, and one man aged 61, the statement said, adding that they all succumbed to the disease at the Khmer-Soviet Friendship Hospital in capital Phnom Penh.

According to Brunei's Ministry of Health, both cases do not have any symptoms.

There have been three deaths reported from COVID-19 so far in Brunei.

Currently, there are 52 active cases in Fiji, with 19 border quarantine cases, 31 locally transmitted cases and two cases with unknown sources. 65 cases in Fiji have fully recovered and two have died since the nation's first case in March last year.

To further stop the spread of the virus, Fiji announced last Sunday the 14-day containment zones in the Lami-Suva-Nausori area.

The country has also maintained a nationwide curfew from 11:00 p.m. to 4:00 a.m. local time since March last year.

The Philippines' Department of Health (DOH) reported on Saturday 9,226 new COVID-19 infections, bringing the total number of confirmed cases in the Southeast Asian country to 1,046,653.

The death toll climbed to 17,354 after 120 more patients died from the viral disease, the DOH said.

Metro Manila and its four adjacent provinces entered another two-week lockdown on Saturday to decongest the hospitals and curb the transmission of the virus.

Meanwhile, the country received its first batch of Sputnik V coronavirus vaccines from Russia on Saturday, local media reported. The shots add to the nation’s vaccine stockpiles that also include those developed by AstraZeneca and Sinovac.