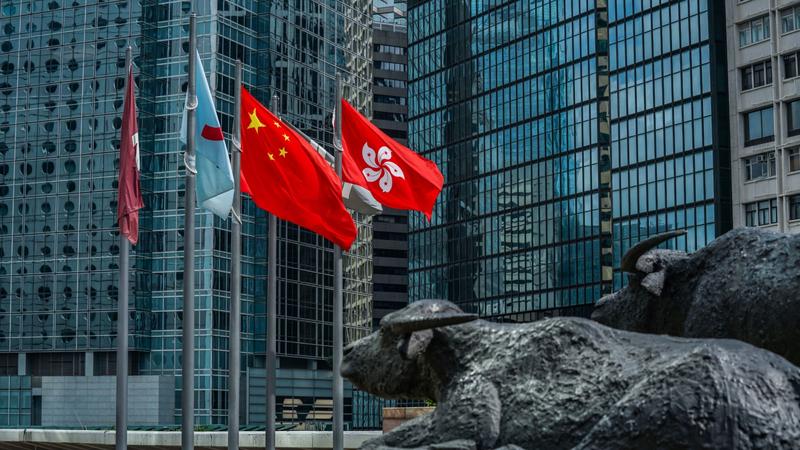 The Chinese national flag (2nd right) flies alongside the flag of the Hong Kong Special Administrative Region (right) outside the Exchange Square complex, which houses the Hong Kong Stock Exchange, in Hong Kong, China, on May 29, 2020. (PHOTO/BLOOMBERG)

By the end of March, 146 new economy companies had listed in Hong Kong since then, raising a total of 682.2 billion Hong Kong dollars (about US$88 billion), and accounting for 61 percent of the total IPO fund-raising, Hong Kong Exchanges and Clearing Limited (HKEX) said Thursday.

"We are very pleased to see that the introduction of the new listing regime has helped to transform our markets," Calvin Tai, HKEX interim chief executive, said. "HKEX has become the go-to international capital market for new economy companies, and is already the world's second-biggest biotech fund-raising hub."

In 2020, newly-listed new economy companies contributed 21 percent of the turnover in the cash equities market, up from just 1 percent in 2018.

With the fresh momentum offered by the new economy, Tai said HKEX will continue to enhance the competitiveness of its markets and maintain their quality, resilience and attractiveness as a leading global financial center.