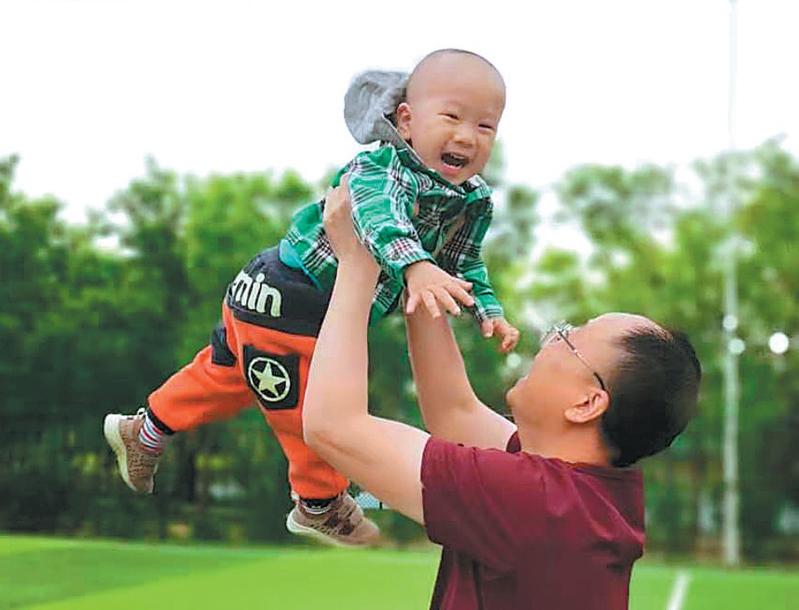 Wu lifts his son up to express his joy after the boy made progress at playing soccer. (PHOTO PROVIDED TO CHINA DAILY)

There was no yelling or arguing, but Chen Huangliang could sense his father's disappointment and anger via the momentary pause on the other end of the phone.

The 36-year-old had just admitted that he had quit his well-paid job in the power-generation industry and been a stay-at-home dad for more than a year.

Like many older people in China, Chen's father believes that a man should have a job and make good money to support his family, rather than spending his days with children.

Chen, who lives with his family in Shanghai, has a 7-year-old son and a 1-year-old daughter. He quit work in 2018 because wanted to be more involved with his son's upbringing. However, he didn't tell his parents or in-laws for a year, until his father enquired about his work and family.

"I wasn't surprised by my father's views on stay-at-home dads. He paused for a few seconds before asking me why I had not asked my mother-in-law to take care of the children. I didn't expect him to understand right away," Chen said.

His wife, a writer and columnist, has a good income, so she supports the family. She was fully in favor of Chen's choice, meaning he had few financial concerns.

"My wife and I don't think looking after children should be a casual thing. It should be treated more seriously than a job," he said.

In addition to handling daily domestic affairs, Chen runs a subscription account on WeChat in which he shares details of his life with the children.

The account brings him a little extra money, while his wife pays him 20,000 yuan (US$3,000) a month to look after the children. 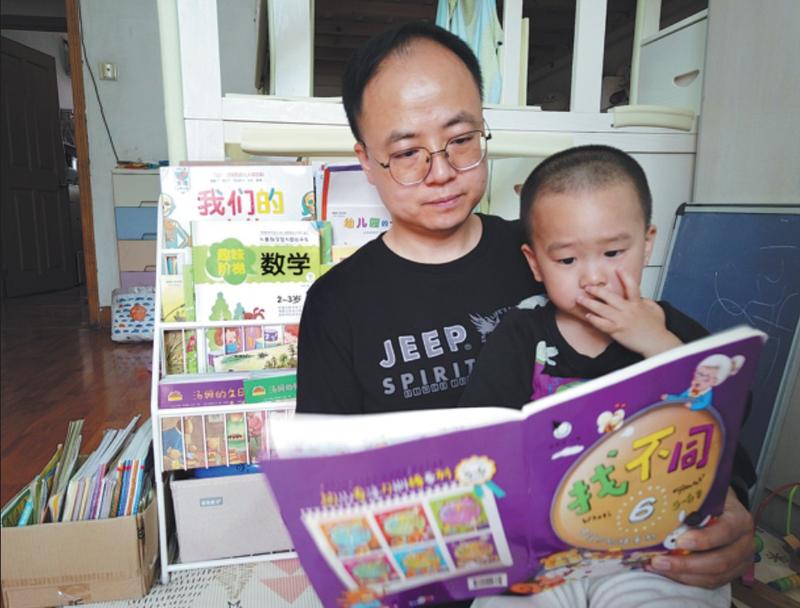 The proud father teaches his son English and math for an hour every morning. (PHOTO PROVIDED TO CHINA DAILY)

Wu Xinhai, a stay-at-home dad in Beijing, said: "Grandparents cannot replace the role of parents when looking after children. Moreover, the core education for children such as good manners, self-discipline and a sense of independence must be taught by the parents during childhood."

Grandparents cannot replace the role of parents when looking after children

When Wu was a child, his parents worked in factories and didn't have much time to coach him or listen to his problems, but that was normal among children of his generation, he recalled.

"I was quite independent of my family after I started school. I was not willing to share my thoughts and life with my parents, and I did not care about their opinions or criticism. I want my kids to have a different childhood from mine," he said.

After Wu's daughter was born in 2007, his in-laws looked after her for about two years. However, as they came from Shandong province, they had no friends in the capital and lacked social interaction. That lack of outside contact led to Wu's daughter gradually becoming so introverted that she was too scared to speak to strangers or play with her peers.

In 2010, when Wu came up with the idea of quitting his job as a programmer with the computer manufacturer Lenovo, his wife and other relatives were firmly opposed to the plan.

Despite the opposition, Wu and his daughter attended a six-month parenting course where he mastered all the requisite skills.

In addition to looking after the girl, he promised to help the family by earning 5,000 yuan every month through freelance work via his second-string job as a nutritional consultant. Eventually, his constant requests and persistence won his family over and they reluctantly agreed to his proposal.

In Wu's view, parents only have about 10 years to build good relationships with their children. That's because many youngsters enter a rebellious phase at about the time they start junior high school and don't want to share their lives and feelings with their parents.

"We must look at the long term, not just immediate interests. People were born to experience life, so being with our children is something we really must do. People can make money anytime, but the absence of engagement in a child's early years can never be reversed," he said.

Taking care of a child requires a range of abilities to help resolve various issues. Chen's first step was to move out of his in-laws' house and live solely with his wife and children so he could teach his son to be independent.

"Older people often like to do things for kids, such as putting on their clothes and shoes, which gives the child no chance to practice," Chen said.

However, he feels that he may have not done sufficient preparation for his new role because his son once told him that he wanted to start a "dad school" to train men how to be good parents and keep their children happy.

In terms of taking care of the children, Chen has found that he attracts more praise from people around him than his wife, even if he is only waiting in the playground or at the school gate with other children's relatives, usually mothers or grandparents.

While mothers are likely to face criticism if their child gets a cough or is poorly dressed, people often ignore these things if a father happens to be looking after the child, he said.

Wu's son was born in 2018, and he has enjoyed the experience of feeding the boy every two hours, hugging and kissing him and changing his diapers. Whenever he takes his son outdoors, he carries a bag of baby products.

"Sometimes family issues and a crying baby can really make a new mom or dad lose their temper or despair as it seems like these things will never end," he said.

"I once thought parenting was easy, but life gave me a lesson. I hope every couple and their families will treasure and respect those who are willing to quit their jobs and focus on their children."

With his mother's assistance and his wife's support, Wu has implemented a personal timetable.

Although he is busy from 5:30 am to 10:30 pm every day, he still finds time to enjoy hobbies, exercise and run his consultancy, in addition to handling family and babysitting issues.

As such, he said he is reveling in the joy brought by his current life.