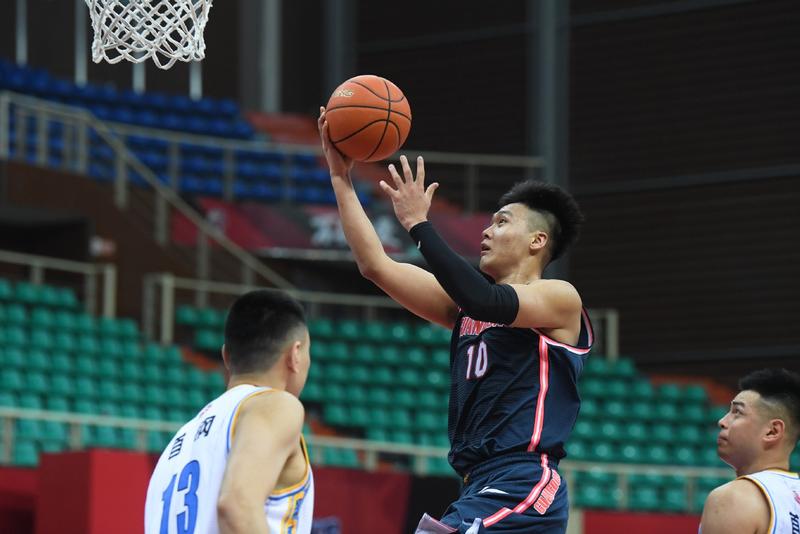 As their previous playoff head-to-head record (14-1) showed, reigning champion Guangdong essentially used one quarter to make sure of their victory, ending the first quarter 19 points ahead.

Guangdong head coach Du Feng thought his side had an almost perfect first half, doing a great job and showing concentration on the floor.

"With a big advantage in the second half, we failed to keep the same level defensively and handle the ball as planned offensively," he admitted.

Lester Hudson scored 16 of his 27 points in the fourth quarter, when Shandong outscored Guangdong 32-22, but it was too late considering their big deficit after the first three quarters.

Guangdong South Tigers' head coach Du Feng thought his side had an almost perfect first half, doing a great job and showing concentration on the floor

Gao Shiyan showed his versatility by finishing with 24 points, eight rebounds and nine assists for Shandong. Tao Hanlin recorded a double-double of 23 points and 11 boards.

Tao scored Shandong's first nine points, but thanks to different players' scoring output, Guangdong rode on an early 8-0 spurt to take the lead for good.

Zhao had 13 points in the first quarter, while Shandong's leading scorer Hudson was held scoreless in front of his opponents' defensive rotation. After Troy Gillenwater's unsportsmanlike foul, Guangdong guard Xu Jie converted both free throws, and Zhou followed with a jumper to cap an 11-0 scoring run en route to a 35-16 advantage at the conclusion of the first quarter.

Hu and Ren spearheaded Guangdong's attack in the second quarter. Another 12-0 surge earned the regular season's top-ranked side their biggest advantage of 38 points, before Tao and Wang Ruheng helped Shandong come back a bit and set the halftime score at 70-40.

The third period was time and again interrupted by fouls. After a pair of three-pointers from Hudson, Zhou held firm to score six straight points and Guangdong raced ahead 95-67 heading into the final quarter.

Hudson continued his rebound in shooting touch afterwards, hitting four 3s on his way to tallying half of Shandong's total points in the fourth quarter, but his side came no closer than 18 points.

Shandong head coach Gong Xiaobin said his side had expected difficulties before the game, but was still not accustomed to Guangdong's tough defense at the start, turning the ball over many times and giving opponents fast break chances.

"We are in the final four, and all other sides are strong. Guangdong is the reigning champion, and we should take the matchup as a learning process," he commented.

The second game between the two sides will be held on Thursday.

Wednesday sees the start of the other semifinal between the Liaoning Flying Leopards and the Zhejiang Golden Bulls.