By ​Shi Jing in Shanghai 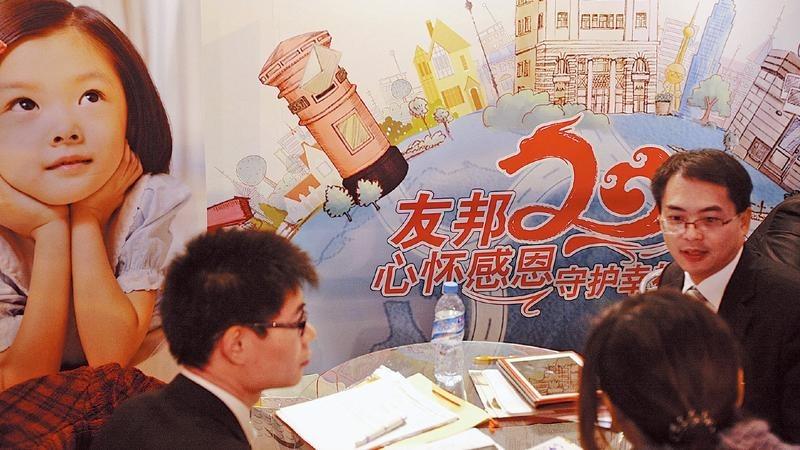 China's continuous efforts in financial opening-up have not only enhanced market vibrancy but also benefited many big international names. Insurance giant AIA is one of them.

In November, AIA Life Insurance applied to set up a branch in Sichuan province after it was incorporated as the first wholly foreign-owned life insurance company last year.

In November, AIA Life Insurance applied to set up a branch in Sichuan province after it was incorporated as the first wholly foreign-owned life insurance company last year

On March 22, the China Banking and Insurance Regulatory Commission gave AIA approval and its Sichuan operations became AIA Life Insurance's first provincial branch in the Chinese mainland. It was only three days after the CBIRC announced the latest amendments to the regulations of foreign-funded insurance companies in China.

AIA chose to set up the branch in Chengdu, Sichuan province, as the provincial capital is an economic and cultural center of Southwestern China and home to a large population of mid to highend consumers, said Zhang Xiaoyu, CEO of AIA Life Insurance.

The Ministry of Public Security showed that Chengdu had more than 5.45 million private cars as of end-2020, second only to Beijing. During the first half of last year, luxury consumption in Chengdu surged 55 percent over its historic mean, while consumption contracted in Beijing, Shanghai and Shenzhen, Guangdong province, according to real estate firm Savills.

AIA's major step forward in Sichuan is closely related to the ongoing opening-up in the Chinese insurance industry. The State Council, the country's Cabinet, announced in July 2019 the decision to remove the limit on foreign ownership in life insurance joint ventures. Foreign ownership is thus increased to 100 percent from 51 percent previously.

CBIRC Chairman Guo Shuqing said during a news conference on March 2 that China has seen more than 100 foreign insurers become registered since 2018. Deepened market and institutional reforms will be conducted this year to stimulate market vitality, he said.

The favorable policy environment in China has boosted AIA's business. For the first time, the Chinese mainland became the largest VONB (Value of New Business) contributor to AIA Group last year, achieving US$968 million. Zhang said this is in part related to the Chinese mainland's quick recovery from the COVID-19 pandemic.

In the first place, companies in general have sped up their digitalization process amid the pandemic. But at the same time, face-to-face communication is still indispensable despite growing popularity of convenience-empowered digital solutions, which insurance companies should not overlook, Zhang said.

He added that another major take-away is that Chinese people's awareness of their health has also been significantly strengthened after the pandemic largely came under control domestically. People need total solutions rather than one single product. Therefore, in early February, AIA launched a new critical illness insurance product that allows consumers to customize policies and services based on individual needs.

While foreign and domestic insurers are now treated equally, the former still only constitutes a relatively small portion of the Chinese insurance market at present. Publicly available data shows that foreign life insurers took up 10.03 percent of China's market share at the end of last year, up from 8.1 percent in 2018.

The relatively small market share of foreign insurers does not concern AIA too much. Instead of overemphasizing premiums, AIA attaches more importance to the value of new business and stable operations, Zhang said.

More importantly, the size of the Chinese market is enormous. While China's social security and medical insurance covers a great number of people, the level of protection provided is limited. In other words, commercial insurance is vital to cater to the increasingly sophisticated Chinese consumer, he added.

Commercial insurance will also play an increasingly large role in terms of eldercare. In the 14th Five-Year Plan (2021-25) passed by the National People's Congress in early March, the central government included a recommendation to raise the retirement age to 68. This also points to more opportunities for insurance companies as pressure on pension funds will mount, resulting in increasing need for commercial life insurance, Zhang said.

AIA is not put off by the possible intensified competition to come in the wake of further opening-up.

"Actually most of the international leading players all have a presence in China. There will be no big changes regarding the competition scenario. It is not a zero-sum game for insurance companies operating in China. We have not studied the needs enough here, such as the sub-healthy group, but there is still plenty of room for insurers to explore here," he said.

According to WTO agreements, AIA has been doing business in Beijing, Shanghai, Guangdong, Shenzhen, Jiangsu, Tianjin and Shijiazhuang for quite some time.

Relaxed regulatory grip on the sector will not be translated into a rapid expansion pace for AIA in the country, said Zhang. Instead, the company will reach into new markets with steady speed.

"We will pursue opportunities in areas with high GDP, large number of middle-class customers and high potential talent. But we will not just rush in. We have our pace and principles－to ensure high-quality growth and to bring protection and long-term wealth management to local consumers," he added.

As an "AIA baby" who joined the company in 2000, rotating in all key functions, Zhang understands that strategic persistence is key to a company's sustainability and success. The company should firmly stick to the rule of specializing in something and never rushing blindly into certain areas.

"But such persistence should not be an excuse to be stagnant. By keeping on the right trajectory, we still emphasize innovation at AIA.Therefore, it is our hope that AIA can grow into an influential and highly trusted insurance company in China in the next decade and over the many years to come," Zhang said.