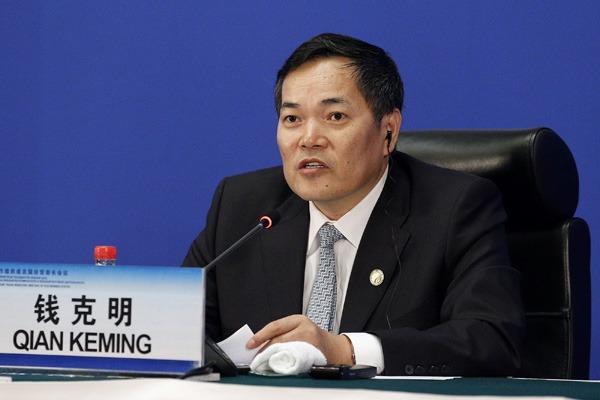 In this Sept 16, 2015 photo, Chinese Vice-Minister of Commerce Qian Keming answers a question at the press conference of the 14th SCO Trade and Economic Ministers’ Meeting in Xi'an. (PHOTO / COMMERCE MINISTRY OF THE PRC)

Generally, the green development concept will be integrated into the whole process of outbound investment cooperation

In the first quarter of this year, China's trade with countries and regions along the Belt and Road rose by 21.4 percent year on year to reach 2.5 trillion yuan (about US$384 billion), he said at a sub-forum of the Boao Forum for Asia annual conference.

For the next step, China will promote green and low-carbon energy in countries along the Belt and Road, developing efficient, clean and renewable energies. These energies include gas, solar, wind power, hydropower and nuclear power. China will also carry out energy projects with better environmental benefits, Qian said.

Companies should adopt high standards in the planning, design and construction of infrastructure projects overseas, he said.

They would be directed to use environment-friendly technology, equipment, material and processes to minimize the adverse impact of infrastructure construction projects on the environment.

Generally, the green development concept will be integrated into the whole process of outbound investment cooperation, he said.

China will also take action to promote the debt sustainability of developing countries, he said.

China has suspended debt repayment of the poorest countries and provided assistance to other developing countries as much as it can, he said.