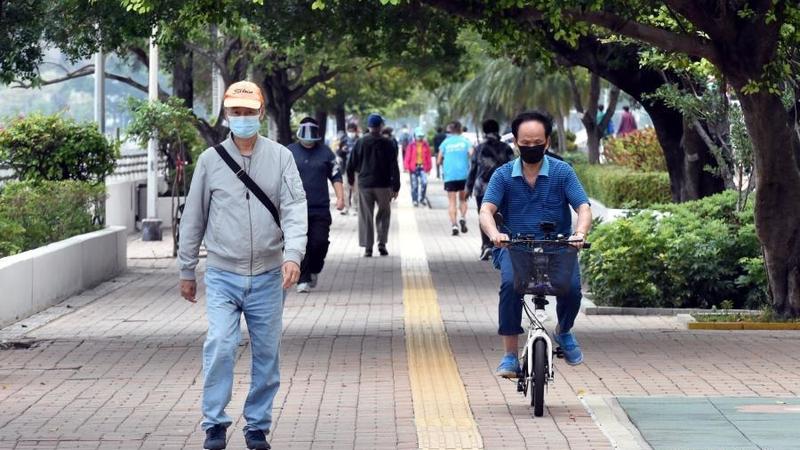 This photo shows people walking as a man rides a bike on a pathway in Hong Kong on March 3, 2021. (LO PING FAI / XINHUA)

HONG KONG – The Hong Kong government cordoned off two buildings in Tsuen Wan on Monday night for targeted testing as the city reported 12 new COVID-19 cases, all but one of which were imported.

Government personnel put up temporary specimen collection stations and reminded residents to remain in their premises and undergo compulsory testing.

The government said it expected to finish its operation in Fu Yung Building by 7 am Tuesday while the one in Belvedere Garden would be wrapped up by 7:30 am.

The 11 imported cases on Monday included seven from India, three from the Philippines and one from the United States, the Centre for Health Protection said in a statement.

The 11 imported cases included seven from India, three from the Philippines and one from the United States, the Centre for Health Protection said in a statement

ALSO READ: HK to ban flights from Pakistan, India, the Philippines till May 3

The Hong Kong government had announced that flights from India, the Philippines and Pakistan, would be banned for two weeks starting Tuesday after several travelers from these countries tested positive for the N501Y mutant COVID-19 strain in the last 14 days. The city’s total of confirmed cases stood at 11,695.

Hong Kong also recorded on Sunday 29 imported cases, of which 22 were from India.

The sole locally infected patient on Monday was an 84-year-old man who lived in a flat on the eighth floor at Yau Oi Estate Oi Fai House in Tuen Mun, according to the CHP. He was the 10th resident of the building found with the coronavirus.

There was a previously confirmed patient living next door to the old man, who was asymptomatic. The CHP said all the residents on the floor where they lived would be evacuated.

The CHP also said that the Harbour City shopping center in Tsim Sha Tsui was visited by a patient with the contagious COVID-19 variant. People who went there on April 11 were required to get tested no later than Tuesday.

Health authorities have identified two local patients with the mutated strain: a 29-year-old man arriving from Dubai and a 31-year-old woman who lived in Parkes Building in Jordan, where the man from Dubai had stayed after his mandatory hotel quarantine, the CHP said.

The woman was a staff member of Optimal Family Health, a clinic at The Centrium in Central, which was put under a mandatory testing order, requiring all visitors from March 29 to Sunday to get tested. Clinic staff members and patients would be sent to quarantine centers, the CHP added.

Meanwhile, the government said in a statement that about 1,123,500 doses of COVID-19 vaccines have been administered to members of the public as of Monday.

About 741,300 persons have received their first dose, with about 380,500 persons receiving the Sinovac vaccine and about 360,800 persons getting the BioNTech vaccine.