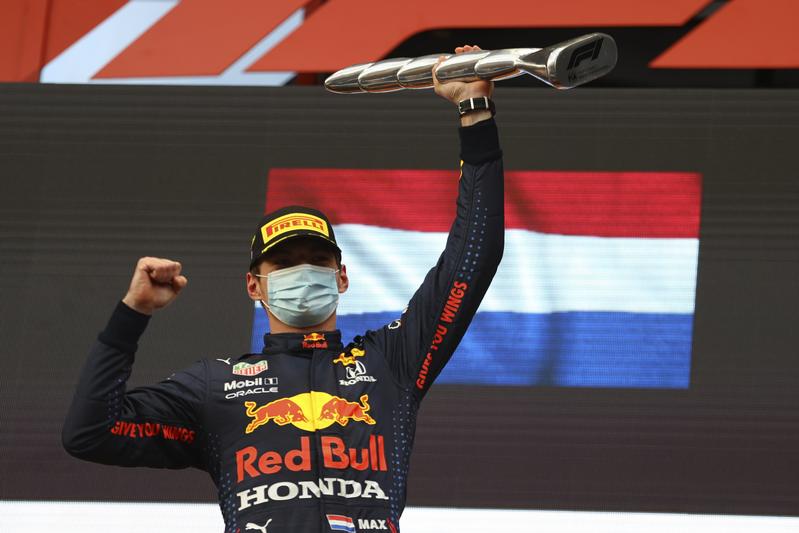 First placed Red Bull's Max Verstappen celebrates on the podium at the end of the Emilia Romagna Formula One Grand Prix, at the Imola racetrack, Italy on April 18, 2021. (BRYN LENNON / POOL VIA AP)

A rain shower just before the race caught many teams out, with Fernando Alonso and Charles Leclerc notably sliding wide on their way to the grid as the drivers struggled for grip.

It was very challenging out there, especially in the beginning ... It was very hard to stay on track. With tyres degrading in the wet, to choose the right moment to go to slicks is never easy. I had a little moment with my restart but everything else went well today.

Starting third on the grid, Verstappen made the best start on a damp track to pass both teammate Sergio Perez and Hamilton to take the lead after the Tamburello chicane.

After an early safety car period to clear debris from Nicholas Latifi's crashed Williams, Verstappen maintained his lead and set about building a four-second advantage over Hamilton in second.

As the track began to dry, drivers came in for slick tyres and emerged in much the same order, before Hamilton made an uncharacteristic error and slid wide at the Tosa hairpin, damaging his front wing and causing him to drop to ninth, one lap behind leader Verstappen.

However, almost as soon as Hamilton had slid off, his teammate Bottas tangled at high-speed with the Williams of Russell, with the resulting crash leaving debris strewn across the circuit and forcing the race to be temporarily halted while marshals cleared the wreckage.

The subsequent restart bunched the pack up and allowed Hamilton to charge from eighth to second place and take the bonus point for fastest lap, though he was powerless to do anything about the flying Verstappen, who recovered from a half-spin before the restart to take a comfortable win by 22 seconds.

"It was very challenging out there, especially in the beginning," said Verstappen afterwards. "It was very hard to stay on track. With tyres degrading in the wet, to choose the right moment to go to slicks is never easy. I had a little moment with my restart but everything else went well today."

Hamilton acknowledged his rare mistake afterwards, and seemed relieved to have salvaged second place. "One my side, it wasn't the greatest of days. First time I've made a mistake in a long time, but I'm grateful I could bring the car home."

"There was only one dry line and I guess I was in too much of a hurry to get by everyone. I could see it was wet but [the car] just wouldn't stop and sent me off. But fortunately we got going again and got some points for the team."

Behind the top two, a fine drive saw McLaren's Lando Norris take the final podium place on a weekend where the Briton had looked quick throughout.

The two Ferraris of Charles Leclerc and Carlos Sainz took fourth and fifth places respectively in the Scuderia's most competitive race for some time, with Norris' teammate Daniel Ricciardo in sixth.

Lance Stroll finished seventh in his Aston Martin despite suffering with overheating brakes on his way to the grid, ahead of AlphaTauri's Pierre Gasly, who salvaged eighth place after a gamble to start on full wet tyres backfired.

Kimi Raikkonen finished a solid ninth for Alfa Romeo's first points of the season, with Alpine's Esteban Ocon rounding out the top ten.

Verstappen's teammate Perez finished a lowly 12th after sliding off while sitting fourth and enduring a scrappy end to his race.

Following the race, Hamilton still leads the drivers' championship with 44 points, but Verstappen is just one point behind in what looks set to be a season-long championship battle between the two. Norris ranks third with 27 points.

In the constructors' standings, Mercedes leads the way with 60 points, ahead of Red Bull on 53, and McLaren with 41.

The next race of the 2021 F1 season is the Portuguese Grand Prix at Portimao on May 2.