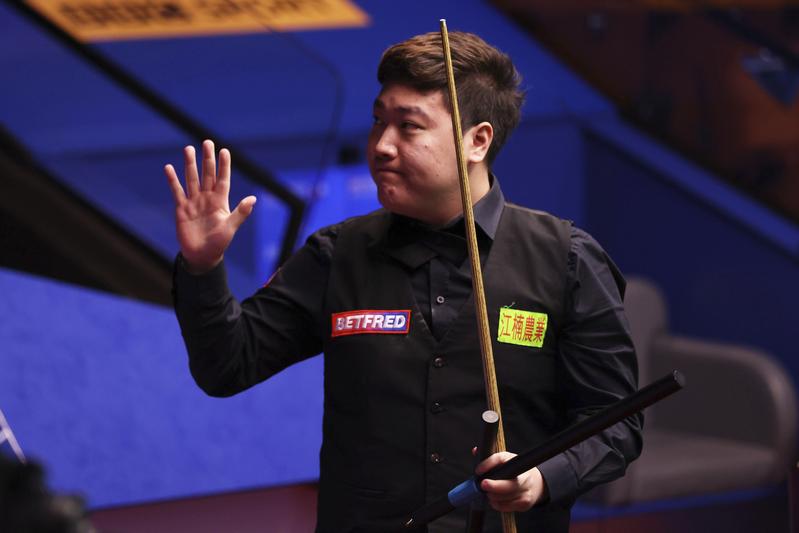 China's Yan Bingtao celebrates winning a match against England's Martin Gould on day 1 of the World Snooker Championships 2021 at The Crucible, Sheffield, England on April 18, 2021. (GEORGE WOOD / PA VIA AP)

Yan, 21, started his opening-round campaign in Sheffield as the 10th seed and drew 4-4 with qualifier Gould on Saturday.

The Chinese hopeful then played an upper hand in the second session, seeing off world number 27 Gould 10-6 with the highest break of 130 in the match.

"Winning the Masters changed my life. I am working hard on practicing for this Championship," said Yan, who beat veteran John Higgins to claim the Masters title in January, becoming the youngest Masters champion since Ronnie O'Sullivan won the event in 1995 at the age of 19.

Masters champion Yan Bingtao of China hopeful then played an upper hand in the second session, seeing off world number 27 Martin Gould 10-6 with the highest break of 130 in the match

Yan's compatriot Liang Wenbo could not match an in-form Neil Robertson, as the world number three from Australia eased to a 10-3 victory.

"I'm quite excited that the more we can go on in the tournament, the more crowds can be allowed in as well. I thought the crowd was really good, even though they were reduced," Robertson told the World Snooker Tour website.

The event running from April 17 to May 3 is part of the UK's Event Research Programme which means audience participation in this event is possible.