Yan wins glory at the Masters 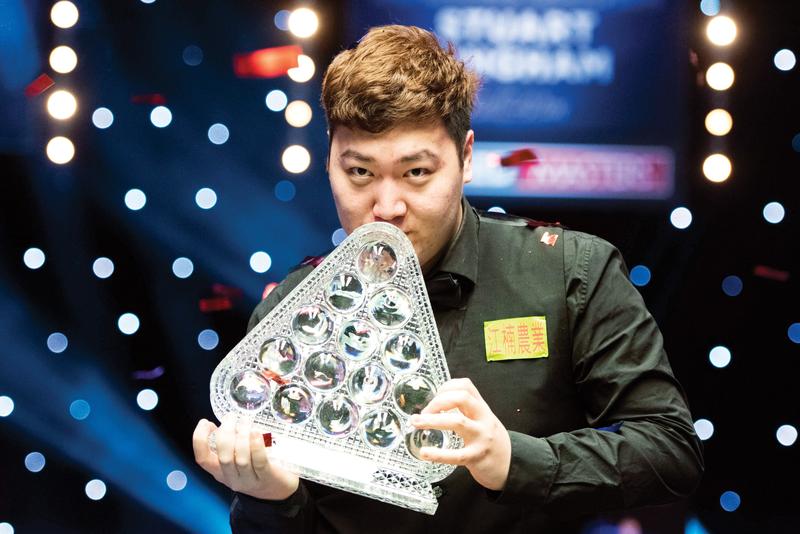 On Jan 17, the steely nerved 20-year-old became just the second Asian winner of the prestigious tournament, showing maturity beyond his years to defeat four-time world champion John Higgins 10-8 in an enthralling final in Milton Keynes, England.

The victory earned Yan a check for £250,000 (US$340,500), and in many observers’ estimations has transformed the Chinese No 2, who was making his Masters debut, into a contender for April’s world championship.

More than his prolific potting or solid safety play, it was Yan’s coolness under pressure that convinced the experts that he is destined for greatness — although the man himself admitted he was a bundle of nerves as he closed on victory.

“I felt very tired in the closing moments tonight,” said Yan, a native of Zibo, Shandong province. “My heart was beating hard on that last red, I was so close to the winning line and he kept fighting. That was the moment that I felt the most pressure.

“I just told myself to keep working and not give up. I controlled the cue ball. I just slowly finished the last three or four balls after potting the red.

“My mom and dad were watching on TV. They probably didn’t sleep tonight. They have always told me to never give up and to enjoy my life.”

With Chinese fans watching the action live on TV into the early hours, and news of the victory viewed over 3.5 million times on Weibo by Jan 18, Yan was quick to acknowledge all the support back home.

“Thanks all of you who waited in front of the screen and cheered for me. The championship for me is a milestone. I will keep fighting,” Yan, whose run to Masters glory took place behind closed doors due to the COVID-19 pandemic, posted on Weibo.

As well as managing the growing weight of expectations on his shoulders, Yan’s win will also require some physical strength on his part when it comes to placing the hefty Paul Hunter Trophy into his presentation cabinet.

“I finally took a close look at the trophy. It’s too beautiful … And I just weighed it. It’s about 30 kilograms … Well, that’s the weight to match my favorite trophy,” he added.

Yan turned pro in 2015, becoming the first player born in the year 2000 to join the circuit. In 2019, he captured his first ranking title at the Riga Masters in Latvia, becoming the first teenager to win a ranking event since compatriot Ding Junhui in 2006.

From day one of his Masters journey, Yan had to dig deep. All of his matches leading up to the final — against Neil Robertson, Stephen Maguire and 2020 champion Stuart Bingham — went the distance on 6-5 scorelines. On Jan 17, he also faced an uphill struggle, trailing Higgins 3-5 and 5-7 before clawing his way back.

The victory makes Yan the youngest Masters champion since Ronnie O’Sullivan claimed the title in 1995 at the age of 19. Yan is also the youngest finalist since Ding lost the 2007 edition.

Now expectations are soaring for Yan to surpass the 33-year-old Ding, who won the last of his four Triple Crown titles at the 2011 Masters and who has so far failed in his bid to become the first Chinese to win the world championship.

Many of the game’s greats, including runner-up Higgins, are tipping Yan to end that wait.

“I have played him the last few years, he has not much to learn in the tactical department and he is scoring as well now,” Higgins told the BBC.

“He is about the same age as my boy. He could be a world champion without a shadow of a doubt, so China is very lucky to have him.”

John Parrott, the 1991 world champion, echoed those sentiments, telling the BBC: “You need talent but his temperament is bulletproof. To be that age and to be so calm and composed when playing for one of our biggest trophies is magnificent.”

Six-time world champion O’Sullivan is sure the world has just witnessed the emergence of a new snooker legend.

“It’s like when (Stephen) Hendry came along, them type of players, John Higgins, Mark Williams, you thought, ‘this could go on for a while,’” O’Sullivan told Eurosport.

And “The Rocket” reckons Yan has a better chance of being crowned world champion at the Crucible, where the championship is staged, than Ding.

“I think he’s got more chance of doing it because he’s got a lot more time on his side,” O’Sullivan said.

“I think it’s a good time to be coming into snooker. It’s hard to say because there might be another three or four (new talents) come out the woodwork in one or two years and we might be saying the same about them. But at the moment he (Yan) is the most mature. We’ve seen him do it under extreme pressure and you need to be able to perform under pressure to win the Crucible,” he added.

“I just think he’s going to get stronger and stronger and it will bring other players through as well. I’d be very surprised if he doesn’t win at least one or two world titles.”