FedEx shooting: Gunman 'had been detained for mental illness' 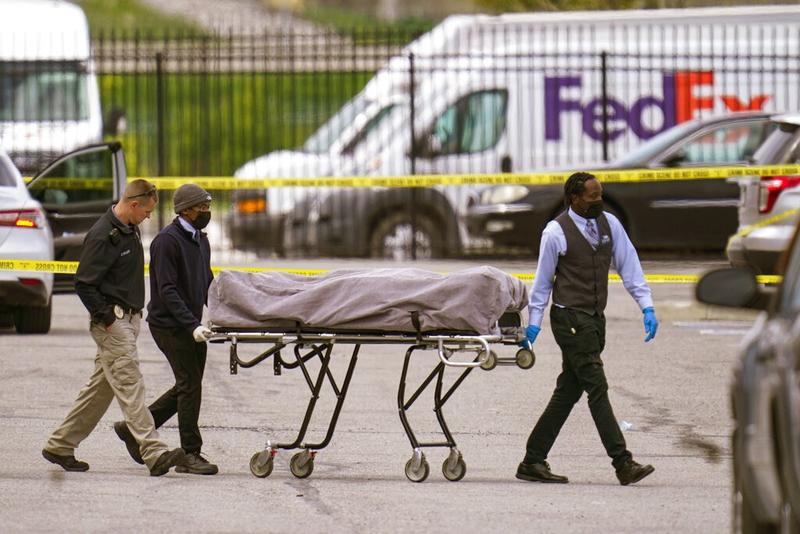 A body is taken from the scene where multiple people were shot at a FedEx Ground facility in Indianapolis, April 16, 2021. (MICHAEL CONROY/AP)

The 19-year-old gunman who killed eight workers and himself at an Indianapolis FedEx center was a former employee who was placed under psychiatric detention last year after his mother reported concerns he might commit "suicide by cop," police and FBI said.

Four members of the Sikh religious community - three women and a man - were among the dead in Thursday night's gun rampage, according to a local Sikh leader who said he had been briefed by the victims' families.

Law enforcement officials said they had not immediately determined whether racial or ethnic hatred was behind the killings. But a Sikh civil rights advocacy group called for an investigation of any possible hate bias involved in the crime.

President Joe Biden, who called US gun deaths a "national embarrassment", insisted he could stem gun violence while also pushing a sweeping jobs package and working to rein in the coronavirus pandemic

The incident - the latest in a spate of at least seven deadly mass shootings in the United States over the past month - unfolded at a FedEx operations center near Indianapolis International Airport after 11 pm local time, police said.

It lasted only a couple of minutes and was over by the time police responded to the scene, Craig McCartt, the Indianapolis police department's deputy chief, told a news briefing on Friday.

President Joe Biden on Friday called US gun deaths a "national embarrassment" after the Indianapolis shooting.

But Biden insisted he could stem gun violence while also pushing a sweeping jobs package and working to rein in the coronavirus pandemic.

"This has to end. It's a national embarrassment," Biden said at a White House press conference alongside Japanese Prime Minister Yoshihide Suga.

Biden said Congress should ban military-style "assault" weapons and large-capacity ammunition magazines. Biden authored a similar ban in the US Senate that expired in 2004.

The Indianapolis shooting was at least the fifth such event in as many weeks, an unwelcome return to frequent high-profile violence as many in the nation emerge from a pandemic bubble.

Biden has taken limited steps so far to tighten federal gun regulations, and has called for more money to fight the problem.