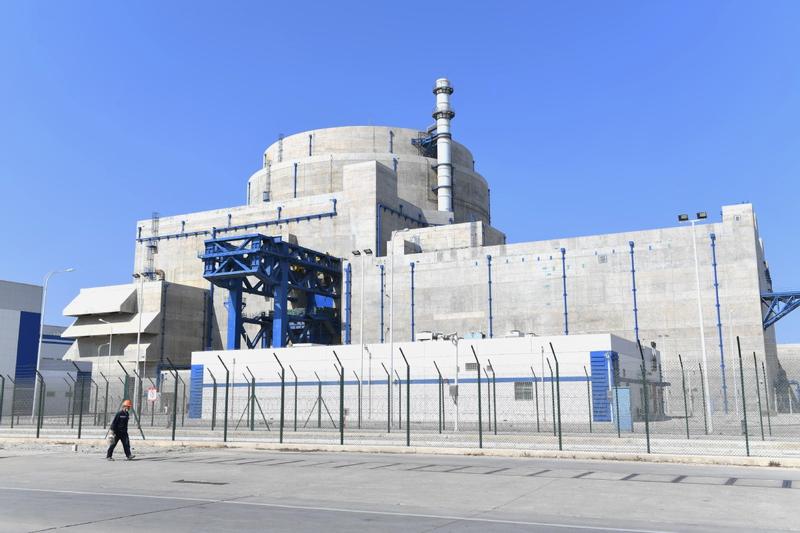 The nuclear power industry in China has entered a high-quality development phase with a complete chain of related equipment makers and is capable of producing eight to 10 primary devices each year, said the chief economist of the National Energy Administration.

China has already become one of the important industrial centers of global nuclear power development. It has 66 units currently under operation. Construction of a total installed capacity of 70.77 gigawatts is underway.

In this segment, China is ranked the second-largest worldwide, said Guo Zhi of the NEA during the 14th China International Exhibition on Nuclear Power Industry 2021 held in Beijing on Wednesday.

China's self-developed third-generation technology can substantially reduce the risk of radioactive leakage to prevent long-term effects on ecology, the environment and the public, said Ye Qizhen, an academician at the Chinese Academy of Engineering

China's safety standards in nuclear power reflect the world's highest nuclear norm, while the country's self-developed third-generation technology can substantially reduce the risk of radioactive leakage to prevent long-term effects on ecology, the environment and the public, said Ye Qizhen, an academician at the Chinese Academy of Engineering, during the exhibition.

Ye's comment came after the Japanese government announced on Tuesday it will release Fukushima's contaminated radioactive wastewater into the Pacific Ocean in around two years, sending shock waves across the world as experts deem it a potential risk to humanity.

Both Beijing and Seoul have expressed strong objections and dissatisfaction over Japan's unilateral decision that disregarded the opposition of the international community, especially of China and the Republic of Korea, its two important neighbors.

"Authorities in China have a track record of being highly cautious and conservative when it comes to nuclear safety, even though in some cases this might have slowed down approvals or construction of new units," said Joseph Jacobelli, an independent energy analyst and a senior adviser on Asia at Cenfura, a smart energy services company.

"The key to long-term growth of the nuclear sector is raising the amount of local content and successfully accelerating the development of next-generation nuclear plants, which is also key to ensuring extremely high levels of safety," said Jacobelli.

China will steadily advance its nuclear power development under the premise of ensuring safety, against the backdrop that the country aims to have carbon dioxide emissions peak by 2030 and achieve carbon neutrality by 2060, according to the China Nuclear Energy Association.

Nuclear power will play a more significant role in China's energy mix going forward, with the country expected to approve the construction of six to eight reactors each year to gradually push forward its nuclear development between 2020 and 2025, according to the China Nuclear Energy Association.

The association estimated the country's installed capacity of nuclear power in operation will reach 70 GW by 2025 with that for the nuclear power under construction reaching 50 GW.

According to the China Nuclear Energy Association, China has put into operation 20 new commercial nuclear units during the 13th Five-Year Plan period (2016-20) with a newly added installed capacity of up to 23.45 GW.

Total number of commercial nuclear power units reached 48 with a total installed capacity of 49.88 GW, the third-largest globally, according to the Blue Book of Nuclear Energy released on Wednesday.

Nuclear power makes up just around 5 percent of China's total electricity generated, compared with 70 percent in France, 19 percent in the United States and 12 percent in Germany, according to Bloomberg New Energy Finance.

Power generated by nuclear plants in China over the past 10 years played a significant role in the country's energy supply and carbon emissions reduction, he said.