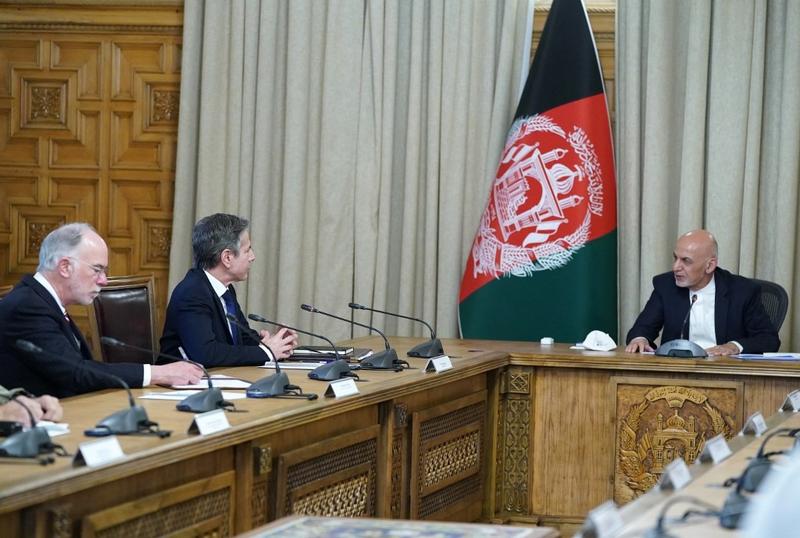 In this handout photograph taken on April 15, 2021 and released by Press office of President of Afghanistan shows US Secretary of State Antony Blinken (2L) with Afghan President Ashraf Ghani (R), in Kabul. (AFGHAN PRESIDENTIAL PALACE / AFP)

KABUL - Afghan President Mohammad Ashraf Ghani and visiting US Secretary of State Antony Blinken exchanged views Thursday on the withdrawal of US troops and the war on terrorism, the office of the Afghan president confirmed.

Ghani told Blinken that Afghanistan respects the US president's recent decision to draw down US troops, adding the Afghan government will ensure a smooth transition, according to the statement

During the meeting held in the Afghan Presidential Palace, the Afghan president stressed the common struggle of all countries against terrorism, the presidential office said in a statement.

The meeting came one day after US President Joe Biden announced that Washington would end its longest war by starting to pull out troops from Afghanistan on May 1 and would complete the process by Sept 11 this year.

Ghani told Blinken that Afghanistan respects the US president's recent decision to draw down US troops, adding the Afghan government will ensure a smooth transition, according to the statement.

The Afghan leader was quoted in the statement as saying that the Afghan National Defense and Security Forces (ANDSF) were capable enough to defend their country and ensure security across Afghanistan.

The top US diplomat said the United State will continue to provide diplomatic and humanitarian support to Afghanistan and its security and defense forces even after the full withdrawal of its forces.

At the end of the meeting, the two sides agreed to continue negotiation to advance the transition and the start of a new chapter in their bilateral cooperation.

ALSO READ: Biden to begin US troop exit from Afghanistan on May 1