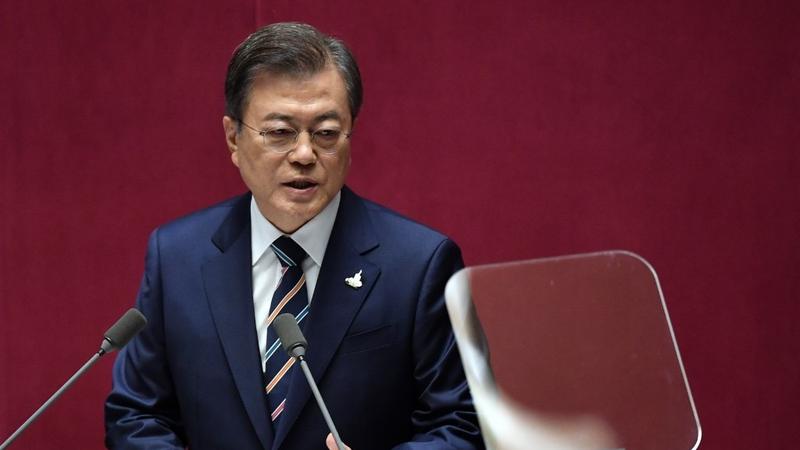 SEOUL - South Koreans disillusioned with President Moon Jae-in’s ruling Democratic Party had a single word to sum up their disgust with political leaders they perceive as hypocritical and inept.

The taunt began ringing in Democrats’ ears last year, and they heard it a lot while campaigning for mayoral elections in Seoul and Busan this week, contests they lost by embarrassing margins.

Many voters have been angered by perceived hypocrisy over graft and sex abuse scandals in a party that came to power in 2017 vowing to clean up politics after Moon Jae-in’s conservative predecessor, Park Geun-hye, was impeached and jailed in a corruption case

Limited to one term in office, Moon enters his last year with a majority in parliament, but his government has made damaging policy missteps.

And many voters have been angered by perceived hypocrisy over graft and sex abuse scandals in a party that came to power in 2017 vowing to clean up politics after Moon’s conservative predecessor, Park Geun-hye, was impeached and jailed in a corruption case.

Runaway home prices and deepening inequality have also contributed to popularity ratings plummeting to record lows for both Moon and his party in recent months.

That could jeopardize Moon’s efforts to achieve final policy goals, including reforming a prosecutor’s office that his party views as too powerful and too politicized.

Scandals over party members accused of amassing wealth and abusing power to secure favors for their family have left the Democrats in need of an image make-over before next year’s national elections.

“Moral superiority had long been the liberals’ strength over the conservatives who were often embroiled in corruption scandals,” said a 46-year-old voter who only gave her surname Shin.

“But the Democrats’ ‘naeronambul’ attitude has become so prevalent, and combined with their total economic disaster, no way would I vote for them.”

The national election commission went so far as to ban the use of terms like “naeronambul” and “hypocrisy” in election slogans saying it was linked too specifically to one party, prompting the conservative opposition to mockingly declare that the agency officially recognised the ruling party is hypocritical.

The Democratic Party’s interim chief apologised on Friday for “people’s anger and disappointments,” saying it would strive to “claw out of the quagmire of naeronambul as soon as possible.”

The term first began to be widely used last year when then-Justice Minister Cho Kuk, one of Moon’s closest confidants and a well-known critic of corrupt officials, resigned only a month after taking office amid a scandal over falsifying documents on family investments and illicitly securing university admissions for his children. He has denied wrongdoing.

Sex scandals embroiled the Democratic mayors of Seoul - who was found dead after being accused of sexual harassment - and Busan, which left both seats open to be seized by conservatives in Wednesday’s elections.

Home prices in Seoul, meanwhile, have surged more than 50 percent since 2017, the fastest pace in the world, according to statistics site Numbeo, generating widespread economic anger.

The soaring property prices and political scandals collided earlier this year when employees of a state housing developer, politicians and other officials were accused of insider land trading, and Moon fired a senior aide after he was found to have raised rent on a property just before curbs were introduced.

Younger generations and politically neutral voters have especially expressed disgust over the “naeronambul” traits. Vote counts showed that 72.5 percent of men in their twenties voted for the opposition candidate for Seoul mayor, more than three times the 22.2 percent who supported the Democrat contender.

“The public sentiment over the administration’s morality might deepen given ongoing scandals and various investigations,” said Kim Hyung-joon, a political science professor at Myongji University in Seoul. “And that could expedite Moon’s lame-duck status, and possibly bring a policy vacuum before the election.”