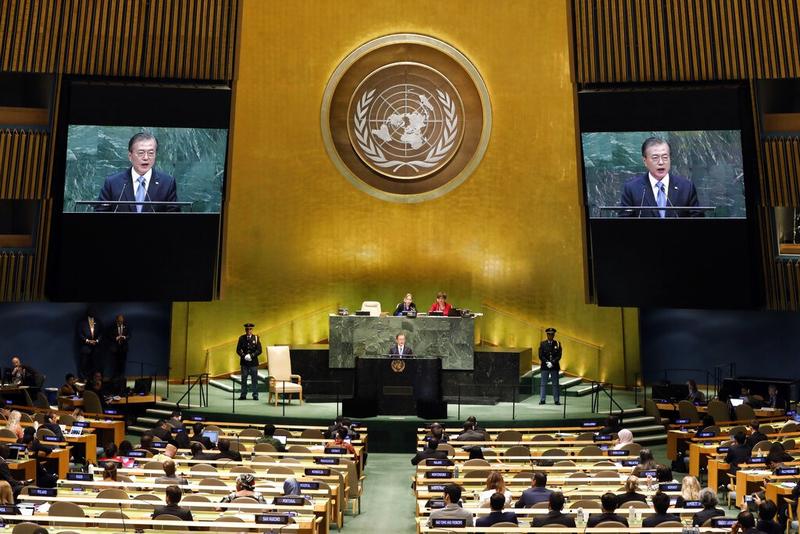 Moon, who has long pushed for closer ties between the Koreas, also told leaders gathered at the UN General Assembly in New York that his nation "will guarantee the security of North Korea. I hope North Korea will do the same for South Korea."

Despite a string of summits between Moon and Kim Jong-un, and between US President Donald Trump and Kim, there is a lingering standoff over how to get DPRK to abandon its nuclear and missile program

Despite a string of summits between Moon and Kim Jong-un, and between US President Donald Trump and Kim, there is a lingering standoff over how to get DPRK to abandon its nuclear and missile program.

Moon was a driving force behind the diplomacy that led to the historic summits. Trump, after trading insults with Kim in 2017, became the first sitting US president to meet with a DPRK leader in 2018. And in June he was the first to step into DPRK's territory.

Trump said Monday at the United Nations that another meeting with Kim "could happen soon" but didn't provide details.

Moon said Trump's walk with Kim into DPRK "was a remarkable step that will go down in the history of peace on the Korean Peninsula and in Northeast Asia. I hope both leaders will take yet another huge step from there."

Despite the summits, DPRK has staged a series of short-range weapons tests that has rattled ROK and Japan. Outside analysts believe DPRK might be trying to gain leverage in future nuclear negotiations.

Pyongyang wants relief from crushing sanctions imposed over its push for nuclear-armed missiles that can viably target the US mainland, but Washington wants stronger nuclear disarmament steps first.

Moon said in his speech that mutual security assurances would allow faster nuclear disarmament and peace on the Korean Peninsula, which is still technically in a state of war.

"The two Koreas and the United States are setting their sights not only on denuclearization and peace but also on the economic cooperation that will follow thereafter," Moon said.

He called for an "international peace zone" in the Demilitarized Zone, a heavily fortified border separating the two Koreas — an idea that's been generally proposed before. He said he hoped the DMZ could house UN offices and other international organizations.

"If North Korea makes sincere efforts to implement denuclearization, the international community should also reciprocate," Moon said. "The establishment of an international peace zone will provide an institutional and realistic guarantee to North Korea's security. At the same time, South Korea will also be able to gain permanent peace."