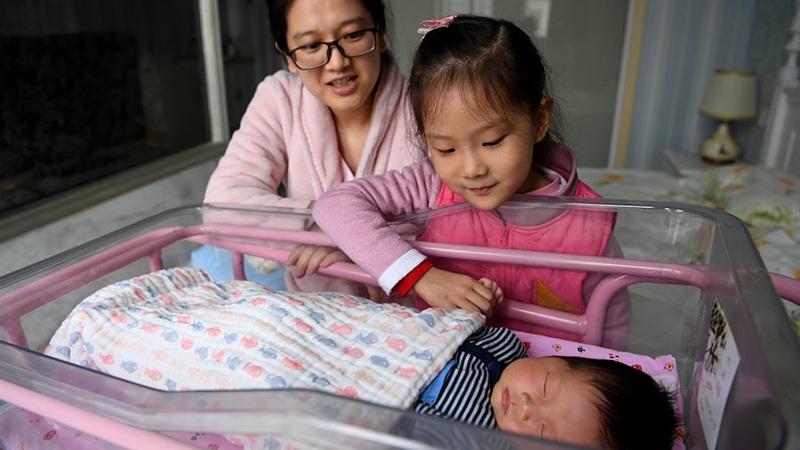 A mother and her daughter watch over the family's newborn baby at an infant healthcare center in Hefei, eastern China's Anhui province. (PHOTO / XINHUA)

Just as Beryl Yip and her fiance were rubbing their hands in anticipation of their lavish, painstakingly curated wedding to be graced by hundreds of relatives and friends, the coronavirus struck. They had the setting all in place by March last year - seven months ahead of the big day - but the scourge laid everything to waste.

"It was a rare leap year in 2020 and was believed to bring good luck. Wedding venues had been booked to the hilt early last year. We thought we were really lucky as we had reserved a sumptuous villa on Oct 10, an auspicious date," Yip recalled.

The Instagrammable pictures that had envisaged a grandeur wedding scene immaculately and elaborately adorned, with guests dressed to the nines offering heartfelt wishes, a holy moment of the couple strutting down the aisle, exchanging vows, and a platonic pre-wedding shoot in the Tibet autonomous region suddenly went out of the window.

Yip had no choice but to scrap or put off the bookings if possible. She wasn't alone - she also had many friends in the same situation, some having lost HK$300,000 (US$38,580) due to the disruptions caused by the pandemic.

But the disappointment pales in comparison to her extreme distress of passing her prime time for pregnancy. She's now in limbo. The couple had their future meticulously mapped out - moving to Canada after their marriage and having a baby within two years there. "Our plans completely evaporated," Yip said.

"If we were to put aside having a baby until we've resettled in Canada, I would probably be too old for it then. But if we were to have a child this or next year, immigration wouldn't be a sensible option until the kid reaches kindergarten age."

There's also Rolin Zhang, who had planned to get hitched last year to round off a marathon nine-year romance with her boyfriend. Again, it was scuttled by the pandemic. Her parents on the Chinese mainland were to have witnessed them tying the knot in Hong Kong. But it just wasn't possible with the strict travel curbs in place.

With many couples in the same situation, Hong Kong saw the number of deaths outnumbering that of births last year for the first time in its history. From January to November 2020, there were about 39,900 births, down by 17 percent compared with the same period in 2019, and 45,400 deaths - an increase of 4 percent

"My parents had once objected to our relationship, and we thought we had to get our two families together to seal the bonds first. They haven't met till now, so we're still unmarried," Zhang said.

"We've saved some money over the years to prepare for our child's upbringing and education. While I sat on the fence about giving birth as it would involve hefty expenses in Hong Kong, I was, in fact, ready for it (before the pandemic)," she said. "But now, I have to leave it out of my agenda."

Both Zhang and her boyfriend work in the insurance sector, with many of their clients being from the mainland. COVID-19 has robbed them of 90 percent of their prospective clients. "I think we now have to forget about having a child at least until the situation returns to normal. To the middle-class like us, raising a child in Hong Kong is no easy feat, and COVID-19 has made it more elusive," she said.

With many couples in the same situation, Hong Kong saw the number of deaths outnumbering that of births last year for the first time in its history. From January to November 2020, there were about 39,900 births, down by 17 percent compared with the same period in 2019, and 45,400 deaths - an increase of 4 percent.

ALSO READ: Country tries to solve challenge of the ages

Paul Yip Siu-fai, chair professor of population health at the University of Hong Kong, said it's a woeful landscape of the current demography, which is also true of other Asian regions, such as Taiwan, Singapore and South Korea. "If there's no substantial growth in the fertility rate to compensate for the rising death toll, the fertility pattern will continue over the next few years," he said.

The result will be fewer people coming to live in Hong Kong and more people leaving. The battered economy arising from the virus outbreak, as well as the social instability in 2019, has tarnished Hong Kong's appeal, deterring people from thinking of living, working or studying in the city, and forcing more residents to seek greener pastures elsewhere, Yip said. "This 'push-and-pull' factor is likely to further reduce our fertility rate," he said.

Repeated school closures and inaccessibility of childcare services amid the pandemic can also affect the fertility rate to some extent in higher socioeconomic settings, according to a paper titled "The COVID-19 Pandemic and Human Fertility", published in the US' Science magazine in July. The nuisance of a disrupted work-life balance can drive people away from contemplating having a child or more children, it said.

For childless couples, a vital consideration deterring them from conceiving is the "breakdown of informal extended-family childcare networks" in a health crisis, said Joshua Wilde, a research scientist at the Germany-based Max Planck Institute for Demographic Research. Grandparents who mostly share the burden of babysitting are unable to do so because of the social distancing restrictions.

Sheila Xia, who divides her time between babysitting and teaching at an international school in Hong Kong, knows what's it's like tending to a newborn baby during the public health crisis. She gave birth to her second daughter at the wrong time - in March last year - as the coronavirus unleashed its fury. "Life had been so tough after I got pregnant. It coincided with the social turbulence, and COVID-19 turned our lives upside down," she said.

Xia couldn't get her parents-in-law, who are in Shandong province, to look after the baby. Although the pandemic had eased later, she gave up the idea of hiring a domestic helper for fear that the maid might get infected elsewhere. "While we're not first-time parents, my husband and I are still in a spin and worn to a frazzle. I often ask myself: How can we get through this?"

Ultimately, the couple did send their baby girl to the mainland to be in the care of her grandparents after undergoing a two-week quarantine in Shenzhen. Xia took six months' unpaid leave to enable her to stay with her baby longer and give herself a respite. It was too much for her to bear in the first two weeks after she returned to Hong Kong. "Each night, I scrolled my phone's photo album with my children's photos, and cried until I fell asleep," she said.

Costs of raising a child

There's every reason for the SAR's stubbornly low fertility rates. Raising a child in the city costs an arm and a leg. It sets back a middle-class family by an average of HK$5.5 million from a child's birth to college graduation, according to a report by the Hong Kong Bauhinia Foundation Research Centre in 2014. The monthly cost of HK$20,800 for raising a child would take up a big chunk of a middle-class family's household income, which stood at HK$33,000 for a family of four in 2014.

"The major factors affecting the local fertility rate are the mother's education and the cost of raising a child, along with housing costs, which play the biggest role empirically," Wilde said. "The high cost of housing is a key constraint."

It's common in Hong Kong that married adults have intergenerational obligations, which are mentally, physically and financially taxing, said Stuart Gietel-Basten, a professor of social science and public policy at the Hong Kong University of Science and Technology. "The heavy family onus dissuades young people from getting married," he said.

While a high number of Hong Kong women are working as employment has shifted from industries and services, "the penalty is high for women to have children," Gietel-Basten said. Women with children or planning to give birth could be turned down for a job or denied promotion.

The major factors affecting the local fertility rate are the mother's education and the cost of raising a child, along with housing costs, which play the biggest role empirically.

"The pandemic has created even greater uncertainties for the financial status of couples, and more pressure on those already living in a fast-paced society. It's no surprise seeing a decline in the fertility rate," said Wei Chen, Wilde's research partner.

If the low fertility rate continues for too long, the local economy and labor market will suffer, Yip warned. "It will mean a shrinking young population in the labor force." Youths, with the passion, entrepreneurship, energy and a fast-forward mindset, are vital for a company or an industry in maintaining its vitality. It will also amplify the aging problem, which Hong Kong has been grappling with, such as over-dependence on medical care and community services, he added.

Nevertheless, Gietel-Basten suggested that one must be cognizant of the difference between "how many children people have at given years" and "how many they have in the course of their lives" before reassessing the impact of Hong Kong's low birth rate.

His caveat was inspired by parallel events that have occurred in history. During World War II, the fertility rate dived dramatically, but it caught up notably from 1945 to the 1960s, resulting in a baby boom. "This is, as we call it, a 'tempo effect'," he explained.

There's every chance that the baby bust during the coronavirus crisis will be compensated for by a baby boom later on, he said. Therefore, there's likely to be a period effect rather than a cohort effect. But the irregular and uneven distribution of the fertility rate is likely to dent Hong Kong's economy, education and employment for some time, Gietel-Basten said.

For example, primary schools will have a hard time recruiting age-appropriate children within a given time in the future, which will entail an overhaul of teaching resources and arrangements. "But we just don't know exactly how long the effect will be and when the situation will pan out," he said.

He noted that it's common to see fertility rates stage a rebound following calamities in the past, citing the 2006 tsunami in Indonesia as an example. The disaster led to reduced fertility, followed by a fairly sharp rebound. "But this case was different (from COVID-19) because many of those killed in the tsunami were children, and parents had additional children to replace those who were lost."

That would not be the case with COVID-19 because the coronavirus kills mainly the elderly. "This means any rebound in the fertility rate should be relatively muted compared with Indonesia's," explained Wilde. "I believe that the falling fertility rate is very much due to people simply putting off having children. Couples who want children will still have the same number of children, but they may just wait a bit. This is the best case scenario."

While we all hope for this to happen, it's wiser and imperative for policymakers to keep the worst case scenario at bay. Reducing the cost of raising children and providing a healthier living environment for raising them could be the fundamental solution for a society's low fertility rate, as well as stronger resilience in post-pandemic era.

"Therefore, the best thing that can be done is to make children affordable," Wilde said.