Country tries to solve challenge of the ages

As birthrates decline and the number of seniors increases, the nation is contemplating its policy options

Editor's Note: During this year's two sessions－the annual meetings of the National People's Congress and the National Committee of the Chinese People's Political Consultative Conference－China Daily is publishing a series of stories focusing on the achievements the country made in various fields during the 13th Five-Year Plan (2016-20). They show how the country met its development goals in different fields in the face of numerous challenges.

With the number of births expected to continue falling in China, experts have called for further policy improvements to ease the impacts on social and economic development caused by an aging population and shrinking workforce.

Demographics have been a major topic of discussion during the ongoing two sessions－the annual meetings of the National People's Congress, the top legislative body, and the National Committee of the Chinese People's Political Consultative Conference, the leading political advisory body. Proposals made range from adjusting the family planning policy to offering tax breaks to encourage couples to have a second child.

In a blueprint released last year mapping the country's development over the next five years and beyond, China's top leadership listed improving family planning to promote balanced population development as a key task of the national strategy to tackle an aging population.

Major measures include developing affordable nursery services, reducing the cost of child raising and education, and boosting elderly care industries and services, according to the blueprint.

The official number of births for last year has not been released yet; however, it has fallen in recent years despite the implementation of the universal second-child policy at the beginning of 2016.

In 2019, there were about 14.7 million births on the Chinese mainland, a drop of more than half a million over the previous year. It was the third consecutive year of falling births since 2016, according to the National Bureau of Statistics.

Meanwhile, the birthrate dropped to 10.48 per 1,000 people last year, the lowest level in seven decades. Many experts believe the trend will continue for the next few years at least, and a population decrease is inevitable.

Yuan Xin, a professor of population studies at Nankai University in Tianjin, expects the number of births last year on the mainland will have fallen again.

"The number of births last year will not exceed the level for the previous year, judging by factors such as people's decreasing willingness to have children, the fertility rate and the dwindling number of women of childbearing age," he said. If the trend continues, China will start to see a decrease in its population sometime between 2025 and 2030, Yuan said.

By the end of the century, the fall could be as drastic as 50 percent from the current level. Under such a projection, China would be the third-most populous nation behind India and Nigeria, according to a study published in the medical journal The Lancet in July. 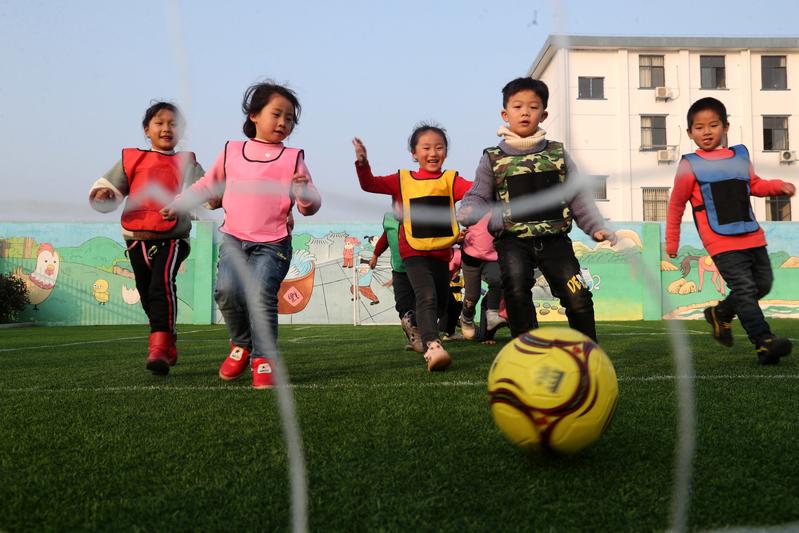 Children play soccer at a kindergarten in Dongxiang district, Fuzhou, Jiangxi province, in December. (HE JIANGHUA / FOR CHINA DAILY)

"China is undergoing tremendous demographic changes," Yuan said. "It will face an accelerating aging population problem in the future due to the declining birthrate and increasing life expectancy, which will have a far-reaching impact on social and economic development."

Experts have called for further adjustment to the family planning policy to cushion the impact of the demographic changes on social and economic development.

Lu Jiehua, a professor in population studies from Peking University, said there is a consensus among population experts that the second-child policy will be further adjusted to encourage more births.

However, more research is needed on the details, such as to what extent the policy will be relaxed and whether all couples will be allowed to have three children or as many as they want, Lu said.

Zheng Bingwen, a researcher in social security at the Chinese Academy of Social Sciences, said the family planning policy should be entirely relaxed during the 14th Five-Year Plan (2021-25), considering the sharp decline in the number of births in recent years.

In addition, supporting policies should be designed to establish a social environment that is favorable to child raising.

The policy measures should reduce the economic burden on couples who raise children and place greater importance on serving the growing elderly population, said Zheng, who is also a member of the National Committee of the CPPCC.

A survey organized by the National Health Commission found that the two main reasons the 2016 second-child policy had not fostered a population boost were ongoing concerns about the high cost of raising children and the lack of nursing assistance to care for babies. 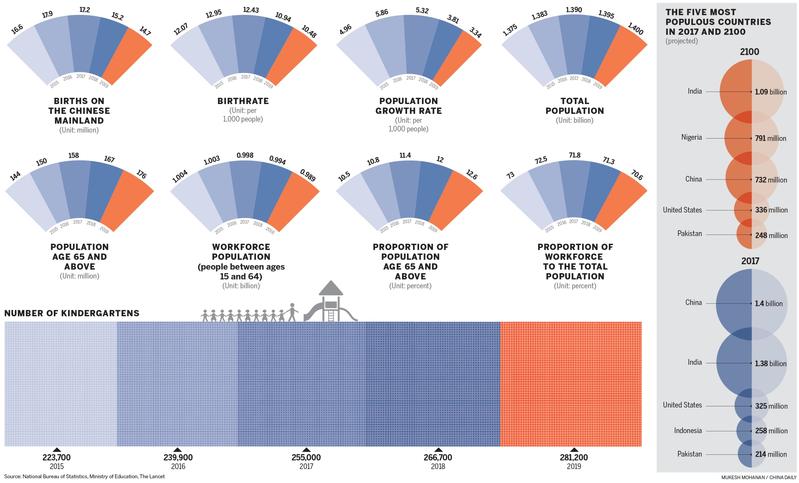 A major hurdle that deters couples from having children is the serious shortage of affordable nursery facilities and kindergartens in China, forcing parents to send their infants to costly private facilities, said Lin, who is also an NPC deputy.

However, if the existing family planning policy is relaxed it is still unlikely to solve the numerical imbalance of China's rapidly aging population.

"Even if the birthrate increases, it cannot fundamentally alleviate the effects of the graying population," Yuan, from Nankai University, said.

"The number of newborns today can only offset the aging population problem a couple of decades later."

You Jun, vice-minister of human resources and social security, said at a news conference last month that by the end of 2019, more than 18 percent of the population on the Chinese mainland was age 60 or older.

Yuan said by the middle of the century about 500 million people in China will be 60 or older, placing the country among the top ranks of nations with elderly populations.

However, an aging society coupled with a shrinking workforce does not necessarily mean China will lose its competitiveness in economic development, Yuan said.

"China can improve the overall quality of the workforce through improved education and training to cope with the decreasing workforce," he said.

In addition, various measures should be taken to tackle a graying population, including boosting economic development, improving the labor supply and the social security and medical insurance systems, and developing elderly care services, he said.