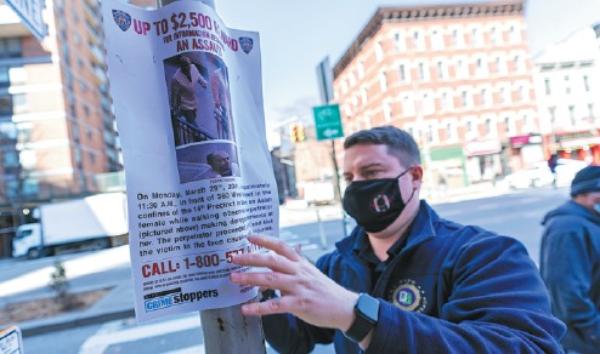 A police officer posts a sign offering a reward for information on the person who attacked an Asian-American woman in New York on Tuesday. The suspected attacker has been arrested. (MARY ALTAFFER / AP)

US President Joe Biden announced a number of federal actions on Tuesday aimed at countering violence against Asian Americans as New York and other cities across the country see a spike in hate-filled attacks against people of Asian descent.

"Across our nation, an outpouring of grief and outrage continues at the horrific violence and xenophobia perpetrated against Asian-American communities, especially Asian-American women and girls," the White House said in a statement.

Under Biden's initiative, the Justice Department will track reports of anti-Asian hate crimes and expand its outreach to community organizations. Also, the FBI plans to hold training sessions for state and local law enforcement officers, and other federal agencies are being directed to take additional steps.

The Department of Health and Human Services will spend US$49.5 million on programs to help victims of domestic violence and sexual assault within the communities encompassing Asian Americans, Native Hawaiians and Pacific Islanders. The National Science Foundation will spend US$33 million to study bias and xenophobia.

US President Joe Biden is ordering the Justice Department to launch training programs to promote reporting of hate crimes against Asian Americans on a local and state police level. The Justice Department's Civil Rights Division and the FBI will partner with the National Asian Pacific American Bar Association to draw up policies for combating anti-Asian hatred

The Department of Health and Human Services will also establish a task force to devise policies ensuring the administration's response to the coronavirus pandemic works to mitigate anti-Asian xenophobia and bias, with a particular eye toward violence against women.

The White House will reinstate the so-called Initiative on Asian Americans and Pacific Islanders, with an initial focus on counteracting bias and violence, officials said. Biden will soon pick a director to lead the initiative full time.

Biden also is ordering the Justice Department to launch training programs to promote reporting of hate crimes against Asian Americans on a local and state police level. The Justice Department's Civil Rights Division and the FBI will partner with the National Asian Pacific American Bar Association to draw up policies for combating anti-Asian hatred.

Attorney General Merrick Garland separately announced on Tuesday that he's ordering a 30-day expedited Justice Department review to ensure federal prosecutors make "the best and most effective use" of resources to combat hate against Asian Americans.

Tuesday's announcement from the White House also included a promise by the FBI to provide more transparency in its data reporting on anti-Asian hate crimes. Specifically, the bureau will launch a new interactive page on its Crime Data Explorer website spotlighting reports of such crimes.

The Biden administration's efforts were announced one day after a 65-year-old Asian-American woman, who was reportedly on her way to church, was kicked to the sidewalk in Midtown Manhattan and stomped on several times by a man who police said made "anti-Asian statements", including: "You don't belong here."

The woman was hospitalized with serious injuries and was discharged from the hospital on Tuesday after being treated, a hospital spokesperson said.

The attack was among the latest in a national spike in anti-Asian hate crimes, and happened just weeks after a mass shooting in Atlanta that left eight people dead, six of them women of Asian descent.

Police said the attack on the 65-year-old woman occurred on Monday morning on the sidewalk outside an apartment building on West 43rd Street. Surveillance video shows the man kicking the woman as she falls to the ground.

In the video, another person can be seen standing in the building's lobby watching but doing nothing to stop the attack or help the woman. The bystander then closes the front door, while the woman remains on the ground as the attacker casually walks away.

A 38-year-old suspect has been arrested and charged with felony assault as a hate crime, police said early on Wednesday.