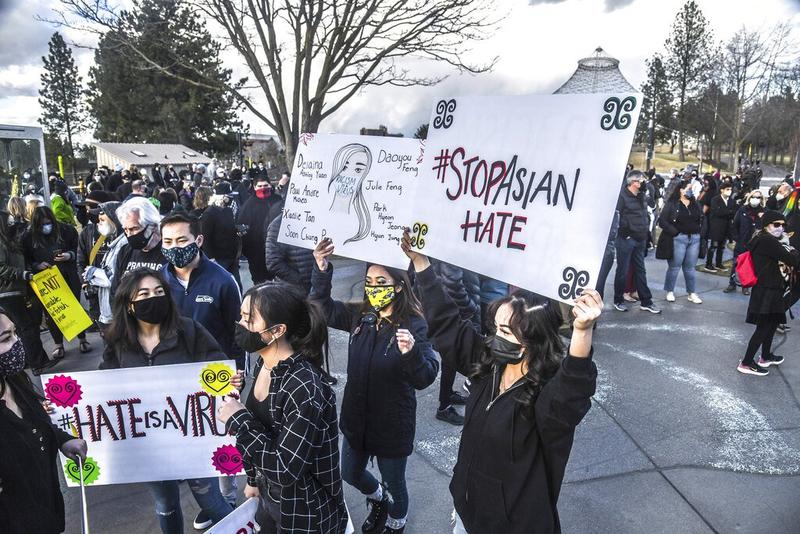 Mourning and anger were on display across the United States on Saturday as people of different racial and ethnic backgrounds denounced anti-Asian racism and publicly grieved for Asian women shot dead in Georgia by a white gunman.

From Atlanta and New York to San Francisco and other cities and towns, thousands gathered with signs, candles and flowers grieving for the eight victims－six of them were women of Asian descent－of Tuesday's shootings in Atlanta. They demanded authorities crack down on hate crimes against Asians.

In New York, hundreds of protesters gathered in Times Square and marched to Manhattan's Chinatown. In a separate event in Manhattan's Washington Square Park, hundreds more held a vigil for the Atlanta victims.

In Atlanta, about 200 people marched through the streets to join a much larger rally in a park across from the Georgia State Capitol, chanting "Stop Asian hate" and "We are what America looks like".

At that rally, billed as a #StopAsianHate event that would allow people to "come together to grieve, heal and support", they cheered speakers, including newly elected Democratic Senators Raphael Warnock and Jon Ossoff and Georgia State Representative Bee Nguyen, the first Vietnamese American to serve in the Georgia House.

"No matter how you want to spin it, the facts remain the same. This was an attack on the Asian community," said Nguyen, an advocate for women and communities of color. She noted the shooter targeted businesses operated by women of Asian descent.

"Let's join hands with our ally community and demand justice for not only these victims but for all victims of white supremacy."

The tragedy has prompted an outpouring of support nationwide.

A GoFundMe campaign to help the family of one of the victims, a single mother of two, had raised nearly US$2.3 million as of Saturday.

Robert Aaron Long, a 21-year-old white male, is accused of killing four people inside two Atlanta spas and four others at a massage business about 50 kilometers away in suburban Cherokee County on Tuesday. Another person was also shot but survived.

Investigators have said Long confessed to the slayings, but he said they were not racially motivated. He claimed to have a sex addiction, which caused him to lash out at what he saw as sources of temptation, according to authorities.

Police have said they are still working to establish a motive, including looking into whether the attacks can be classified as hate crimes.

Two officials who have direct knowledge of the investigation have not found evidence for federal hate crime charges. Prosecutors must prove the victims were targeted because of factors such as race or gender to meet the standard under federal law.

Local authorities are also investigating whether the attacks meet the standard for hate crimes under Georgia's law, passed last year.

A hate crime is not a standalone crime under the law, but it can be used to add time to a sentence once someone is convicted of another crime.

The group Stop AAPI Hate, which was formed in March during the COVID-19 pandemic to prevent discrimination against Asian Americans and Pacific Islanders in the US, said the shootings "will only exacerbate the fear and pain that the Asian American community continues to endure".

In a report issued on the day of the shootings, Stop AAPI Hate said it had received reports of 3,795 hate incidents against Asian Americans and Pacific Islanders nationwide between March 19 and Feb 28. But the group said the number could be higher because not all incidents are reported.

Most of the incidents took place against women, in businesses and on public sidewalks or streets, the report said. But the events included civil rights violations such as workplace discrimination or refusal of service and online aggravation or intimidation.