CPC draws strength from history amid its centenary 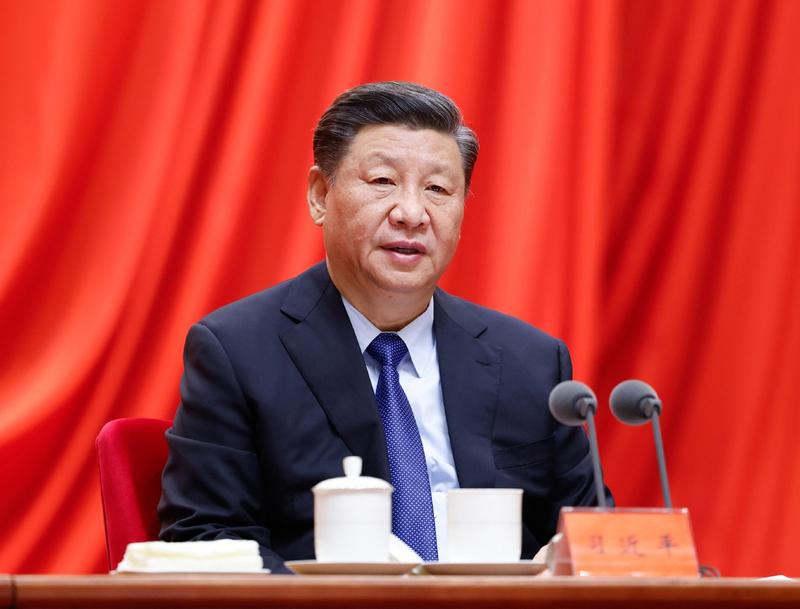 Xi Jinping, general secretary of the Communist Party of China (CPC) Central Committee, delivers an important speech at a key meeting to launch a campaign on Party history learning and education among all Party members in Beijing, Feb 20, 2021. (PHOTO / XINHUA)

One cannot understand China without understanding the Communist Party of China. When the world's biggest ruling political party launched a campaign of Party history learning and education among its members to mark its centenary, the motives behind it aroused widespread attention.

Xi Jinping, general secretary of the CPC Central Committee, has made it clear that an important task of the campaign is to reinforce all Party members' ideals and beliefs and to ensure that they remain true to the Party's founding mission so that they will unswervingly work to seek happiness for the people and the rejuvenation of the Chinese nation.

Xi Jinping, general secretary of the CPC Central Committee, has made it clear that an important task of the campaign is to reinforce all Party members' ideals and beliefs

Established in July 1921, the CPC has grown from a political party with only a few dozen members to a 91-million-member party that governs a country of 1.4 billion people. It has stood the test of time and reversed China's fate from the continuous decline since the Opium War in the 1840s to steady progress toward prosperity as the world's second-largest economy.

Experts said the ongoing campaign is a timely and necessary move for this century-old party to draw strength from its glorious past to advance the country's modernization drive despite the increasing challenges ahead.

The CPC reviews its history not to take comfort from its success, but to learn from history, improve its capacity to lead and govern, and withstand various risks at home and abroad, said Lu Xia, an associate professor at the School of Marxism Studies and a research fellow of the National Academy of Development and Strategy at Renmin University of China.

Lu said that in the past almost 100 years, the CPC has been insisting on theoretical innovation. "The key to this innovation is that the Party always adapts to the ever-changing external context while retaining its advanced nature as a Marxist-Leninist party, sticking to socialism with Chinese characteristics and always putting people first."

The campaign comes at a critical juncture at which the CPC is set to achieve its first centenary goal of completing the building of a moderately prosperous society in all respects, and embarks on a journey toward the second one, which is to fully build China into a modern socialist country by the middle of this century.

It also takes place at a time when the CPC improves its capacity to govern the country amid challenges caused by the profound changes to the international landscape unseen in a century.

When Xi joined discussions with legislators and political advisers during the two sessions earlier this month, he underlined the importance of the education campaign in building a stronger Marxist ruling party and striving for the great success of socialism with Chinese characteristics for a new era.

Speaking to deputies to the National People's Congress from the Inner Mongolia autonomous region, Xi stressed that "no matter how far we may go and how glorious the future is, we should not forget where we came from and why we started".

In discussions with legislators from Qinghai province, he said that through the education campaign, Party members and officials should be guided not to lose their direction amid the complex situation and not draw back when confronting arduous struggles.

The Chinese people, particularly young people and children, should be guided to better understand "why the CPC and Marxism work in China and why socialism with Chinese characteristics is good for the country", he added.

The campaign will focus on reviewing the glorious journey of the CPC's centurylong struggle and guiding all Party members to fully understand the Party's great contributions to the nation as well as the fundamental purpose of the Party to serve the people, according to a circular issued by the CPC Central Committee in February.

Xi sets great store by history. He particularly emphasizes revolutionary history, describing it as "the best textbook" for Chinese Communists. Over the past eight years, he has paid several visits to places with a milestone significance in the Party's history. These visits represent the CPC's efforts to rediscover the strength it needs in its unwavering quest for national rejuvenation.

For example, in October 2017, the CPC leadership, led by Xi, visited the replica of a historic boat in eastern China where the Party's dream set sail. In 1921, the founders of the Party, attending the First CPC National Congress, were forced to leave a small building in Shanghai where the meeting had been taking place. They then continued the proceedings of the congress in a boat on Nanhu Lake in Jiaxing, Zhejiang province.

In September 2019, Xi visited a revolutionary memorial site in the Fragrant Hills in suburban Beijing ahead of the 70th anniversary of the founding of New China. In March 1949, the CPC Central Committee made the Fragrant Hills its headquarters for half a year, where the Party led the War of Liberation (1946-49) to nationwide victory.

"We must be clearheaded and determined as preparing for tough tests to deliver performances that can withstand the test of time in the new era," Xi said during the visit.

Observers said that the campaign of Party history learning and education, along with previous thematic education campaigns such as "staying true to our founding mission", will become part of the prelude to China's journey of future success.

Qin Qiang, deputy director of the Research Center of the National Publicity Cadres Academy, said that drawing wisdom and strength from the Party's history and experiences has been the fine tradition and political advantage of the CPC in its development over the past century.

The ultimate purpose of learning Party history is to well understand and uphold the Party's development path, Qin said, adding that learning about the Party's history should be connected with the resolution of realistic problems.

In an article published in the Russian newspaper Pravda on March 4, General Secretary of the Communist Party of the Russian Federation Gennady Zyuganov hailed the great achievements made by the CPC and attributed this success to its tradition to learning from history and the people.

Upholding the principle of the people-centered philosophy is the main factor that ensures rapid development in China, Zyuganov said, adding under the leadership of the CPC, the Chinese people are capable of overcoming all the challenges on their path of developing socialism with Chinese characteristics.

He spoke highly of the CPC-proposed vision of building a community with a shared future for mankind and noted that the Belt and Road Initiative is the detailed procedure for establishing a world of long-lasting prosperity and justice.

The education campaign has won acclaim from the younger generation, as was shown by a popular TV series Juexing Niandai, or The Awakening Age, which debuted on China Central Television on Feb 1.

The TV series, focusing on the founding of the CPC and the Chinese revolutionary history, has stood out from the crowd of romantic and fantasy series on TV by getting rave reviews from young viewers in China. Thousands of netizens have reviewed the TV series on major Chinese media review platform Douban, where it has a rating of nine out of 10.

"The young viewers learned from the revolutionary pioneers not only in terms of history but also as a guide for their lifelong values," a netizen wrote.