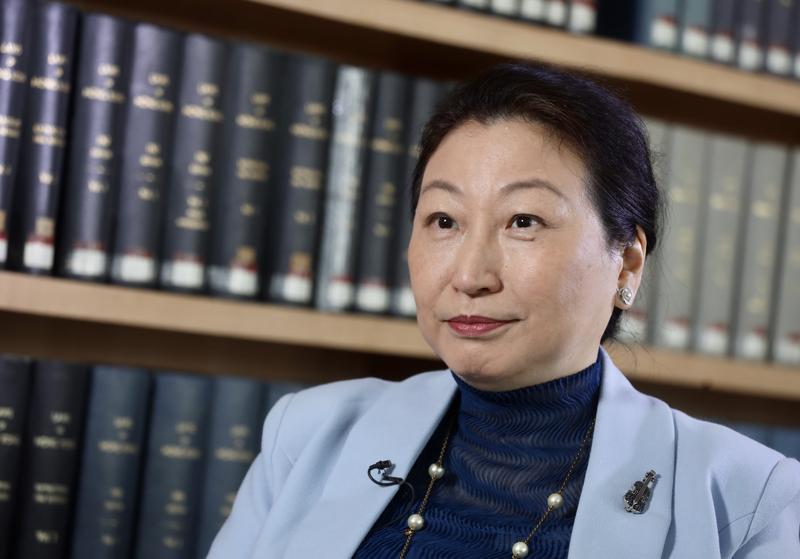 HONG KONG - Hong Kong Justice Secretary Teresa Cheng Yeuk-wah has held many titles and positions during her career as an arbitrator and law practitioner. But she takes great pride in being the first Chinese in many international groups to tell China’s story.

She has taken on “very big challenges” in her field to serve Hong Kong as well as the country, Cheng said in a face-to-face interview on Friday.

Justice Secretary Teresa Cheng Yeuk-wah recalled an international gathering at which an expert cited a case from 40 years ago to cast China as incompetent in handling arbitration. She stood up and pointed out that the case was an outdated example, and then updated the participants on the country’s judicial improvements

Cheng has extensive international credentials, including membership of the International Centre for Settlement of Investment Disputes’ Panel of Arbitrators. She is also a former member of the World Bank’s Sanctions Board. In 2008, she was elected the first Chinese and the first Asian female president of the Chartered Institute of Arbitrators, a leading dispute-resolutions body.

Cheng said she’s proud to be among the first Chinese to serve in such leading international institutions. She sees these positions and related conferences as opportunities to share her knowledge about China, and most importantly, to “clear the air” of false accusations made by speakers who were either ignorant of China’s latest developments or sought to discredit China’s systems.

She recalled an international gathering at which an expert cited a case from 40 years ago to cast China as incompetent in handling arbitration. She stood up and pointed out that the case was an outdated example, and then updated the participants on the country’s judicial improvements.

“I think it’s something that we should be able to do when the opportunity arises,” Cheng said.

Such voices are much needed, especially with stability restored in Hong Kong following the social turmoil in 2019 that attracted worldwide attention, she said.

Cheng called on everyone in Hong Kong to speak out to uphold the reputation of the rule of law and to stop the groundless defamation of it.

Some opposition groups and figures in Hong Kong, including several former lawmakers, have been lobbying certain Western countries to sanction the city or even China, claiming that the rule of law and the “one country, two systems” principle have been undermined.

“That’s not something that is a reflection of the patriotism of being a Legislative Council member,” Cheng said. This is why “there is really a need for improvements to be made to the electoral system”, to ensure those in power are really patriotic, she added.

Hong Kong’s electoral system is in for an overhaul after the National People’s Congress, the nation’s top legislature, adopted a decision on March 11 to empower its Standing Committee to amend Annex I and Annex II of the Hong Kong Basic Law, which prescribe the method for the selection of the special administrative region’s chief executive and the formation of its legislature.

In Cheng’s view, with the system improved, people with quality and with different views will be elected to serve in LegCo, leading to rational debates in the legislature, which saw frequent rowdy behavior and filibusters over the past few years.

Once rationality returns to the legislature and effective governance is ensured, it would in return boost the confidence of many to join the administration structure to use their expertise and knowledge to help build a better city, she said.