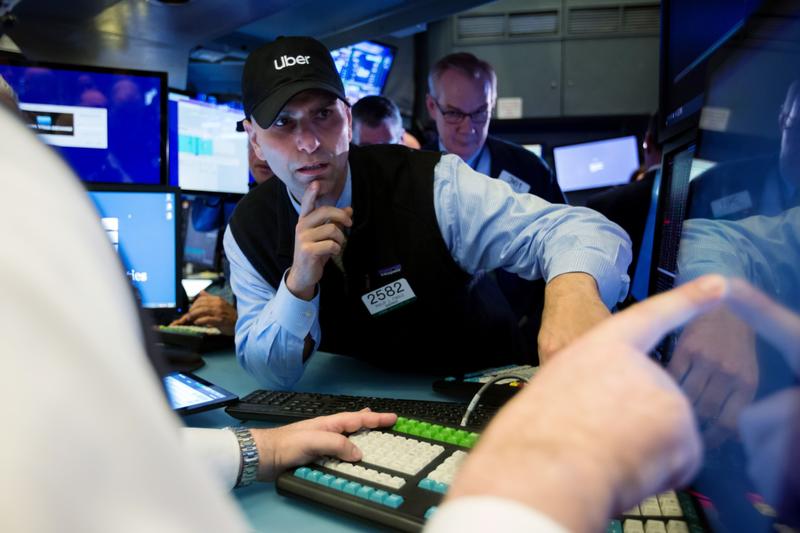 Traders work during Uber Technologies Inc's initial public offering (IPO) on the floor of the New York Stock Exchange (NYSE) in New York, US, on May 10, 2019. (MICHAEL NAGLE/BLOOMBERG)

The global market for initial public offerings is headed for its biggest-ever first quarter, even as skepticism grows about the US-led boom in blank-check listings that fueled the frenzy.

A record US$162.4 billion has been raised by more than 600 issuers in 2021, the most ever at this point in the year, data compiled by Bloomberg show, with special-purpose acquisition companies accounting for half of the proceeds. In comparison, just US$37 billion was raised in the first three months of 2020.

Unprecedented monetary and fiscal stimulus, ultra-low interest rates and - until recently at least - global markets at record levels helped fuel both traditional and SPAC listings, with issuers rushing to sell while investor demand is hot and valuations high. Stock prices have been underpinned by optimism that vaccines will tame the coronavirus pandemic, helping the economy to recover. 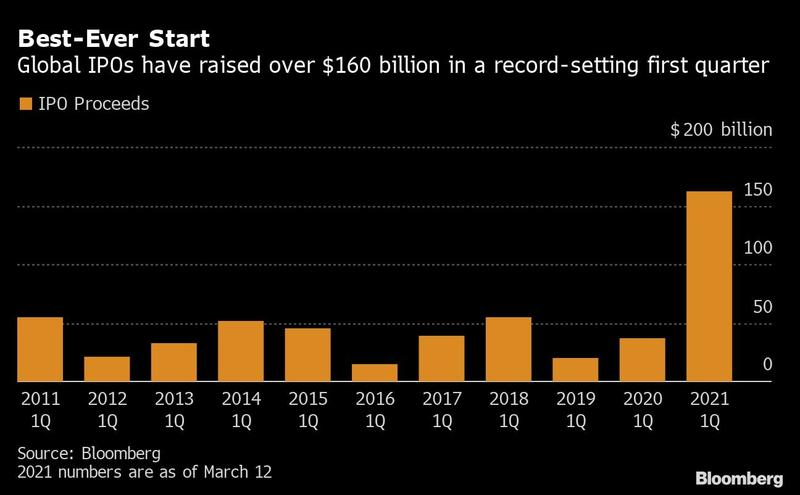 Now, markets are see-sawing as investors fret about rising bond yields and so-called pandemic-winner stocks lose traction. An index that tracks SPAC listings has dropped 17 percent from a February high, with worries mounting about a bubble in that corner of the market, while the US market regulator has cautioned retail investors against celebrity-endorsed cash shells.

Unprecedented monetary and fiscal stimulus, ultra-low interest rates and - until recently at least - global markets at record levels helped fuel both traditional and SPAC listings, with issuers rushing to sell while investor demand is hot and valuations high

“Volatility will weigh on the IPO market to the extent that investors may become more selective about the offerings they participate in, whereas when US indexes and tech stocks are booming, there’s a tendency for investors to be less selective,” said James Palmer, the head of equity capital markets for Europe, the Middle East and Africa at Bank of America Corp. But, “the strength of the IPO market is demonstrated by the fact that the quality offerings that are coming to market hasn’t diminished in any way.”

South Korean e-commerce giant Coupang Inc, which is backed by SoftBank Group Corp, boosted the price target for its US IPO, went on to price above that range and then soared 41 percent on its first day. The company raised US$4.6 billion this week in the biggest US listing since Uber Technologies Inc in 2019. Dating app Bumble Inc also surged in its debut last month after raising a greater-than-expected US$2.15 billion.

But there have also been a few soggy starts in the past few weeks, including by Chinese household insecticide company Cheerwin Group Ltd, which dropped 13 percent Wednesday in its Hong Kong debut, and Oscar Health Inc, which dropped 11 percent in its first session in New York on March 3, signaling that the big pops that were common just a couple of months ago may be a thing of the past.

“Demand for IPOs remains high, although as yields rise it is possible that some of the lofty valuations may need to be revisited,” said Lewis Grant, a senior portfolio manager at the international business of Federated Hermes. Still, “truly disruptive companies with a unique offering, particularly with a sustainable edge, are likely to find demand for their offering regardless of the wider market.” 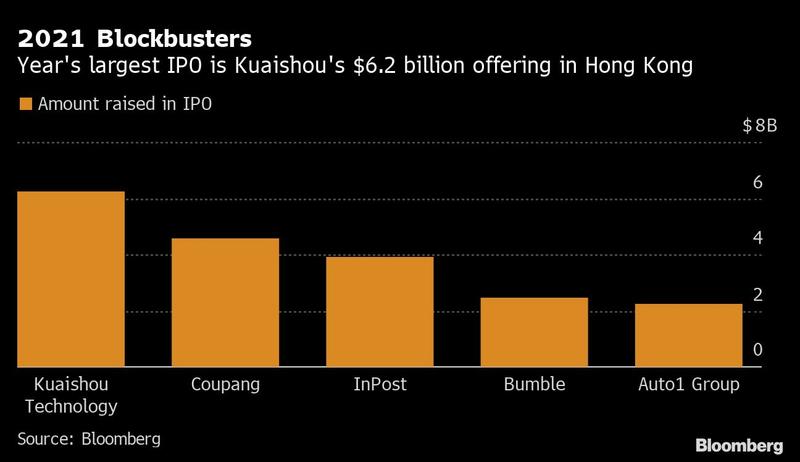 In Europe, where deals are pouring in after two years of subdued activity, companies are betting the scarcity of large offerings will drive demand. This week alone saw food-delivery company Deliveroo, a lockdown winner, and Vodafone Group Plc’s European mobile-phone mast unit Vantage Towers AG, an income play, lay out plans for billion-dollar listings in the region.

And bankers say the rotation out of tech and other stay-at-home stocks, on the back of rising expectations of an economic recovery and the end of coronavirus-induced lockdowns, isn’t all bad news for the IPO market.

“While the IPO market has mainly been driven by technology companies, we’re starting to see a broadening of the pipeline in terms of sectors and expect to see a greater breadth of sectors represented in the second half of the year,” said Richard Cormack, head of equity capital markets for Europe, the Middle East and Africa at Goldman Sachs Group Inc. “As companies in sectors that have been hit by the pandemic start to recover, investors will want to buy into that recovery.”

While companies can market themselves either as lockdown winners or recovery prospects, blank-check firms could prove to be a trickier sell, with the US Securities and Exchange Commission on Wednesday saying it is “taking a hard look” at disclosures and other structural issues.

Blank-check companies have no other business than to raise money in a listing and use that to acquire a private firm within two years. And everybody who is anybody has one, from sports figures to former US House Speaker Paul Ryan, a bevy of Asian tycoons and big-name European bankers.

“With changes at the SEC, SPACs in the US may come under greater regulatory scrutiny,” said Jason Manketo, global co-head of the equities practice at law firm Linklaters LLP.

But bankers are optimistic that the SPAC craze will be exported overseas, though only a handful of blank-check firms have listed in Europe and Asia so far.

Keen to cash in on the boom, exchanges including Nasdaq Nordic, the London Stock Exchange Group Plc, Singapore Exchange Ltd and Hong Kong Exchanges & Clearing Ltd are re-writing their rules - or at least looking into it - to ease the path to market for US-style cash shells.

“What has been so far predominantly a US phenomenon is now heading to EMEA in a fantastic way,” Viswas Raghavan, JPMorgan Chase & Co’s chief executive officer for Europe, the Middle East and Africa, told Bloomberg TV on Wednesday. “Fasten your seatbelts, because this move is coming to this region and we’re seeing a lot of inbounds from very high-quality folks wanting to raise SPACs.”

Three-fourths of SPACs included in this quarter’s tally of listings haven’t announced an acquisition yet, according to data compiled by Bloomberg, and will refund the offering proceeds if that doesn’t change before their deadlines. Those that do find targets to buy could remove candidates from the IPO pipeline, potentially weighing on future issuance.

Already, British firms Babylon Healthcare Services Ltd and Cazoo Ltd are said to have attracted takeover interest from SPACs. For owners seeking to sell their unlisted companies, the process is now “triple track,” with blank-check companies, acquisitions and IPOs all viable options, according to Manketo. “Right now, SPACs and IPOs are coming out on top.”