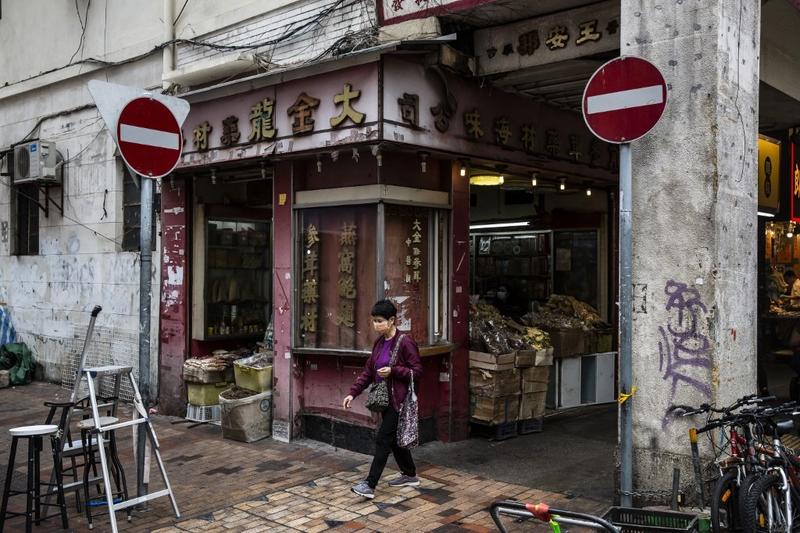 A woman (center) walks past a Chinese Medicine shop in the Kowloon district of Hong Kong on March 5, 2021. (ISAAC LAWRENCE / AFP)

In a media briefing, Chuang Shuk-kwan, head of the Centre for Health Protection communicable disease branch, said the three imported cases included two from the US and one from Canada.

There were five untraceable cases while about 10 persons tested preliminarily positive, she added.

Chuang said the untraceable cases included an employer, a programmer from Tsim Sha Tsui, a retired person, and a worker at the third runway of the Hong Kong airport.

According to the Hospital Authority, there were 213 patients being treated at Hong Kong hospitals and treatment centers as of Sunday, including 13 patients in critical condition, and 14 who were ins serious condition.

Soon after the arrival of the some 758 000 doses of the Comirnaty vaccine in Hong Kong, staff carried out a stringent inspection of the vaccines to ensure that it complies with the product specifications and that the transportation process follows the relevant cold-chain requirements.

The government would put the vaccines in validated ultra-low temperature freezers to ensure their proper storage.

People belonging to the five priority groups can now make reservations through the online booking system on the designated website of the COVID-19 Vaccination Programme for receiving the Comirnaty vaccine at the seven Community Vaccination Centres  operated by the HA for the period from March 10 to 30.