WHO sees Ebola risk as 'very high' for Guinea's neighbors 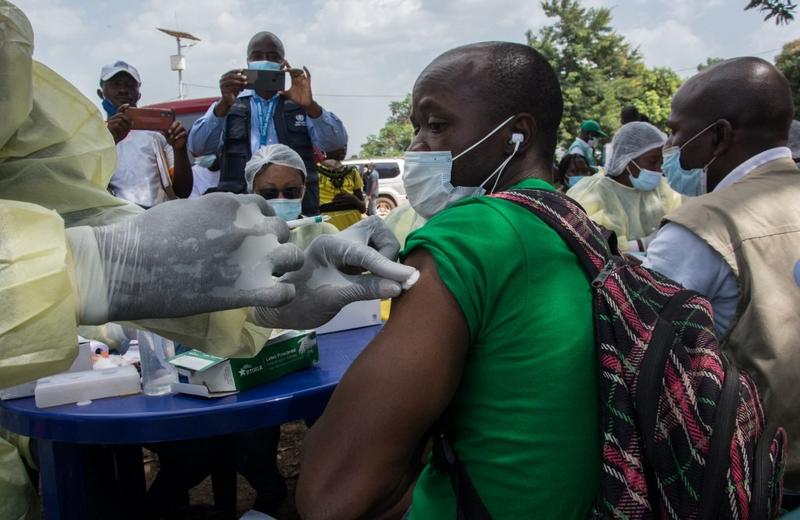 A health worker from the Guinean Ministry of Health cleans a suspected contact of an Ebola patient's arm ahead of administering an anti-Ebola vaccine in Gueckedou, Guinea, on Feb 23, 2021. (CAROL VALADE / AFP)

GENEVA - World Health Organization officials said on Friday the risk of an Ebola outbreak spreading from Guinea to its neighbours was “very high” and that some neighbouring countries were not prepared for outbreaks or for future vaccination campaigns.

WHO’s Guinea representative, Georges Alfred Ki-Zerbo, told a virtual briefing that 18 cases had been identified and four of those people had died.

So far, 1,604 people have been vaccinated against Ebola in the new outbreak in Guinea, the first resurgence of the virus there since a 2013-2016 outbreak - the world’s worst - which spread to several other West African countries and killed thousand of people.

The Ebola virus causes severe vomiting and diarrhoea and is spread through contact with body fluids.

“There are six neighbouring countries to Guinea and we conducted an assessment of readiness. Two of the countries are not ready and one is borderline and there are three countries more or less ready,” the WHO’s Regional Emergency Director Abdou Salam Gueye said by videoconference from Guinea.

He said none of the neighbouring countries was completely ready to start Ebola vaccinations, should they be required, and that there were not enough vaccines doses available in any case to begin vaccinating preventively.

“But those neighbouring countries agreed on cross-border cooperation and coordination to control the outbreak,” he said.

“We are dealing with quite fragile health systems including (lack of) capacity to address many public health challenges so dealing with both COVID-19 and Ebola remains a challenge,” said the WHO’s Dr Michel Yao, Director of Strategic Health Operations.

In a separate flare-up of a 2018-20 outbreak, the Democratic Republic of Congo has also reported new Ebola cases in recent weeks.