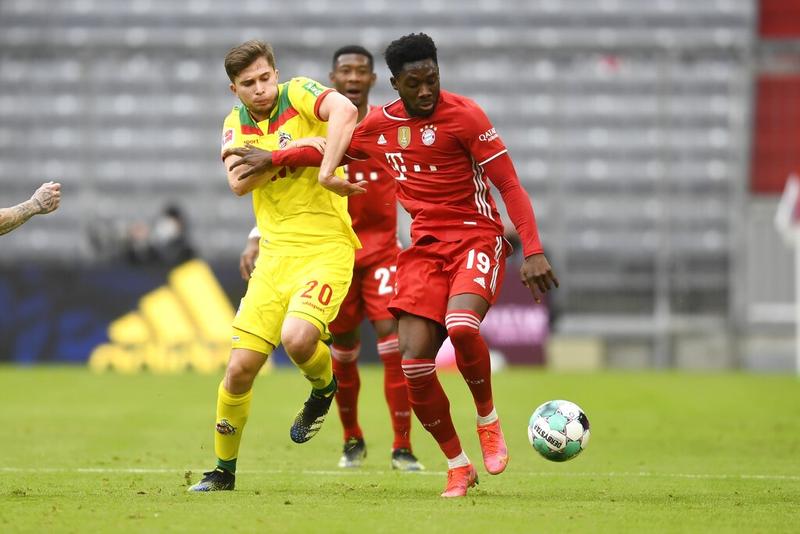 BERLIN - It might be one of the last challenges to find a more optimistic and confident player than Alphonso Davies in Bayern Munich's squad.

"He is always positive, smiling, and a fun guy in general," the Bavarians star striker Robert Lewandowski recently stated. The Pole not only praised Davies's always encouraging mood but also spoke about the Canadian fullback's potential.

"He is still very young but has enormous potential. He is aware it doesn't pay off to only count on talent. It needs hard work to make your way," the 33-year-old commented.

Talking to the 20-year-old, who made a stunning journey from the Vancouver Whitecaps for 10 million euros to one of the leading football sides in January 2019, it doesn't seem to need further encouragement.

In advance of the German Classico against Borussia Dortmund this Saturday evening, Davies is fully aware of his achievements but has ambitious future dreams.

"Every day is a challenge, training among a team of world-class players. It might be hard to get to the top. But being there, daily life is teaching you to fight for your place every minute," the Bayern youngster told Xinhua in an interview.

"It's a mindset case to decide about how hard you try to get to the top and stay there," Davies said.

In Munich, he can count on the help of established world-class teammates. "To see guys like Robert, Thomas Mueller, or Joshua Kimmich helps you to stay tuned," he added.

To enter the training pitch and experience his team-mate's effort is like collecting valuable bits and pieces and copy-paste them into his daily work.

"You learn a lot," he said. "The way they deal with setbacks and injuries is something I benefitted from."

In advance of the German Classico against Borussia Dortmund this Saturday evening, Davies is fully aware of his achievements but has ambitious future dreams

ALSO READ: Bayern back to winning ways with Cologne demolition

It helped him get over his low in the first half season as things weren't easy due to an injury. "I came from a good last season and had to learn to accept the break."

To experience to take injuries like a new challenge and a regular part of a footballer's life was a unique experience for Davies.

The Bayern talent praised his team's encouraging approach. "You feel the ambitions of the established ones enforced by the strong will of our youngsters. Guys like Jamal Musiala create a feeling for a bright future for everyone. They prove they want to get better and better every day," he said.

He quickly learned what it takes to prepare for a tight schedule having to perform in competition every two to three days.

"It is getting more and more to your mind; everything you do is dedicated to always met highest levels," he commented after 72 games in Bayern's shirt.

To see Lewandowski and Kimmich do just that every day makes you join the flow of effort more efficiently.

Davies spoke about his dreams, such as one day become Bayern's team captain and compete with other European football stars for the Ballon d'Or.

"In a younger age, it's vital to have dreams," he said.

He regards his enormous speed qualities as "talent, I developed when participating in track-and-field events." Back in his early years, he developed his desire for running, only interrupted by a failed try in the goal.

"Yes, I tried as a goal-keeper. But I discovered all this jumping and falling wasn't mine. My greatest admiration for the guys doing that challenging job, but running is more what I fancy."