By Karl Wilson in Sydney and Xu Weiwei in Hong Kong 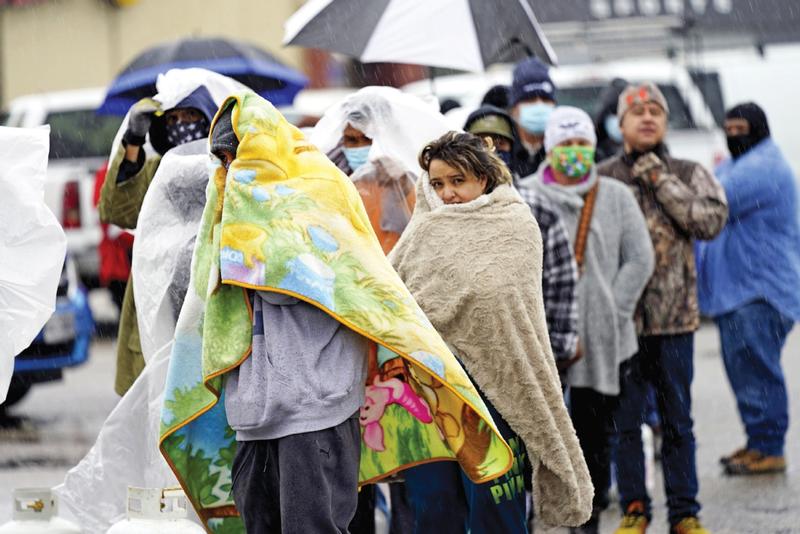 The big freeze in the United States, heavy snowfall in Southern Europe and the Middle East, melting glaciers in the Himalayas and melting polar caps, as well as deaths from extreme weather, have brought the global climate crisis into stark focus in the past few weeks.

“These disasters represent a clear and present danger, they are here, they are now, and they take lives and livelihood. They should flag the urgency in acting now,” said Vinod Thomas, a visiting professor at the National University of Singapore’s Lee Kuan Yew School of Public Policy.

While scientists have long warned about the growing impact of global warming, Will Steffen, a spokesman for the Climate Council in Australia and an expert on climate change, said it seems “counterintuitive when we talk about a warming planet, then we have these abnormal cold conditions”.

The unusual winter snowstorms and freezing temperatures that have cut a crippling swath across large parts of the US have led to at least 70 deaths and left millions of people without electricity and drinking water.

US President Joe Biden declared a major disaster in Texas on Feb 20, and the Federal Emergency Management Agency was shipping relief supplies to affected areas.

“What we are seeing in the United States is a rush of cold air sweeping down from the Arctic,” Steffen said.

Normally that cold air is held in check by a jet stream, or air current, which runs around the Arctic at a latitude roughly from mid-Canada through Siberia due to a strong temperature gradient between the hot equator and the cold Arctic.

But now, “the gradient between the equator and the North Pole is weakening, and cold air breaks through. When that happens, it drags warm air up,” Steffen said.

The freeze has therefore spread far. In Europe and the Middle East, heavy snowfall has blanketed the Acropolis and other ancient monuments in Athens and halted many services in Libya, Lebanon, Jordan, Syria, Saudi Arabia and Israel.

Last year, Judah Cohen, a climatologist at Atmospheric and Environmental Research, a US-based organization that helps businesses and governments anticipate and manage climate and weather-related risks, co-authored a paper that found a strong uptick in winter storms in the US north-east in the decade leading up to 2018.

This, Cohen and some other scientists argued, is a symptom of heating in the Arctic, occurring at a rate more than twice the global average, which is disrupting long-established climatic systems.

Indeed, in Siberia the melting of the permafrost is starting to alarm scientists.

In January 2020, the Yale School of the Environment, or YSE, warned in a report that “what we do know is that if the Arctic continues to warm as quickly as climatologists are predicting, an estimated 2.5 million square miles of permafrost — 40 percent of the world’s total — could disappear by the end of the century, with enormous consequences.

“The most alarming is expected to be the release of huge stores of greenhouse gases, including methane, carbon dioxide, and nitrous oxide that have remained locked in the permafrost for ages. Pathogens will also be released.”

The rapid thawing of permafrost has enormous implications for climate change.

According to the YSE, there are an estimated 1,400 gigatons of carbon frozen in permafrost, making the Arctic one of the largest carbon sinks in the world.

“That’s about four times more than humans have emitted since the Industrial Revolution, and nearly twice as much as is currently contained in the atmosphere.”

Meanwhile, it pointed to a report that projected that “a 3.6-degrees Fahrenheit (2 degrees Celsius) increase in temperature — expected by the end of the century — will result in a loss of about 40 percent of the world’s permafrost by 2100.”

The Climate Council’s Steffen said melting of the permafrost has resulted in an explosion of insects.

“The forests in Siberia and Canada are now being attacked by bark beetles, which weaken the trees and in hot conditions the trees burn, releasing more greenhouse gases into the atmosphere,” he said.

What is happening this winter in many parts of the United States “is consistent with research that has connected what’s happening in the Arctic with extreme weather patterns in the mid-latitudes”, said Jennifer Francis, a senior scientist at the Woodwell Climate Research Center in the US state of Massachusetts.

“The polar vortex can elongate, stretch into different shapes and even split. We have seen a very big disruption this year,” Francis said.

A report of the United Nations’ Intergovernmental Panel on Climate Change on oceans and the cryosphere — those parts of the Earth’s surface where water is in solid form, including ice caps and glaciers — showed that climate change has altered the frequency and magnitude of natural hazards, said Anjal Prakash, the 2018 report’s coordinating lead author.

The impact of global warming on glacial retreat is well documented, and high-elevation regions are warming more rapidly than the global average, he said.

If global temperature increase can be kept at less than 1.5 C above pre-industrial levels, this would still translate in the Hindu Kush Himalaya region to a rise of at least 1.8 C, and in some places, above 2.2 C, said Prakash, who is research director at the Bharti Institute of Public Policy of the Indian School of Business, a premier management education institute that has two campuses in India.

On Feb 7, a Himalayan glacier burst, causing a major flash flood in the northern Indian state of Uttarakhand, smashing two dam projects and forcing authorities to evacuate hundreds of villages.

Immediately after the incident, rescuers rushed to carry out efforts on several sites, including a tunnel more than 200 meters long to save some trapped victims. Apart from locals, authorities moved in disaster response force personnel, troops, paramilitaries and military helicopters to the state to help with rescue efforts.

The state government said on Feb 21

that the death toll in the dam disaster has risen to 67. Around 140 people were missing, and search for those people was underway.

“Himalayan regions are also the least monitored, and this event shows how vulnerable we could be,” Prakash added.

The causes of India’s glacier burst could be varied and complicated, said Li Dewen, a professor at the National Institute of Natural Hazards of China’s Ministry of Emergency Management.

Li said the impacts of global warming can be more readily seen in some areas, where it could be double what it is elsewhere, and dynamic monitoring with sensor technologies in sensitive areas can help.

Thomas, the visiting NUS professor, said that from the epic wildfires across Australia and the US last year, to the record heat of Siberia, climate change caused havoc across the globe in 2020. Parts of Siberia, which is not known for warm weather, saw temperatures rise to above 38 C last year.

“This year will probably be no different,” Thomas said. “The one good purpose this extreme weather can serve is to help policymakers and the public to connect the dots and act.”

On Feb 19, meanwhile, the US officially returned to the Paris Agreement on climate change, 107 days after it left the accord during the former Donald Trump administration.

UN Secretary-General Antonio Guterres said that he was particularly pleased to be commemorating the event with John Kerry, the US special presidential envoy for climate.

“Today is a day of hope, as the United States officially rejoins the Paris Agreement. This is good news for the United States, and for the world,” Guterres told a virtual event to mark the US re-entry.

“For the past four years, the absence of a key player created a gap in the Paris Agreement, a missing link that weakened the whole. So today, as we mark the United States re-entry into this treaty, we also recognize its restoration, in its entirety, as its creators intended,” he said.

The United States signed the Paris Agreement on April 22, 2016, and expressed its consent to be bound by the agreement by acceptance on Sept 3, 2016.

But Trump, a few months after taking office as US president, announced in June 2017 that his country would cease all participation in the agreement. The US withdrawal officially took effect on Nov 4,

On his first day in the White House, Biden, the new US president, signed a fresh instrument of acceptance on Jan 20, which was lodged with the UN secretary-general on the same day, enabling the US re-entry on Feb 19, in accordance with provisions of the Paris Agreement.

Xinhua contributed to the story.