By Yang Jun and Yang Wanli

The story of the Long March and the Red Army are being showcased at a famous tourist site in Southwest China. Yang Jun reports from Zunyi, Guizhou, with Yang Wanli in Beijing. 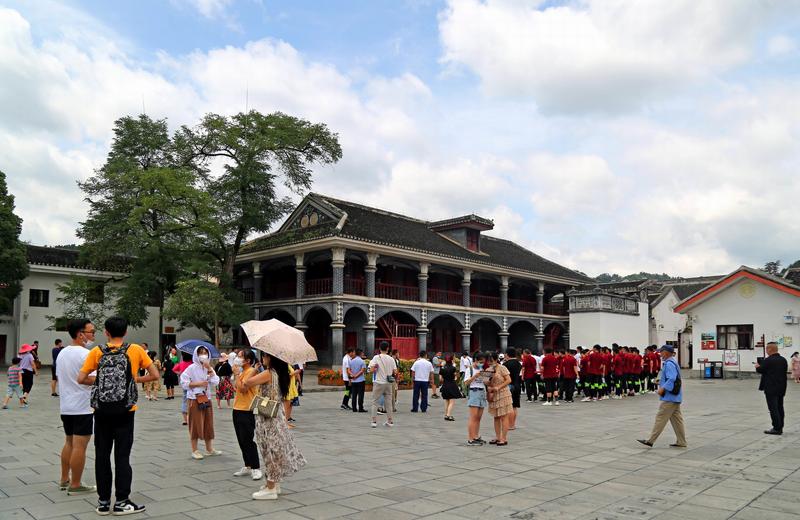 Over the past year, the number of visitors to scenic spots has declined as a result of regulations designed to reduce the risk of transmission of the novel coronavirus.

The Zunyi Meeting Site in Southwest China's Guizhou province is no exception. Famous for its significance in the history of the Communist Party of China, the site saw 2.61 million visits last year－half the number in 2019.

All those services will help to pass on the spirit of the Red Army. Only by learning about the past, can we gain a deeper understanding of our achievement and get a clearer picture of the future

He Ye, from the construction team of the Long March National Cultural Park

Despite that, Wang Zhili, deputy curator of the site's museum, said last year was his "busiest ever".

Since June, the museum's infrastructure has been improved and some new facilities have been built.

"The museum will be a crucial part of the Long March National Cultural Park, the first of its kind in China. By the end of this year, the site will have a fantastic new look," he said.

In 2019, the government issued a blueprint for the construction of national cultural parks related to the Great Wall, the Beijing-Hangzhou Grand Canal and the Long March (1934-35). According to the document, issued by the general offices of the CPC Central Committee and the State Council, construction will be completed in 2023 with related cultural resources enjoying better protection, along with improved inheritance procedures and utilization.

Fifteen provinces are involved in the program, including Guizhou, Jiangxi and Fujian (both in East China), and Shaanxi and Gansu in the Northwest.

Zunyi, in the north of Guizhou, will be an essential area in the construction of the province's section of the Long March park.

In 1935, the city, 170 kilometers north of Guiyang, the provincial capital, was the site of a pivotal meeting during the Long March.

In January 1935, an expanded meeting of the Political Bureau of the CPC Central Committee was held in Zunyi. It focused on rectifying errors in military and organizational affairs and established a new leadership of the Central Committee, as represented by Mao Zedong.

The Zunyi Meeting is regarded as the turning point of the Long March, leading to the ultimate success of the revolution. As a result, Zunyi has become a sacred spot for Party members.

The Zunyi Meeting Site, one of the city's best-known tourist destinations, is a north-facing, two-story building of brick and wood. It has been converted into a museum commemorating the Long March, and, as such, it will play a key role in the park's Zunyi section.

To ensure protection of the historical relics, visitors are not allowed to enter the second-floor meeting room where Mao built a position that allowed him to assume command of the military and become Party leader.

"It's a great regret to many travelers that they can't see this meeting room with their own eyes. However, thanks to the introduction of 5G technology and virtual reality, visitors can have an immersive experience," said Hong Min, a guide. 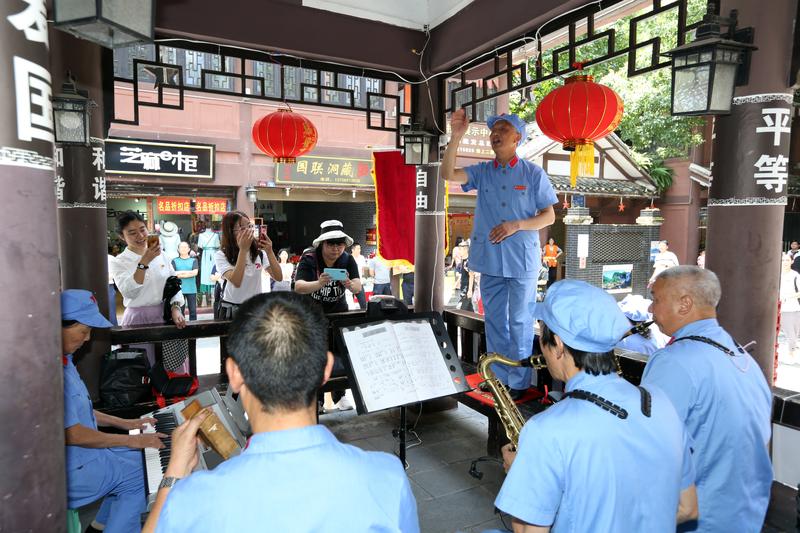 People sing 'red', or revolutionary, songs in the street in Zunyi in 2019. (SUN JIDONG / FOR CHINA DAILY)

The technologies are also being used at the house in which Mao lived in the city and at the site of the General Political Department of the Red Army, a forerunner of the People's Liberation Army.

Visitors can also view the museum's more than 1,500 historical relics via VR. By scanning QR codes placed outside the sites or under each relic, visitors can listen to an audio introduction to gain a deeper understanding of the relevant history. The service is free.

Taking the meeting site as its center, the park's Zunyi section will cover 13 surrounding counties, districts and cities, according to He Ye, an official from the leading team for the construction of the Zunyi section.

He said basic construction will be finished by the end of the year, while the region will see further improvements in tourism services from next year to 2025. More than 150 projects will be established over that time and about 31 billion yuan (US$4.8 billion) will be invested to support them.

In Zunyi, the Red Army's footprints are already deeply imprinted in the city's culture and spirit.

On a street near Dongfeng Primary School, a student who was leaving after class recommended mutton rice noodles, a famous local dish.

"It's well-known not only locally but also in other places across the country for the tender mutton and the fresh flavor of the sauce. Our locally grown chile powder is the essence of the snack," said the 11-year-old, named Mu Honglin.

She stopped speaking for a second, but then raised her voice to emphasize the words: "You know what? It was Chairman Mao's favorite dish in Zunyi."

Along the streets in the city center, some Long March-themed cosplay shops are popular with tourists. For less than 100 yuan, they can dress like soldiers from the Red Army from head to foot.

"It's very popular with tourists to wear Red Army uniforms, walk along the routes, follow in the soldier's footsteps and eat local food that was once appreciated by some great people in Chinese history. These experiences all help to bring history back to life," said Sun Hong, a tour guide.

According to statistics from the city's culture, sports and tourism bureau, Zunyi has seen 615 million visits in the past five years. "Red tourism" prompted 166 million of them and generated total revenue of more than 150 billion yuan.

The Long March National Cultural Park is still under construction, but He, from the leading group, said more immersive tourist options will be offered in the future.

They will include "red-themed" summer camps to encourage young people to experience the tough conditions during the march and study-oriented routes, through which participants will learn Party history with scholars.

"All those services will help pass on the spirit of the Red Army. Only by learning about the past, can we gain a deeper understanding of our achievement and get a clearer picture of the future," He said.

Zhao Yandi and Xu Tian'ge contributed to this story.