US women's team 'past the protesting phase' of anthem debate 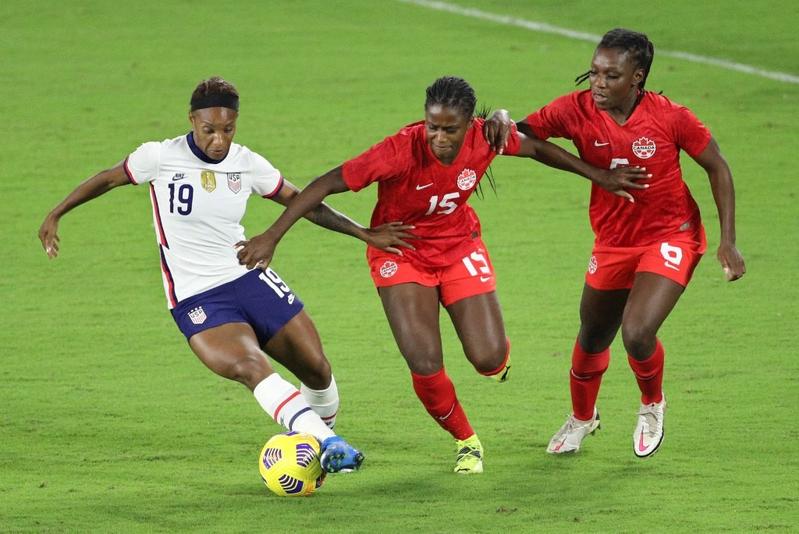 The US women’s national team said their decision to resume standing as a group for the national anthem rather then kneel in protest of racial inequality and police brutality is not the end of the squad’s fight for justice.

The entire US team, clad in their warmup jackets with the words “Black Lives Matter” on the front, stood for the national anthem ahead of their SheBelieves Cup game on Sunday after some had knelt in the tournament opener last Thursday.

US defender Crystal Dunn said no vote was taken to stop the kneeling gesture but rather it was a collective decision by a team ready to move past the protesting phase.

“I think those that were collectively kneeling felt like we were kneeling to bring about attention to police brutality and systemic racism,” said Dunn.

“We decided that moving forward we no longer feel the need to kneel because we are doing the work behind the scenes. We are combating systemic racism.

“We never felt we were going to kneel forever, so there was always going to be a time that we felt it was time to stand.”

The act of kneeling during the national anthem had all but disappeared from sport, but returned last year after George Floyd died in Minneapolis last May when a white police officer knelt on his neck for nearly nine minutes. His death sparked protests across the United States over police brutality.

Last June, US Soccer’s board of directors voted to repeal a policy that required players to stand for the national anthem, a rule put in place after Megan Rapinoe kneeled in support of Colin Kaepernick, who popularised the gesture while playing for the NFL’s San Francisco 49ers.

Dunn, who is one of seven Black or biracial players on the US team’s current 23-player roster, said she felt the squad are prepared to stand moving forward given their efforts off the field to combat systemic racism.

“Even though we are choosing to stand, it doesn’t mean that the conversations go away, or they stop,” said Dunn.

“It’s all to say that we are now, I think, ready to move past the protesting phase and actually move into putting all of the talk into actual work.”

The United States beat Canada and Brazil in their first two games of the SheBelieves Cup and finis the four-team round-robin tournament on Wednesday with a clash against winless Argentina.