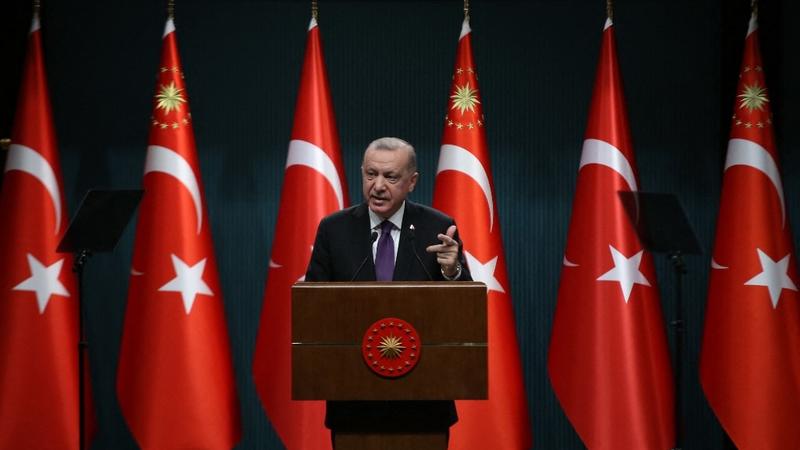 Turkish President Recep Tayyip Erdogan makes a speech as he holds a press conference following the cabinet meeting at the Presidential Complex in Ankara, on February 1, 2021. (ADEM ALTAN / AFP)

Ties between the two NATO allies have been strained over a host of issues. In December, the United States sanctioned Turkey for its purchase of Russian S-400 defense systems, while Ankara has been infuriated by US support for the Kurdish YPG militia in Syria, which it considers a terrorist organization.

Turkey has called on Washington to end its support for the Kurdish YPG militia in Syria and accused it of siding with militants who it says executed 13 Turks in northern Iraq this month, while the United States has criticized Ankara over rights and freedoms

Turkey, which has said it wants improved ties under US President Joe Biden, has called on Washington to end its support for the YPG and accused it of siding with militants who it says executed 13 Turks in northern Iraq this month, while the United States has criticised Ankara over rights and freedoms.

“As Turkey, we believe our common interests with the United States far outweigh our differences in opinion,” Erdogan said in televised comments, adding Ankara wanted to strengthen cooperation through “a long-term perspective on a win-win basis.”

“Turkey will continue to do its part in a manner worthy of the allied and strategic partnership ties between the two countries,” he said, adding Turkish-US ties had been “seriously tested” recently.

Turkish Foreign Minister Mevlut Cavusoglu and US Secretary of State Antony Blinken discussed the S-400 dispute and other disagreements during their first call.

Turkey has hired Washington-based law firm Arnold & Porter to lobby for its readmission into the F-35 jet programme, where it was a buyer and manufacturer, after it was removed by the United States over the S-400s. Washington’s claim that the defence systems poses a threat to the F-35s is rejected by Ankara.