Turkey says finds bodies of 13 killed by militants in Iraq 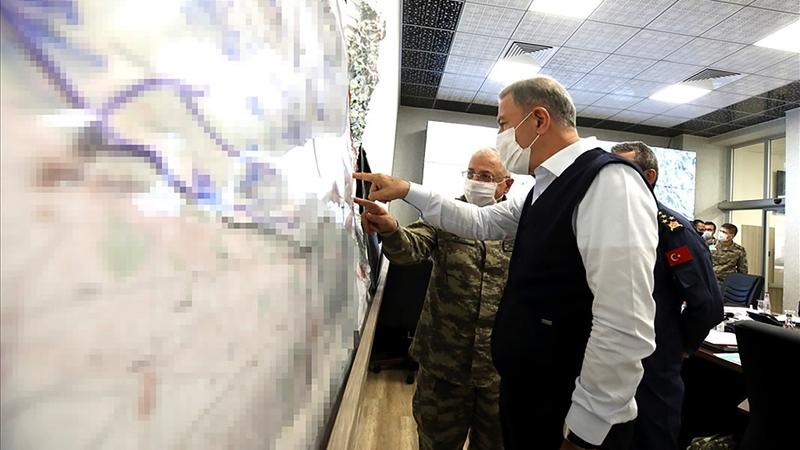 In this file photo made available by the Turkish Ministry of Defense Press Office on June 17, 2020, Turkish Minister of Defense Hulusi Akar looks at a map at the Army Command Control Center in Ankara during the military operation dubbed "Claw-Tiger",  an air and ground offensive against Kurdish rebels in northern Iraq. (HANDOUT / TURKISH DEFENCE MINISTRY / AFP)

The identity of the 13 Turkish citizens was unclear and the minister, Hulusi Akar, said their kidnapping had not previously been announced for security reasons.

Turkey launched a military operation against the PKK in northern Iraq’s Gara region on Feb 10 to secure its border and find citizens who had been kidnapped previously, Akar said in a statement released by his ministry on Sunday.

“According to initial information given by two terrorists captured alive, our citizens were martyred at the start of the operation by the terrorist responsible for the cave,” he said at the operation’s control centre near the Iraq border which he was visiting with military chiefs.

The PKK has not issued a statement on the incident.

The operation began with air strikes and a ground operation was then launched by soldiers who landed in the area by helicopter, the ministry said. Turkey has carried out similar operations in northern Iraq in the past.

The PKK, designated a terrorist group by Turkey, the United States and European Union, launched its armed insurgency in mainly Kurdish southeast Turkey in 1984 and more than 40,000 people have been killed in the conflict.

In the last couple of years Turkey’s fight against the PKK has increasingly been focused in the mountains of northern Iraq, where the group has its stronghold around the Qandil mountains, along the Iranian border.