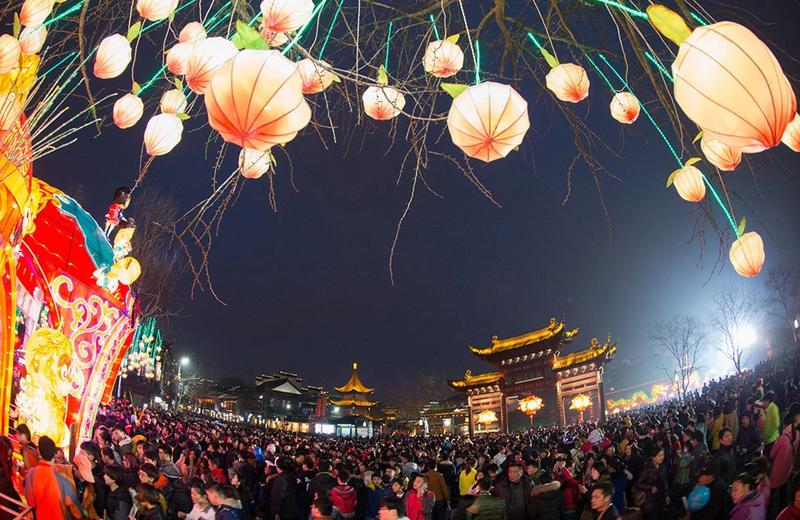 Lanterns in various shapes and sizes light up the skyline of Nanjing, Jiangsu province, during the Qinhuai Lantern Festival in February 2016. (PHOTO PROVIDED TO CHINA DAILY)

Some were shaped like fish, some like lotuses. All were for the Qinhuai Lantern Festival that began on Thursday.

The annual event in Jiangsu's provincial capital, also known as the Jinling Lantern Festival, was named as a form of national-level intangible cultural heritage in 2006.

It takes place during the Spring Festival holidays and usually lasts for about 50 days. The hosts claim it's the longest and largest of its kind in the country.

"It's one of the events I've gone to a lot over the years," Nanjing resident Wang Qianlin says.

"It's delightful to see so many shops and facilities of various kinds hanging up lanterns. I like how they put birdlike lanterns in the trees."

The event combines a lantern exhibition and a fair. Visitors can appreciate delicate lantern craftsmanship while shopping, sampling local delicacies and watching such folk performances as acrobatics shows.

The festival has drawn more than 120 million tourists over the past 31 sessions. Qinhuai's tourism income more than quintupled during the festivals between 2008 and 2017.

Lantern sales reached 10 million yuan (US$1.55 million) during the 2017 event, which has helped local lantern craftspeople showcase their skills while boosting their incomes. 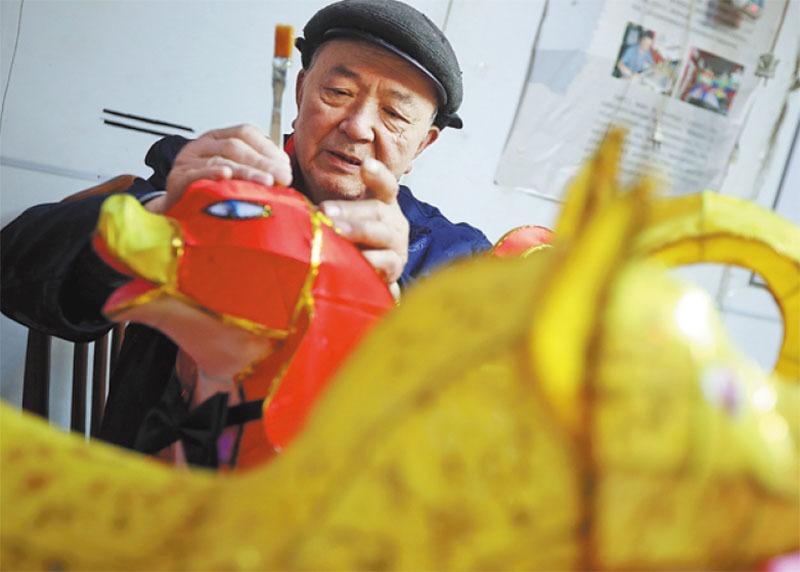 Cao Zhenrong has been busy making ox-themed lanterns for the upcoming Nanjing lantern festival. The 77-year-old has been making them since he was a child.

His lanterns have gained an increasingly prominent place at the festival over the years. Many visitors learn the basics of lantern-making at his workshop.

His daughter, Cao Hong, has taken up the baton and combines traditional lantern-making techniques with modern technology.

For instance, she sometimes creates the designs on computers, she explains.

Cao Hong says she is determined to carry on her father's practice and let more people appreciate its charm through events like the festival.

The festival was one of the 10 models for intangible cultural heritage and tourism integration selected by the Ministry of Culture and Tourism in 2019.

The festival has brought attention to local intangible culture, which helps protect artists by increasing their incomes and the appeal of scenic spots that host the events, experts say.

A dozen folk festivals have been staged in Beichuan Qiang autonomous county in Sichuan province to tap the local culture.

One such event is a ceremony for Da Yu, a legendary figure who is believed to be the founder of the Xia Dynasty (c.21st century-16th century BC) and was said to have tamed the flooding of the Yellow River. 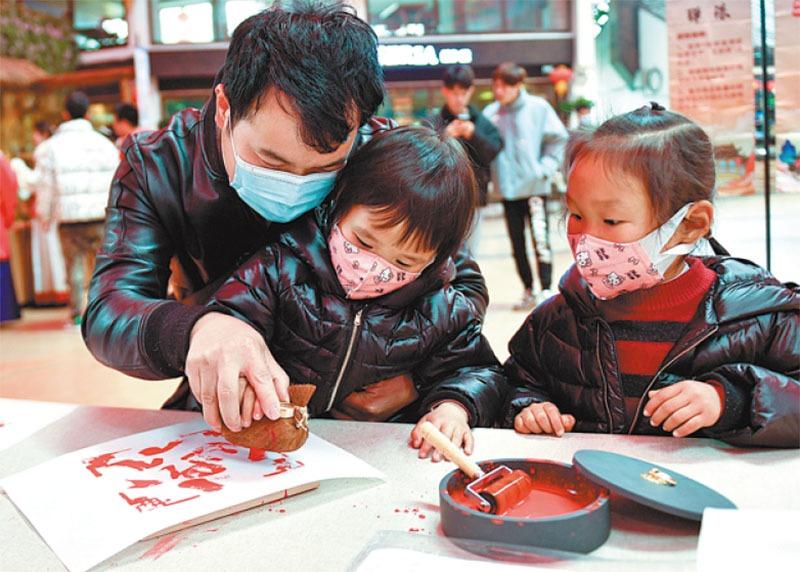 China has inscribed 55 sites on the UNESCO World Heritage list. And the State Council has named more than 1,300 national-level intangible cultural heritage items since 2006.

The State Council's notice for the 2016-20 tourism-development plan and the administration methods for national cultural and ecological reserves developed by the Ministry of Culture and Tourism in 2018 both emphasize intangible cultural heritage and tourism integration.

Income from cultural and creative products related to the Forbidden City in Beijing reached 1.5 billion yuan in 2017.

The virtual tours and digitalization have brought the splendid artistic and cultural legacy of Gansu province's Dunhuang, home to the UNESCO World Heritage site, the Mogao Grottoes, to a wider audience.

Dunhuang Academy and Huawei recently launched a virtual-tour experience of the site.

Visitors can enjoy an immersive fantasy before entering the attraction. They can see Dunhuang's murals from outside the caves using their Huawei smartphones. This reduces the time tourists spend inside the caverns, consequently protecting the relics while increasing the information available.

The Huawei platform fuses research, high-resolution images of the murals and three-dimensional virtual models with the physical Mogao grottoes. It not only re-creates actual tours of the scenic spot but also provides a new way to vividly experience the grottoes.

It can, for instance, more vibrantly present such elements as the nine-color deer portrayed in the frescos at close range, enhancing visitors' experiences of, and connection with, Dunhuang's art.

In Tongxiang in East China's Zhejiang province, visitors flock to workshops to learn how to make gusao cookies, a local specialty with more than 100 years of history. 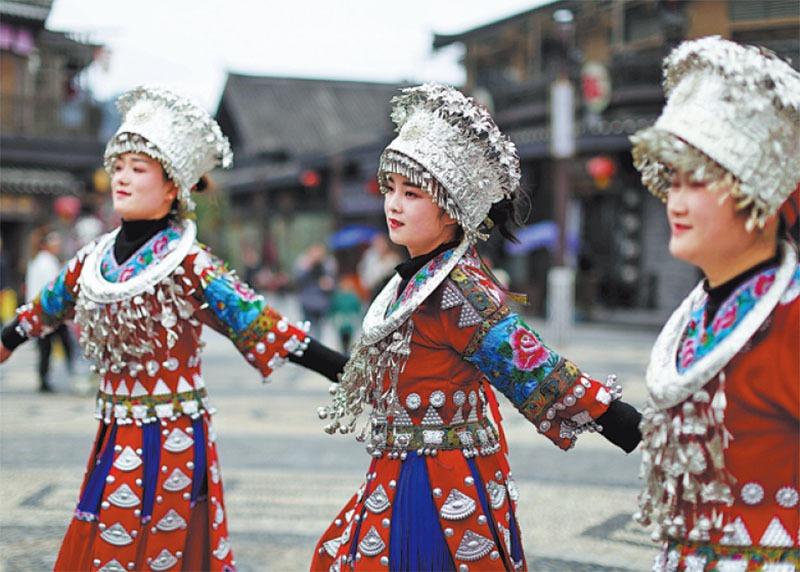 Zhejiang's Dongsha ancient fishing town has dug into its maritime culture to present a fishing festival. It also hosts a street that prominently displays local cultural items, such as fishbone paintings.

In East China's Fujian province, the Yongding Tulou－the multifamily communal living structures originally designed for defense purposes－have seen architecture museums and folk-art workshops spring up around them to enable travelers to better understand the culture of this unique architecture.

The local government has also arranged for national-level intangible cultural inheritors of tulou construction and wanying tea-making to offer training to the public.

The museum helps folk artists train apprentices and enables visitors to learn related skills for free. It raked in 20 million yuan in income in 2018 and boosted local cultural consumption by about 90 million yuan the same year.

Many traditional-attire specialists, painters and photographers have visited over the years.

In 2020, private bookings for tours related to intangible cultural heritage doubled over the previous year, the agency says.