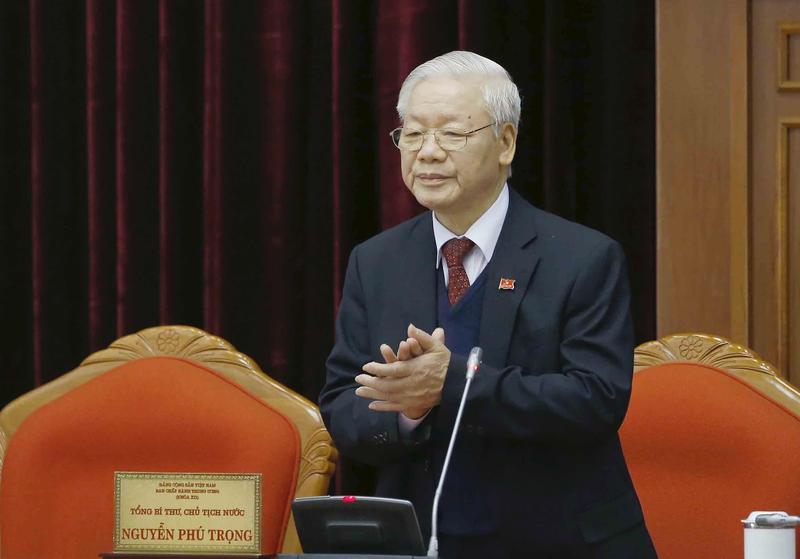 The election took place at the first meeting of the newly-elected 13th CPVCC on Sunday morning during the ongoing 13th CPV National Congress scheduled from Jan 25 to Feb1.

A total of 1,587 delegates representing over 5.1 million members of the CPV are attending the national congress held in the Vietnamese capital Hanoi

Also on Sunday, the secretariat and inspection commission of the CPVCC were elected. Tran Cam Tu was re-elected head of the CPVCC Inspection Commission, according to the news agency.

A total of 1,587 delegates representing over 5.1 million members of the CPV are attending the national congress held in the Vietnamese capital Hanoi.

Trong, born in 1944 in Hanoi, holds a doctorate degree. He studied at the Literature Faculty of Hanoi General University (now Hanoi National University) from 1963 to 1967 and joined the CPV in 1967.

Trong worked at the document department of the "Communist Review" magazine from December 1967 to July 1968. He was an editor of the magazine's Party building department between July 1968 and August 1973.

He pursued a master's degree in political economics at the Nguyen Ai Quoc High-ranking Party Institute from September 1973 to April 1976.

Trong worked again as an editor of the Party building department of "Communist Review" between May 1976 and August 1981, studied in the Soviet Union from September 1981 to July 1983 and gained an associate professorship there, and became vice head and then head of the magazine's Party building department between August 1983 and February 1989. Trong then worked as a member of the magazine's editing board between March 1989 and April 1990, and was deputy editor-in-chief from May 1990 to August 1991, before becoming the editor-in-chief.

He was elected to the CPVCC in January 1994, re-elected in June 1996, and became deputy secretary of the Hanoi Municipal Party Committee in October 1996 and a member of the CPVCC Politburo in December 1997.

Trong assumed secretary of the Hanoi Municipal Party Committee in January 2000 and chairman of the CPVCC Central Theoretical Council in 2001. He acted as Chairman of the National Assembly from 2006 to 2011.