China's institutions are working to address the issue of technological marginalization among the elderly, Xu Haoyu reports. 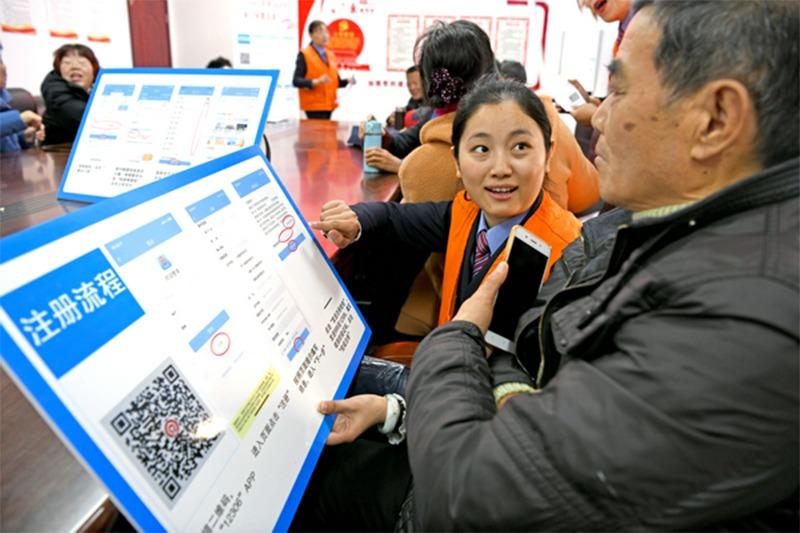 A volunteer with China Railway acquaints a senior citizen with procedures to buy railway tickets using a mobile app in Huainan, Anhui province, on Jan 14. (CHEN BIN / FOR CHINA DAILY)

The rapid development of internet and mobile technology has increasingly changed people's lives. For the majority, a smartphone brings convenience, but for many elderly people who don't master related skills, they are inevitably left behind.

The issue appears to have become particularly apparent during the fight against the COVID-19 pandemic.

People need to catch up with the digital revolution together, but at the same time, the pace at which that is done should differentiate, taking into account the age structure

On Jan 6, an elderly man who could not show his health code－a smartphone app that tracks people's movements to show their risk levels to COVID-19 infection－was not allowed to board a bus in Fushun city, Northeast China's Liaoning province. The topic triggered a heated public discussion on social media.

According to a report launched by the China Internet Network Information Center in June, more than 90 million internet users, or 10.3 percent of the national total, were aged 60 or above. However, the total population aged 60 or above in China is 253.88 million, according to the National Bureau of Statistics.

According to a recent report in The Beijing News, at least 157 million Chinese people aged 60 or above have never had access to the internet.

The internet has become an indispensable tool in contemporary society. Every single individual has the right to use it, but not everyone knows how to. It was not until the outbreak of the pandemic that people realized just how marginalized seniors had become because of new technology.

Xu Yinzhen, 78, lives on a different floor, but in the same building, as two of her daughters in Jiaxing, Zhejiang province. She describes her life as "easy and satisfying".

In 2014, Xu received a secondhand iPhone from her grandson. Living in an era when landline phones descending into obsolescence, her two daughters helped her catch up with the mobile trend and got her used to contacting people with her smartphone.

A staff member helps senior citizens without health codes on their mobile phones to get to their train through a "green passage" at the railway station in Wuxi, Jiangsu province, in October. (CHEN DONGXIA / FOR CHINA DAILY)

After the pandemic, Xu soon came to understand the importance of the health QR code system and how much it relates to her everyday life. "It is a pass that allows me to enter the market, so I can buy meat and vegetables and cook a nice meal for us all to enjoy," she says.

Yuan Fubao, an old friend of Xu, however, is living in a very different world.

On Jan 14, Xu visited 86-year-old Yuan, who lives alone in a nearby village called Zhonglian.

According to Xu, Yuan's children, in search of a higher income, are working away in a bigger city. Every day, Yuan cooks herself congee for breakfast and dinner, and the countryside commission would charge her three yuan ($0.46) to have a lunchtime meal delivered to her door.

Xu found that, as there are only about three households left in the village, and Yuan has no smartphone or health code, she has nowhere to go and nobody to talk with. Sunbathing is Yuan's only way to relax and kill time.

In a relieved tone, Xu reveals that Yuan's children will collect their mother and take her to the city to celebrate Chinese New Year together, and the countryside commission will issue a certificate to act as Yuan's pass.

"The elderly can be really lonely and lost without families around," Xu says. "It's heartbreaking to just imagine Yuan's daily life. She's experiencing social isolation in the digital world, especially during the pandemic."

To allow seniors to continue enjoying life throughout this challenging period, government departments have introduced policies that bring back a world when the internet and smartphones were not a necessity.

The State Council, China's Cabinet, recently issued a plan aimed at helping the elderly to better cope with the difficulties caused by the utilization of smart technologies. That was followed by the Ministry of Culture and Tourism and the National Cultural Heritage Administration's decision to help remove technological barriers to entry for the elderly in their relevant sectors.

The National Library of China, for instance, has established a "green passage" for the elderly readers, providing dedicated staff members to help them navigate the procedures of the smart system, enabling them to get access to the books in an easier way. 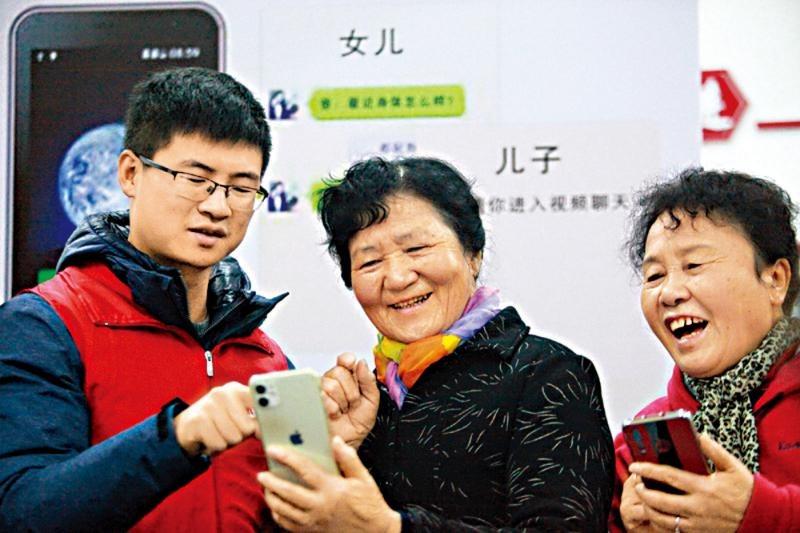 A volunteer instructs senior citizens how to use their mobile apps in Yangzhou, Jiangsu province, in November. (MENG DELONG / FOR CHINA DAILY)

The library also offers help for the older generation to get access to a health code. Those who don't have smart devices can still enter the library with a personal ID after completing a registration procedure with the help of the staff.

"They provide us with comprehensive services, and they can teach us how to use these smart devices. We can enter the national library without any trouble," explains 78-year-old reader Liu Lidao.

To meet seniors' demand to master new technology, in 2014, the library established courses. The eight series of courses explain the functions of mobile phones, how to use the common applications, teach them about video production, online medical care, smart scanning and identification and, of course, online shopping. By the end of 2020, the library had received over 100 pennants and letters of thanks.

This month, the Ministry of Industry and Information Technology started a special yearlong, countrywide project that aims to make elderly-user-friendly and barrier-free improvements to internet applications.

As its first move, the ministry will complete the upgrading of 115 public service websites and 43 mobile apps, covering areas such as relevant national ministries and provincial governments, transportation, financial services, and social communications. Functions including larger fonts and icons, higher contrast text display, as well as a clear, simple and easy-to-operate interfaces, will be introduced. Plus, many applications will add dialect recognition and other auxiliary functions.

"After the pandemic outbreak, people have been using the internet and smartphones more frequently, which has affected the quality of life for the elderly. As a result, the proportion of online users aged 60 and above in China has greatly increased," says Yuan Xin, a professor at Nankai University, in an interview with a Chinese new media platform called Jiemian.

"People need to catch up with the digital revolution together, but at the same time, the pace at which that is done should differentiate, taking into account the age structure of the entire population, the digitization acceptance of different groups of people, and their ability to use digital devices."