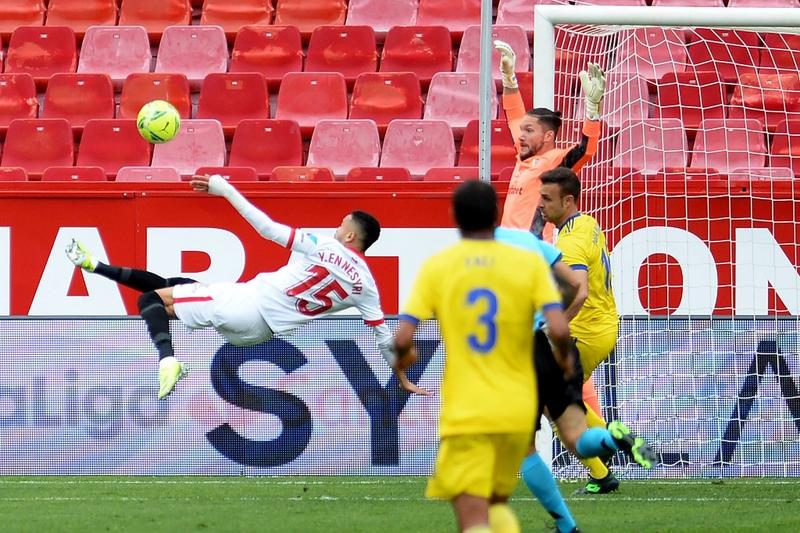 Sevilla striker Youssef En-Nesyri scored a second hat-trick in four matches as his side demolished Cadiz 3-0 on Saturday to climb into third place in La Liga.

Elsewhere, 39-year-old Joaquin inspired Real Betis to claw their way back from two goals down to Real Sociedad and draw 2-2 by scoring and providing an assist in the final few minutes. Villarreal drew 0-0 at struggling Huesca. Moroccan forward En-Nesyri tapped a loose ball into the net in the 35th minute on the rebound after team mate Suso had struck the post. Moments later he headed home a free kick from Suso to double his side’s advantage.

The striker showed his relentless hunger for goals to complete his treble in the second half, reacting quickly to a terrible clearance from Cadiz’s Marc Baro and climbing above another defender to head home.

En-Nesyri then had a fourth strike ruled out for a narrow offside but his haul took him to the top of La Liga’s scoring charts with 12 goals, inching ahead of Atletico Madrid’s Luis Suarez and Barcelona’s Lionel Messi on 11 each.

The forward said he had scored his second goal despite being partially sighted following a clash with a Cadiz player.

“I had a problem with my eye and couldn’t see but I knew I could do something at the next play and so I had to score with one eye,” En-Nesyri told reporters.

“I’m very happy with the hat-trick and for how hard the rest of the team worked. We’re going to keep on playing like this, scoring goals and getting lots of points. We’re not going to let up.”

Sevilla are third on 36 points from 19 games, two points ahead of Barcelona, who visit Elche on Sunday, and Villarreal.

Cadiz were left in ninth place on 24 points.

Sociedad are sixth on 31 points after throwing away the lead against Betis.

Alexander Isak and Mikel Oyarzabal scored early in the second half to give the Basques a healthy advantage and they missed further chances to add to their lead before Joaquin teed up Sergio Canales in the 86th minute.

The veteran Betis captain then snatched a point for his side in added time, pouncing on a loose ball in the area while a deflection took his shot beyond Alex Remiro and into the net.