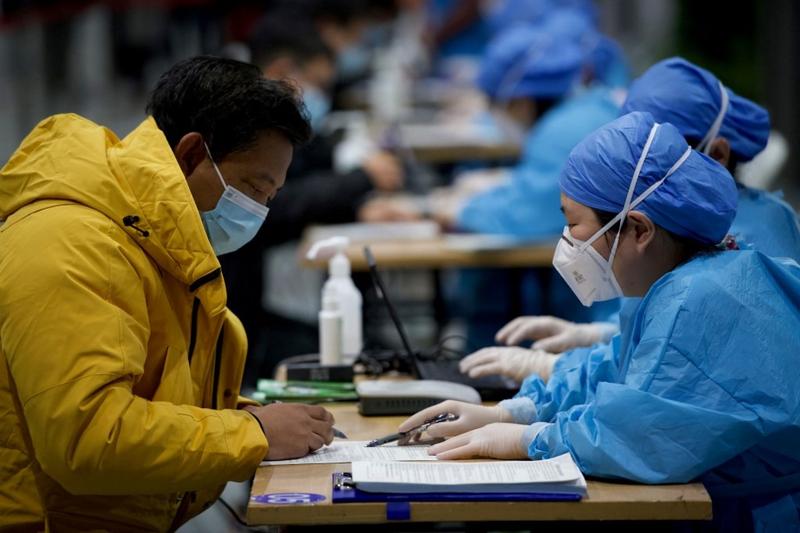 Medical workers register people to be inoculated with a COVID-19 vaccine at the Chaoyang Museum of Urban Planning in Beijing on January 15, 2021. (NOEL CELIS / AFP)

Of the locally transmitted cases, 72 were reported in Hebei, 12 in Heilongjiang, 10 in Jilin, and two in Beijing, the commission said in its daily report.

Of the locally transmitted cases, 72 were reported in Hebei, 12 in Heilongjiang, 10 in Jilin, and two in Beijing, the National Health Commission said in its daily report

A new suspected case arriving in Shanghai from outside the mainland was reported Saturday, said the commission.

The total number of confirmed COVID-19 cases on the mainland reached 88,227 by Saturday, including 1,205 patients still receiving treatment, 42 of whom were in severe condition.

A total of 82,387 patients had been discharged from hospitals following recovery on the mainland, and 4,635 had died of the disease, according to the commission.

Two suspected COVID-19 cases have remained on the mainland as of Saturday, and 34,150 close contacts remained under medical observation.

A total of 746 asymptomatic cases were under medical observation, of which 261 arrived from outside the mainland.

By the end of Saturday, 9,502 confirmed COVID-19 cases, including 162 deaths, had been reported in the Hong Kong Special Administrative Region (SAR), 46 cases in the Macao SAR, and 850 cases, including seven deaths, in Taiwan.

A total of 8,724 COVID-19 patients in the Hong Kong SAR had been discharged from hospitals following recovery, 46 in the Macao SAR, and 751 in Taiwan.

READ MORE: WHO working with Sinopharm, Sinovac ahead of emergency use