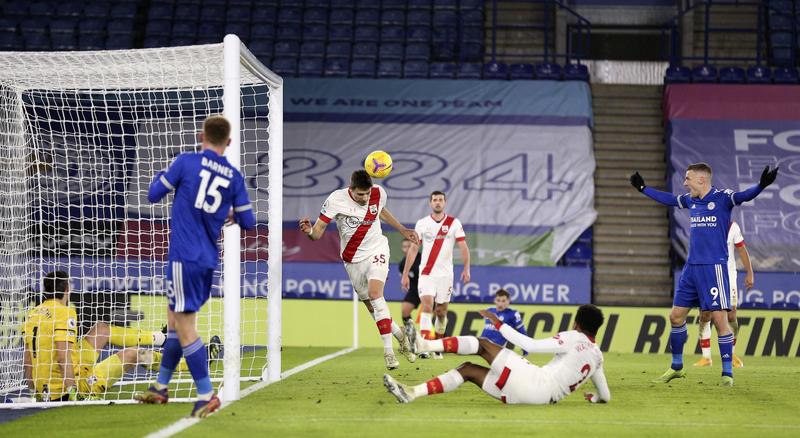 Southampton's Jan Bednarek, center, clears off the line an attempt by Leicester's Harvey Barnes during the English Premier League soccer match between Leicester City and Southampton at the King Power Stadium in Leicester, England, Jan 16, 2021. (ALEX PANTLING / POOL VIA AP)

LONDON - Leicester City maintained their impressive form as a 2-0 home win against Southampton extended their unbeaten Premier League run to five games to lift them into second place on Saturday.

Chelsea had won only one of their previous six league games, slipping way off the pace, and they laboured against a tiring Fulham side who were reduced to 10 men

Goals from James Maddison and Harvey Barnes saw off the Saints as Leicester moved above champions Liverpool who host leaders Manchester United in Sunday’s big showdown.

Earlier in the day there was a first win for new West Bromwich Albion manager Sam Allardyce as his side beat faltering Wolverhampton Wanderers 3-2 at Molineux.

There was also an important win for Chelsea who got back on track after a dreadful run of form with a 1-0 victory at Fulham.

Leicester’s away form has far outshone their home form this season and a Southampton side who beat Liverpool last time out looked capable of causing problems.

But Maddison’s scorching angled drive after 37 minutes gave them the lead before Barnes raced clear in stoppage time to seal only a fourth home league win of the campaign for Leicester.

Brendan Rodgers’s side have 35 points from 18 games, one point behind United and two better off than Liverpool. Manchester City, who also slipped below Leicester ahead of their Sunday clash with Crystal Palace, have 32. 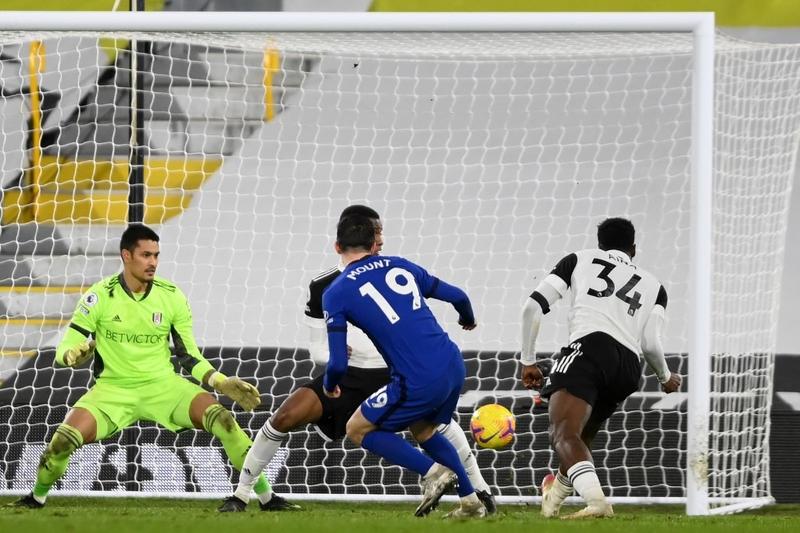 A day after Premier League chief Richard Masters called on players to set the right example by not celebrating goals with the usual hugs, both Leicester’s scorers adhered to the rules, as did West Ham United’s match-winner Michail Antonio who adopted a bizarre routine that looked like he was swimming backstroke across the London Stadium turf.

“I said to them there is lots of negativity around it but see it as a positive and be creative,” Leicester manager Rodgers said of Maddison’s imaginary handshake routine.

“Supporters still want to see players celebrate, the happiness, so be creative with it.”

Chelsea had won only one of their previous six league games, slipping way off the pace, and they laboured against a tiring Fulham side who were reduced to 10 men when Antonee Robinson was sent off in the 44th minute for a foul on Cesar Azpilicueta.

But just when it looked as though Fulham might hold out for a sixth successive Premier League draw, Mason Mount rifled in a 78th minute winner after a mistake by keeper Alphonse Areola.

“It was a small step today in terms of getting us a little bit back on track in the league, but it only counts if we take it forward over this month because we have got some big games coming up,” Lampard, whose side rose to seventh, said.

Fulham’s defeat left them third from bottom and it as an especially costly day with 19th-placed West Brom picking up only their second win of the season and 16th-placed Brighton and Hove Albion ending a nine-match winless streak with a notable 1-0 win away to Leeds United thanks to Neal Maupay’s first-half goal.

Matheus Pereira gave West Brom the lead from the penalty spot but Wolves replied through Fabio Silva and Willy Boly.

West Brom turned things around though with two quick-fire goals after the restart, Semi Ajayi looping in a header before Pereira scored his second penalty of the day after Conor Coady had fouled Callum Robinson.

“A win was very important at this moment in time. The attitude, work-rate and determination of the players, that’s brought us a big, big victory,” Allardyce said.