Impeachment: Can Trump be barred from future office? 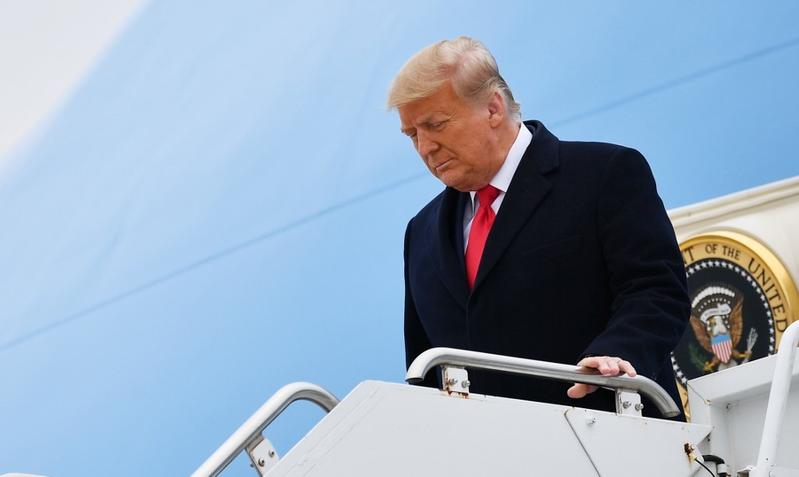 US President Donald Trump stepping off Air Force One upon arrival in Harlingen, Texas, on Jan 12, 2021. (MANDEL NGAN / AFP)

Some US lawmakers have said President Donald Trump should be disqualified from holding political office again following his impeachment on Wednesday for inciting a mob that stormed the Capitol as lawmakers were certifying President-elect Joe Biden’s victory.

The US Constitution says there are two ways to punish an impeached official: Removal from office or “disqualification to hold and enjoy any office of honor, trust or profit under the US”

Now that the House has impeached Trump, the Senate will hold a trial on whether to remove him and possibly bar him from future office.

Legal experts said disqualification could be accomplished through the impeachment proceedings or the 14th Amendment of the US Constitution.

Here is how the disqualification effort could play out.

Can Trump’s disqualification be accomplished through impeachment?

The US Constitution says there are two ways to punish an impeached official: Removal from office or “disqualification to hold and enjoy any office of honor, trust or profit under the United States.”

The House approved a single article of impeachment accusing Trump of inciting insurrection when he delivered an incendiary speech to supporters shortly before the pro-Trump mob rampaged the Capitol.

Trump is likely to argue at trial that his remarks were free speech protected by the Constitution’s First Amendment and that, while he told supporters to “fight,” he did not intend it as a literal call to violence.

Removing an official requires a “conviction” by a two-thirds Senate majority under the Constitution. Under precedent, only a simple majority is needed for disqualification. Historically, that vote only happens after a conviction.

Three federal officials in US history have been disqualified through impeachment proceedings. All three were federal judges.

Most recently, in 2010 the Senate removed and disqualified from future office a Louisiana judge found to have engaged in corruption.

There is some debate over the scope of the disqualification clause and whether it applies to the presidency, said Brian Kalt, a law professor at Michigan State University.

Analyzing historical documents, some law experts say the founders did not intend the presidency to be considered an “office” under the disqualification clause, while others argue that the term applies.

Can Trump be disqualified if he is not convicted by the senate?

This is uncharted legal territory, and there is no clear answer, scholars said.

Paul Campos, a professor of constitutional law at the University of Colorado, said he believed a vote to disqualify Trump can be held even if there are not enough votes for conviction. The US Supreme Court has made clear that the Senate has wide latitude to determine how it conducts a trial, he said.

But Kalt said he thought disqualification would require conviction first. To do otherwise would be the equivalent of punishing the president for an offense he did not commit, Kalt said.

All three judges who were disqualified from office were first convicted. 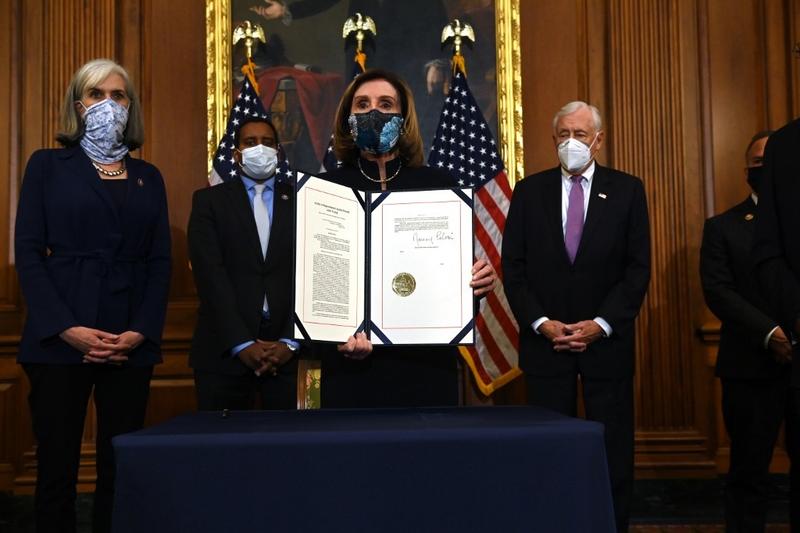 Majority Leader Steny Hoyer (D-MD) (right) and Assistant Speaker Katherine Clark (D-MA) (left), alongside House Impeachment Manager Representative Joe Neguse (D-CO), look on as Speaker of the House Nancy Pelosi (D-CA) holds the signed article of impeachment during an engrossment ceremony after the US House of Representatives voted to impeach the US President Donald Trump at the US Capitol, January 13, 2021, in Washington, DC.(Brendan SMIALOWSKI / AFP)

What about the 14th Amendment?

Section 3 of the 14th Amendment provides an alternative path for disqualification.

The provision states that no person shall hold office if they have engaged in “insurrection or rebellion” against the United States. It was enacted following the Civil War to bar Confederates from holding public office.

Under congressional precedent, only a simple majority of both chambers is needed to invoke this penalty. Congress can later remove the disqualification, but only if two-thirds of both houses vote in favor of doing so.

In 1919, Congress used the 14th Amendment to block an elected official, Victor Berger, from assuming his seat in the House because he had actively opposed US intervention in World War I

In 1919, Congress used the 14th Amendment to block an elected official, Victor Berger, from assuming his seat in the House because he had actively opposed US intervention in World War I.

The text of Section 3 of the 14th Amendment does not explain how it should be invoked.

Another section the 14th Amendment, Section 5, empowers Congress to enforce the entire amendment through “appropriate legislation.” Some scholars have interpreted this language to mean that a majority of both chambers of Congress could enact a law applying a ban to a particular president, like Trump.

“The 14th Amendment route is very unclear as to what it would take to get it rolling,” said Kalt. “I think it would require some combination of legislation and litigation.”

Could Trump challenge a disqualification in court?

It is certainly possible, said Kalt.

A Supreme Court case from 1993 makes clear that the court is wary of second-guessing how the Senate handles impeachment. In that case, involving an accused judge, the court said whether the Senate had properly tried an impeachment was a political question and could not be litigated.

If Trump is disqualified, the current Supreme Court might want to clarify whether the move was lawful, Kalt said.

“If you are going to say someone can’t run, you want to get that litigated and settled sooner rather than later,” Kalt said.