By Julian Shea in London 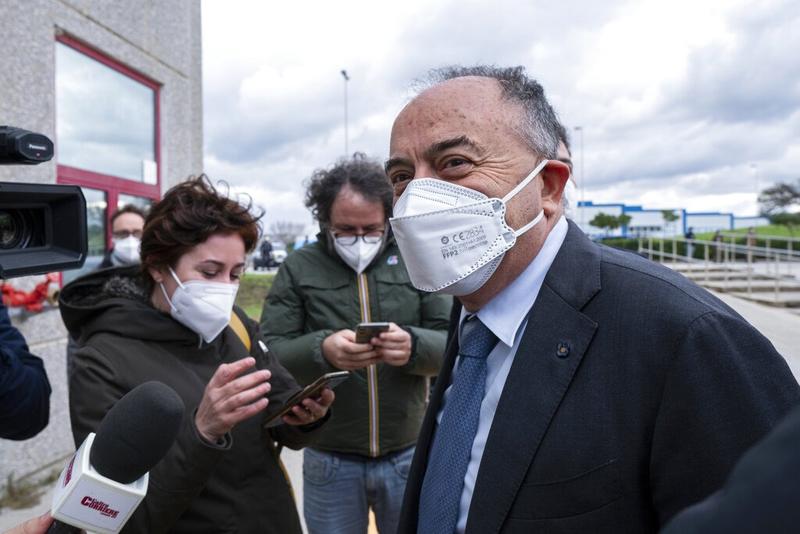 Anti-mafia Prosecutor Nicola Gratteri arrives at a specially constructed bunker for the first hearing of a maxi-trial against more than 300 defendants of the ‘Ndrangheta crime syndicate, near the Calabrian town of Lamezia Terme, southern Italy, Jan 13, 2021. (VALERIA FERRARO / LAPRESSE VIA AP)

What has been billed as Italy's biggest organized crime trial in three decades began on Wednesday with more than 350 people, including public officials and politicians, facing charges of being part of the 'Ndrangheta crime syndicate.

The trial, which will see 900 witnesses give evidence, is taking place in the city of Lamezia Terme in the region of Calabria, in the far Southwest of the country.

A special 1,000-capacity courtroom with cages for the defendants has been constructed, but novel coronavirus restrictions mean many of the preliminary hearings will be conducted via videolink, and those who do attend in person will have to obey social distancing rules.

Prosecutor Nicola Gratteri said that the 'Ndrangheta crime syndicate generates more than 50 billion euros (US$61 billion) per year, controlling the import of most of Europe's cocaine, but also being involved in white-collar crime such as money laundering

Prosecutor Nicola Gratteri told Agence France-Presse that the trial "is a cornerstone in the building of a wall against the mafias in Italy".

It is estimated that there are around 150 'Ndrangheta families in the Calabria region, with at least 6,000 members locally, and innumerable others elsewhere.

Gratteri also said the group generates more than 50 billion euros (US$61 billion) per year, controlling the import of most of Europe's cocaine, but also being involved in white-collar crime such as money laundering.

"The real strength of these mafia families is they have control of the territory and within the territory they do everything," Oxford University criminologist Federico Varese told the AFP.

"If you want to open a shop, if you want to build anything, you have to go through them ... they are the authority."

The majority of the defendants were arrested in December 2019 after a three-year investigation across 11 regions of Italy, with an elite police unit called the Cacciatori, which translates as hunters, arresting suspects, some of whom had resorted to hiding in bunkers behind staircases and down manholes.

Arrests were carried out in Germany, Bulgaria and Switzerland, and included local councilors, a police chief and a former senator.

When the raids took place, Gratteri told The Guardian newspaper that it was the biggest operation against organized crime since the Palermo trials in Sicily between 1986 and 1992, which saw 475 people in the dock.

That trial also resulted in judges Giovanni Falcone and Paolo Borsellino murdered, and Gratteri's high-profile position means that he and his family have had to live under police protection for many years, but he said it was a price worth paying.

"Any sacrifice, any risk, is overcome in the conviction of being right and useful to the freedom of the people," he told Sky News.

"I spent my childhood in Calabria, at a time when dozens and dozens of people were killed.

"When I used to go to school from my village, several times I used to see dead people on the ground and I thought that as an adult I wanted to do something to prevent this from happening."