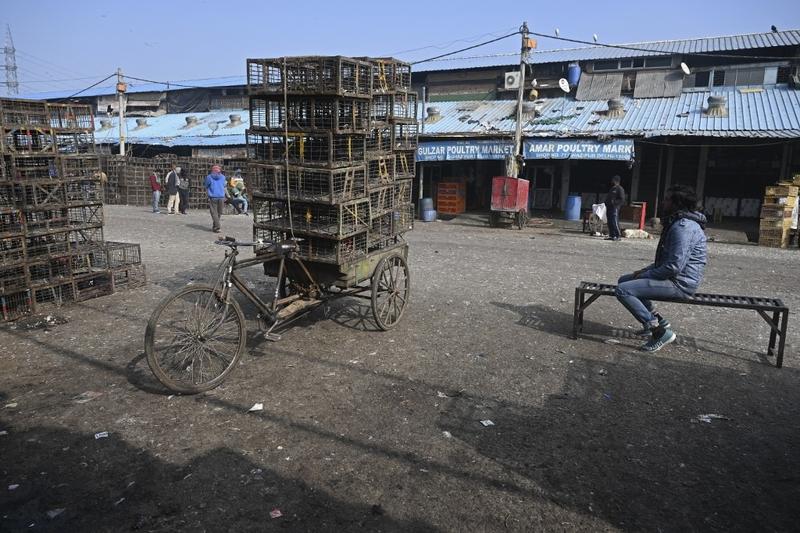 Workers are seen at the Ghazipur wholesale poultry market after it was closed for 10 days as a preventive measure against the spread of bird flu in New Delhi, India, on Jan 10, 2021. (SAJJAD HUSSAIN / AFP)

MUMBAI/TOKYO - Asia’s chicken farmers are confronting the region’s worst bird flu outbreak in years, with the deadly virus affecting farms stretching from Japan to India, roiling some poultry prices and showing no signs of easing.

More than 20 million chickens have been killed in South Korea and Japan since November. The highly pathogenic H5N8 virus last week reached India, the world’s No. 6 producer, and has already been reported in 10 states.

While bird flu is common in Asia at this time of year due to migratory bird patterns, new strains of the virus have evolved to become more lethal in wild birds, making countries on flight pathways particularly vulnerable, say experts.

“This is one of the worst outbreaks ever in India,” said Mohinder Oberoi, an Indian animal health expert and former advisor to the UN’s Food and Agriculture Organization (FAO).

The Asian outbreak comes as Europe suffers its worst bird flu outbreak in years, and follows on the heels of COVID-19, which hurt poultry sales early on in some places amid false disease concerns but is now driving up demand due to more home cooking.

Chicken prices in India fell almost a third last week as wary consumers, increasingly nervous about disease since the pandemic, steered clear of the meat.

Bird flu cannot infect people through poultry consumption, and the H5N8 virus is not known to have ever infected humans, but consumers are still fearful, said Uddhav Ahire, chairman of Anand Agro Group, a poultry company based in the western city of Nashik.

Live chicken prices are already as low as 58 Indian rupees (US$0.79) a kilogram, below the cost of production, he said.

In South Korea and Japan, no market impact has been seen yet, officials said, with stronger demand for chicken meat for home cooked meals during lockdowns having a greater effect on prices.

The rapid and wide geographic spread of the latest outbreaks make this one of the worst waves in Asia since the early 2000s.

In Japan, where outbreaks have been reported from Chiba near Tokyo to more than 1,000 kilometers away in Miyazaki on Kyushu island in just two months, fresh cases are still occurring.

Bird flu cannot infect people through poultry consumption, and the H5N8 virus is not known to have ever infected humans, but consumers are still fearful, said Uddhav Ahire, chairman of Anand Agro Group

“We can’t say risk of the further spread of bird flu has diminished as the migration season for wild birds will continue till March, or even April in some cases,” said an animal health official in the agriculture ministry.

The H5N8 viruses detected in Japan and South Korea are very similar to those that spread through Europe in 2019, which in turn evolved from viruses that were prevalent in 2014, said Filip Claes, head of the FAO’s Emergency Centre for Transboundary Animal Diseases (ECTAD).

A different variant circulating in Europe since late 2020 is also causing significant damage.

“It’s quite clear that this virus has established itself in the wild bird population and so now there’s a greater propensity for it to spill over back into poultry farms,” she said.

A compulsory flu vaccination for poultry in China has protected the region’s top producer, even though the virus has killed wild swans there.

Indonesia, Asia’s No.2 producer, is only a temporary transit point for wild birds, reducing its risk of infection, said Fadjar Sumping Tjatur Rassa, director of animal health at the Agriculture Ministry.

Still, the country has banned live bird imports from countries with H5N8 and set up a surveillance system for early detection of the virus, he said.

With no major bird flight pathways over Southeast Asia, countries like Vietnam, Laos and Cambodia have so far been spared H5N8 outbreaks, but face risks from the movement of people and goods.

“It will keep spreading until another virus comes along to replace it,” said Shelton.