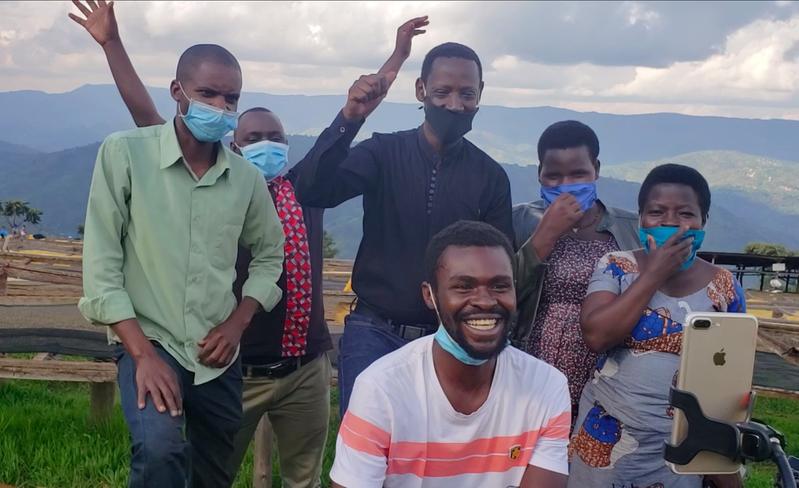 Rwandan coffee farmers watch livestreaming videos on Taobao and cheer when they see 1500 kg of coffee is sold out instantly, on May 14, 2020. (NIU JING / FOR CHINA DAILY)

Entities from Europe are joining their peers in Africa to promote the development of the farm sector on the continent, especially in the Sahel region.

The entities have signed on to a charter committing themselves to action on the issue. Those involved say Africa's agricultural sector represents an exceptional lever of growth and point to its resilience in the face of the coronavirus pandemic.

Unlike other industries that were hit hard by the pandemic, the farm sector was not unduly affected by the movement restrictions brought in to counter the coronavirus' spread. The high demand for food products in cities has been a powerful force behind the increase, those involved in the initiative say.

The International Agro-ecological Movement for Africa was launched on the sidelines of the One Planet Summit 2021, which was held virtually on Monday. Its backers say agriculture should be one of the main levers of development on the continent.

Toward that end, they said modernization of the sector, particularly through agro-ecology, digital agriculture, and so-called social business must become a priority.

The signatories to the charter intend to jointly develop value chains that meet the needs of Africans.

Among the key activities will be the promotion of technology transfers and the appropriation of the know-how required for the sustainable development of the agricultural and livestock sectors envisaged by the International Agro-ecological Movement for Africa.

The multilateral initiative was formalized with the attendance of French President Emmanuel Macron, Mauritanian President Mohamed Ould Ghazouani and Britain's Prince of Wales, among others.

The objective ... is to participate in the promotion of a strategy combining social, environmental and economic development in the service of prosperity but also the preservation of biodiversity and more generally the stability of the continent.

"The objective of the signatories, through their commitment to deploying this approach in most of Africa, is to participate in the promotion of a strategy combining social, environmental and economic development in the service of prosperity but also the preservation of biodiversity and more generally the stability of the continent," Karim Ait Talb, co-founder of the initiative, said.

Talb said the structuring of agro-livestock value chains that encourage ecological practices and the creation of sustainable jobs will be an important response to the needs of the Sahel region, which is highly exposed to the effects of climate change.

At the online event, the African Development Bank pledged US$6.5 billion in support of a Great Green Wall Initiative, under which trees and other vegetation types will be planted across the Sahara and Sahel regions.

"The Great Green Wall is part of Africa's environmental defense system－a shield against the onslaughts of desertification and degradation," Akinwumi Adesina, the bank's president, said.

The European Investment Bank and the Agence Française de Developpement pledged US$1.2 billion and US$729.6 million, respectively, for efforts to back sustainable agriculture and other needs in 11 Sahel countries.

Lack of finance has been the project's major constraint to realizing its goal of creating 10 million jobs, sequestering 250 million tons of carbon and restoring 100 million hectares of degraded land in the Sahel-Sahara region.