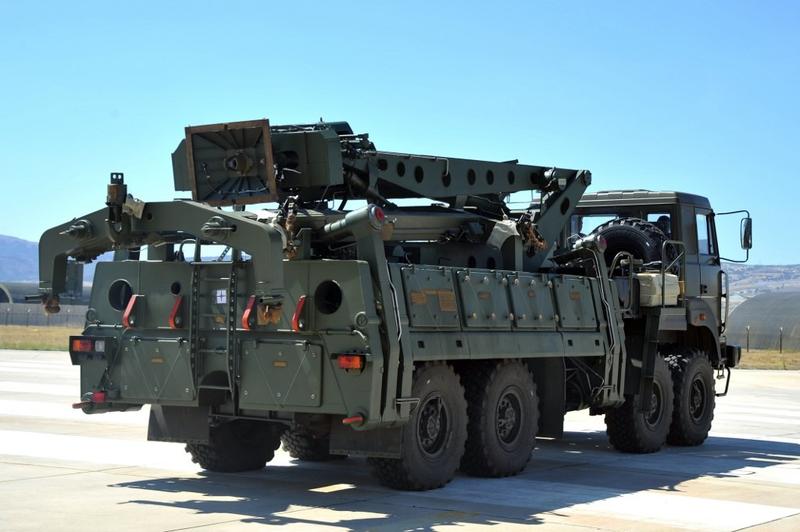 This handout picture taken and released on Aug 27, 2019 by the Turkish Defense Ministry shows a part of the S-400 missile defense system after is was unloaded from a Russian cargo plane, at the Murted military airbase, northwest of Ankara. (TURKISH DEFENCE MINISTRY / AFP)

A senior Turkish official said on Monday that the Russian S-400 missile defense systems are ready to be commissioned in Turkey despite strenuous opposition by the United States.

"The S-400s are ready for use, and the armed forces will decide when such a need arises," the Turkish TV channel 24TV quoted Ismail Demir, president of the Turkish Presidency of Defense Industries, as saying

"The S-400s are ready for use, and the armed forces will decide when such a need arises," the Turkish TV channel 24TV quoted Ismail Demir, president of the Turkish Presidency of Defense Industries, as saying.

Demir said Turkish enterprises were continuing to work on the project of developing US F-35 fighters, despite Washington's decision to exclude Turkey from this program.

"This is what would have happened if we had chosen a quick and easy path, but we aim for the maximum. With the information that we get from working with S-400, we plan to reach the S-400 level in our work on creating our own missile defense systems by 2025-26," he said.

Turkey was the first NATO member state to purchase the missiles from Russia based on a deal with Moscow reached in 2017.

Turkey's decision caused a sharply negative reaction from the US.

The US said the mobile surface-to-air missiles pose a risk to the NATO alliance as well as the F-35, one of the country's most expensive weapon platforms.

Despite Western warnings, Turkey received the first of four missile batteries in July 2019. The administration of US President Donald Trump slapped sanctions on Turkey in December, including an asset freeze and visa restrictions on Demir and other top Turkish officers.

Experts said the timing of the US sanctions and the consistent pressure could have the potential to mar relations between Ankara and Washington for an incoming Joe Biden administration.

Although US officials downplayed the timing, saying the process of implementing sanctions was "very serious" and "deliberative", Thomas Karako, director of the Missile Defense Project at the Center for Strategic and International Studies, said "strong, well-tailored sanctions are painfully overdue".

Still, in any case, Turkey does not intend to leave NATO, since this is not in its interest, Turkish political analyst Serkan Demirtas told Russian newspaper Izvestia.

Ankara has no alternatives to NATO, and the Turkish economy has close ties to the West, he said. The alliance does not want to ruin relations with Turkey completely either. The political commentator added the Biden presidency promises a more stable trans-Atlantic partnership.

"However, at the same time, the increasing independence of Ankara does not mean that it will have a more positive policy on Russia. Moreover, it can act more aggressively due to a lack of resources to carry out an offensive-dominated foreign policy," he said.