By Zou Shuo and Li Yingqing

Concerns about obesity and myopia prompt second thoughts about the importance of sports. Zou Shuo reports from Beijing with Li Yingqing in Kunming. 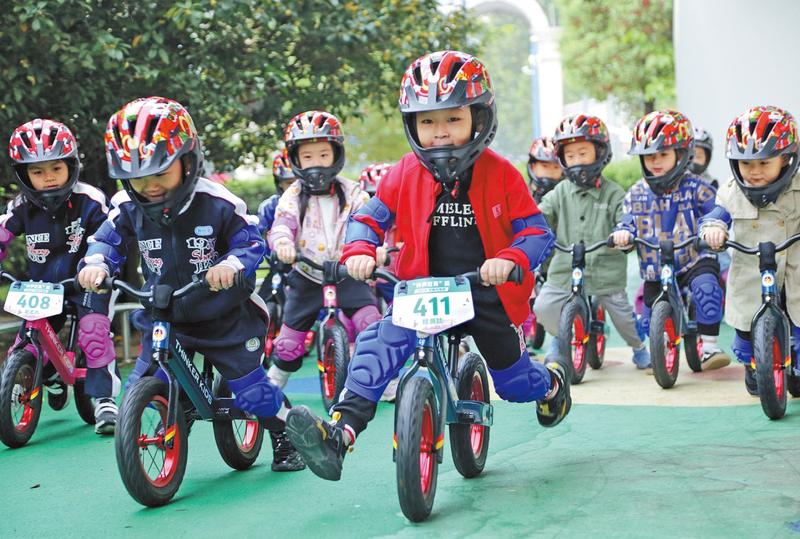 Children at a kindergarten in Lianyungang, Jiangsu province, use balance bikes to exercise in October. (WANG CHUN / FOR CHINA DAILY)

Li Xiaoyu, whose son attends a kindergarten in Beijing, has always paid great attention to her child's fitness because he has been overweight since he was a toddler.

Now, she is even more motivated to get the 5-year-old to do extra physical exercise after education authorities recently decided to gradually raise scores for the PE test in the zhongkao, the high school entrance exam, to equal those for Chinese, mathematics and English.

Only by raising PE scores in important tests can schools, parents and students themselves begin to prioritize PE as much as academic subjects

Wei Shanqing, PE teacher at a middle school in Kunming

She said she dreads taking her son for physical checkups, because the doctors always remind her to keep an eye on his weight.

To help her son slim down, Li conducted a lot of research into jump-rope techniques so she could teach them to him. She considers it the easiest form of exercise for him, but to her dismay he is still unable to master the basic skills, despite multiple attempts.

"He is just not the type of boy who likes exercise, so I am considering signing him up for PE cram courses," Li said.

To tackle the issue of rising rates of obesity and myopia among students, education authorities have resorted to what many see as the most effective approach; raising the importance of sports in crucial exams such as the zhongkao.

In October, Wang Dengfeng, head of the Department of Physical, Health and Arts Education at the Ministry of Education, said China would gradually increase the weighting of PE classes to match academic subjects in the zhongkao and start research on the inclusion of PE scores in the national college entrance exam, or gaokao.

Wang said primary and secondary schools must provide students with one PE class a day and universities are also encouraged to open PE classes, which are not mandatory at present, for postgraduate students. Undergraduates are already required to undertake a certain amount of exercise as part of their studies.

China provides 14 years of compulsory sports education, from the first grade to the second year of college. Despite that, many students do not learn how to play a single sport, according to Wang.

"Many people treat PE as a less important subject and think it does not matter whether students learn it or not, or whether they excel in the subject. We must change this mentality," he said.

Because PE is deemed unimportant, students spend more time studying and less time exercising, which has contributed to a decline in their fitness and caused poor eyesight, he added.

The myopia rate among primary and secondary school students rose by 11.4 percentage points to 70.6 percent in the first half of last year, as children spent more time studying online, the ministry said.

Obesity is also a growing concern.

A 2018 ministry survey of 200,000 fourth and eighth grade students found that obesity rates had risen among those groups.

Yunnan province has taken the lead in tackling the issue. In last year's fall semester, it raised the total PE score from 50 points to 100 for the zhongkao. 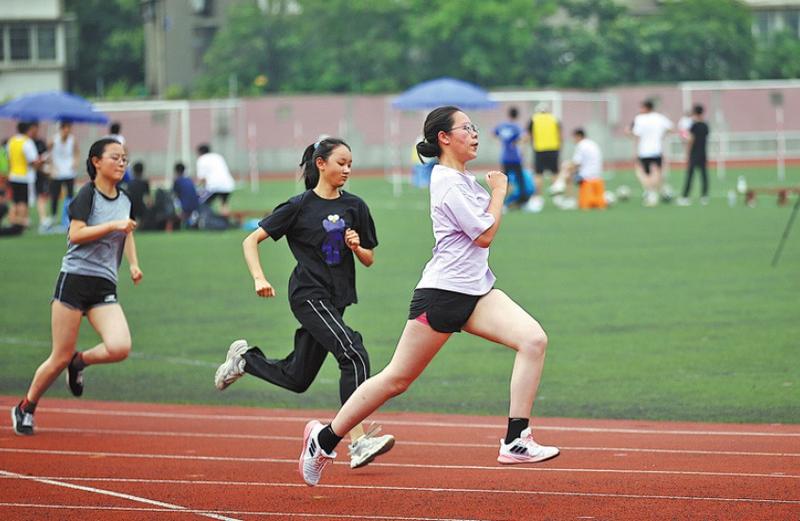 Students' running abilities are tested as one of the subjects in the high school entrance exam in Nantong, Jiangsu province, in June. (XU PEIQIN / FOR CHINA DAILY)

It was the first time any provincial-level region had given PE and the three major subjects－Chinese, mathematics and English－equal importance in the exam.

Guangzhou, Guangdong province, has also decided to increase the weighting given to PE in the zhongkao, and will raise the score from 60 points to 70 from this year.

To cope with the growing importance of PE, parents have resorted to more extracurricular training courses to ensure their children are not left behind by achieving a low score or even failing PE tests.

Zhao Fei, mother of a third grader in Beijing, has been signing her son up for PE cram courses since he was in kindergarten. It began with courses for basic fitness training and now the 9-year-old takes a two-hour judo class twice a week.

Apart from making the boy healthier, Zhao has another goal in mind－passing PE exams, she said.

Her son's primary school tests students in PE at the end of each term, and although the results will not have much influence in determining his future, they will factor in awards of "excellent student" titles.

Meanwhile, as Zhao's son grows, high PE test scores will be a bonus to help him attend good high schools and universities, she said.

A fitness training club in Beijing told China National Radio that it has opened special courses to help middle school students obtain high scores in PE tests in the zhongkao, with each class costing more than 200 yuan (US$31).

A PE training institution in Guangzhou told CNR that one of their most popular courses teaches pupils jump-rope skills, with 30 classes costing 9,600 yuan.

Many students choose jump-rope because it is easier to master than running or the long jump, according to one coach who was interviewed.

China's traditional idea of talent cultivation places more emphasis on mental education than physical, so schools are squeezing PE classes to save time for the major subjects. Some are even ignoring the compulsory hour of exercise required by the ministry. 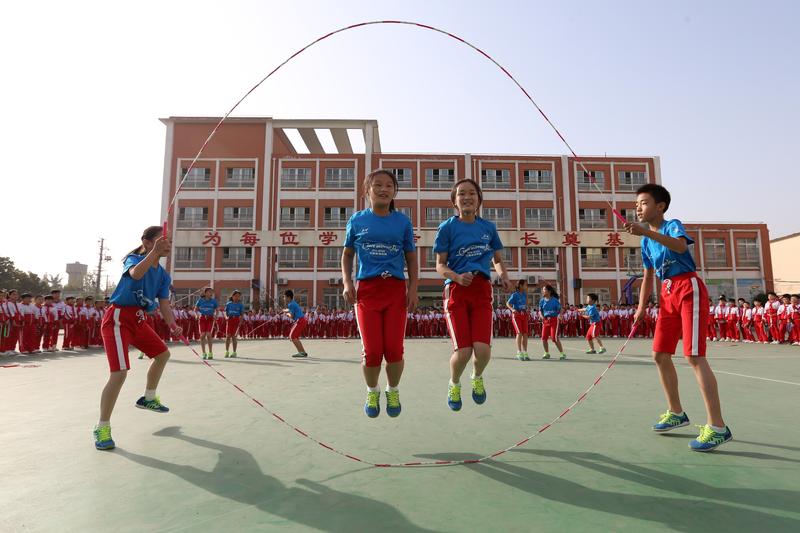 Physical education has long been a marginalized subject in China, where intense academic competition has resulted in some teachers "borrowing" PE classes so their students can continue their regular academic studies, Wei said.

"Only by raising PE scores in important tests can schools, parents and students themselves begin to prioritize PE as much as academic subjects and thus lower the rates of obesity and myopia among students," he added.

Xie Guoqiang, father of a fifth grader in Yunnan's Nujiang Lisu autonomous prefecture, said he agreed with raising PE scores in the zhongkao because a healthy body is a prerequisite for everything else.

The policeman and former soldier said he has long paid great attention to his son's physical education, and he often does various sports with the 11-year-old.

"Exercise can reduce the pressure of academic work and make studying more efficient," he said.

"Rather than having him glued to a smartphone or eating junk food all day, I would much rather my son went outside and had fun exercising."

However, Ming Yang, mother of a fifth grader in Kunming, said she was concerned that the decision to raise the weighting of PE in the zhongkao was made without sufficient research and public opinion.

Yunnan is not a wealthy province, so such educational reforms should be undertaken in more-developed regions first because they have the necessary resources, she said.

"I am all for happy study and exercise every day, but the fact is that to get into good high schools in the city many middle school students study from early in the morning until midnight. There is simply no time for them to improve their PE scores," she added.

"All parents want their child to run happily in the sun and have a healthy body. However, as no parents are willing to make their children less competitive academically, raising the PE scores means they will now need to squeeze their sleep time for PE, which will be detrimental to their health."