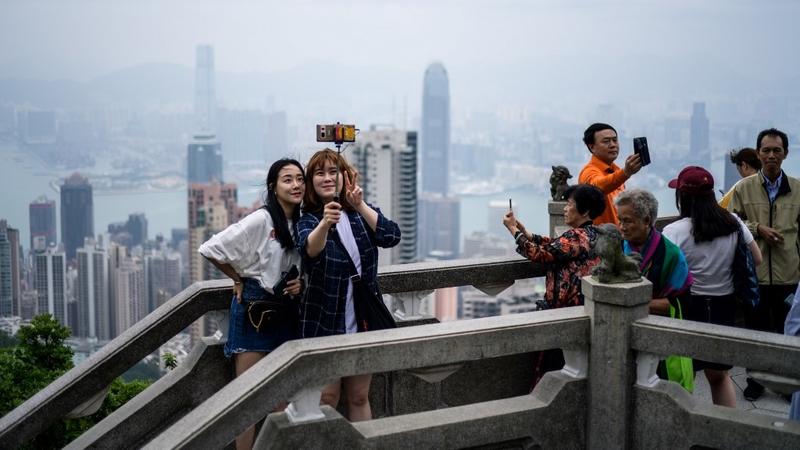 In this May 3, 2019 picture, tourists take selfies from Victoria Peak in front of a view of residential and commercial buildings in Kowloon, background, and Hong Kong island, foreground, separated by the Victoria Harbour. (ANTHONY WALLACE / AFP)

HONG KONG - The Hong Kong Special Administrative Region government has welcomed the joint promulgation of the Culture and Tourism Development Plan for the Guangdong-Hong Kong-Macao Greater Bay Area by the Ministry of Culture and Tourism, the Office of the Leading Group for the Development of the Guangdong-Hong Kong-Macao Greater Bay Area and the People’s Government of Guangdong Province.

The plan sets out the directions for the overall cultural and tourism development of the Guangdong-Hong Kong-Macao Greater Bay Area and guides the development of the Bay Area into an exchange hub for culture of the East and the West and a world-class tourism destination, said a spokesman for the HKSAR government in a statement issued on Monday evening.

The HKSAR government will work hand in hand with the relevant mainland authorities to jointly implement the major work in the plan to develop a world-class Bay Area for culture and leisure, said a spokesman for the HKSAR government

“Based on the guiding directions of the plan, the HKSAR government will proactively integrate into the country’s overall development,” according to the statement.

The government will also work hand in hand with the relevant mainland authorities to jointly implement the major work in the plan to develop a world-class Bay Area for culture and leisure, according to the statement.

This will also create opportunities for arts and culture organizations in the Bay Area to explore the international market together.

The broader performing arts market in the Bay Area will also enhance the quality of productions of the arts and culture sector in Hong Kong. In the long run, this will help achieve the goal of building the Bay Area into a quality living circle for living, working and travelling, as mentioned in the plan.

The plan projected that by the year 2035, the area's tourism and cultural sectors will realize high-quality development, and it will boast greater cultural soft power and higher tourism competitiveness

On tourism, the HKSAR government fully supports the various measures taking forward the Bay Area's tourism development in the “Building a Bay Area for Leisure” chapter of the plan.

They include developing more distinctive Bay Area tourism products and itineraries, jointly promoting Bay Area multi-destination tourism, driving the tourism development of cruises and yachting, strengthening the cooperation of tourism market regulation of the bay area as well as the nurturing of tourism talents.

Implementation of these measures will attract more overseas tourists to the Bay Area and promote the high-quality development of its tourism industry as well as construct a world-class Bay Area for traveling.

The spokesman said both the plan and the Outline Development Plan for the Guangdong-Hong Kong-Macao Greater Bay Area promulgated in February 2019 expressly support Hong Kong in developing into an international tourism hub and a core demonstration zone for multi-destination tourism.

When the COVID-19 pandemic is over, the HKSAR government will continue to leverage Hong Kong’s strengths as Asia’s world city and best utilize its well-established marine, land and air connections as well as rich tourism resources to attract overseas tourists to embark on Bay Area multi-destination journeys through Hong Kong.

The Hong Kong Tourism Board will jointly promote the Bay Area tourism brand and feature Hong Kong as a star destination for multi-destination tourism with Guangdong and Macao in due course, the spokesman added.

According to the Ministry of Culture and Tourism, the nation will build the Bay Area into a habitable, entrepreneur-friendly area and a tourist destination with a flourishing cultural industry.

The plan projected that by the year 2035, the area's tourism and cultural sectors will realize high-quality development, and it will boast greater cultural soft power and higher tourism competitiveness.

The plan also emphasized the promotion of national history and culture and the need to beef up patriotic education among the youth in the area.