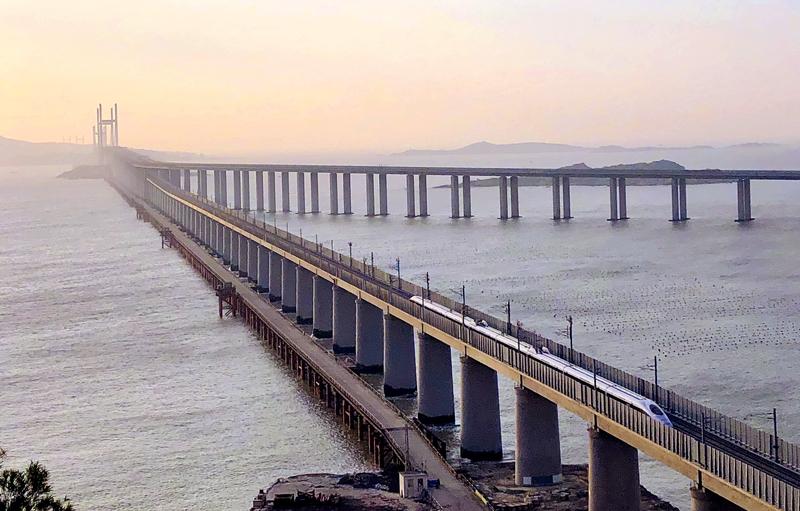 A train travels on the Pingtan Haixia Rail-Road Bridge of the Fuzhou-Pingtan Railway on Dec 26, 2020. (HU GUOLIN / FOR CHINA DAILY)

A railway connecting the mainland with Pingtan, an island county in Fujian province, opened on Saturday, linking it to the national railway network.

Pingtan is the largest island in Fujian province, and is also the closest place on the Chinese mainland to the main island of Taiwan

Pingtan, 126 kilometers from Hsinchu, Taiwan, is the largest island in Fujian province, and is also the closest place on the Chinese mainland to the main island of Taiwan.

The 88-km line with six stations connects the island with Fuzhou, capital of Fujian. Trains using it can run at 200 km per hour and make the trip in 35 minutes.

China's first cross-sea road and rail bridge was a key project during construction of the railway, said China Railway Corp, the national railway operator. Eleven kilometers of the 16.3-km bridge is a cross-sea section. The upper level of the bridge is a two-way six-lane freeway with a designed speed of 100 km/h that opened for trial operation on Oct 1. The lower level, a two-line railway with a designed speed of 200 km/h, opened on Saturday.

The company said the bridge is located in an area prone to strong gales and waves.

With complicated geographic conditions and limited working time, designers and construction workers faced severe technological challenges and construction risks. Construction could only be carried out on fewer than 120 days when gales were comparatively milder.

It was a more difficult project than China's other cross-sea bridges, including the Hong Kong-Zhuhai-Macao Bridge, it said.

The railway links Pingtan with other railway lines at Fuzhou, including the Hefei-Fuzhou and Hangzhou-Shenzhen high-speed railways, improving the rail network in the northeast of Fujian.

Yang Shantai, a resident of Dalian Island in the Pingtan Straits, said gales and waves prevented him from leaving the island for about one-third of the year.

A ferry was the only mode of transport connecting the island to the mainland, but it stopped when gales had wind speeds of more than 62 km/h.

"With the opening of the railway, it is more convenient for us islanders to travel," he said.