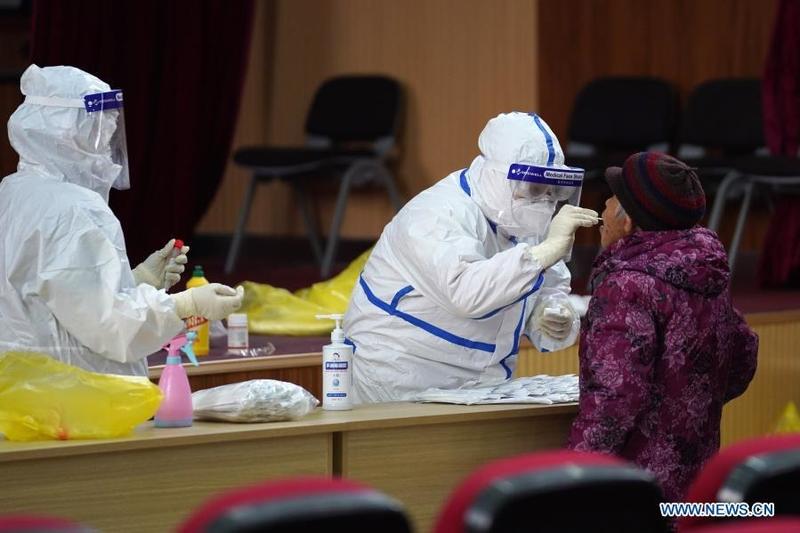 Eight of the local cases were reported in northeast China's Liaoning province while the other seven were posted in Beijing, the commission said in its daily report.

Of the new imported cases, four were reported in Shanghai, three in Sichuan, and one each in Tianjin, Inner Mongolia, Fujian, Henan and Guangdong, the National Health Commission said

Of the new imported cases, four were reported in Shanghai, three in Sichuan, and one each in Tianjin, Inner Mongolia, Fujian, Henan and Guangdong, the commission said.

There were no new reports of suspected cases and deaths related to the disease, said the commission, adding that another 18 patients were discharged from hospitals after recovery.

The total number of confirmed COVID-19 cases on the mainland reached 87,003 by Monday, including 348 patients still receiving treatment.

So far, a total of 82,021 patients had been discharged from hospitals following recovery, and 4,634 had died as a result of the virus, according to the commission.

There were no suspected cases on the mainland as of Monday, and 11,909 close contacts remained under medical observation.

A total of 262 asymptomatic cases were under medical observation, of whom 215 arrived from outside the mainland.

By the end of Monday, 8,671 confirmed cases, including 141 deaths, had been reported in the Hong Kong Special Administrative Region (SAR), 46 cases in the Macao SAR, and 793 cases, including seven deaths, in Taiwan.

A total of 7,526 COVID-19 patients in the Hong Kong SAR had been discharged from hospitals following recovery, 46 in the Macao SAR, and 654 in Taiwan.

Kaiyuan city in northeast China's Liaoning province has detected the coronavirus on a packaging sample collected from a shipment of frozen pork imported from Mexico, local authorities said on Tuesday.

The contaminated sample was detected during the city's inspection on imported cold-chain foods.

The local authorities have launched an emergency response, sealing the frozen goods, disinfecting the cold storage, and tracing people who had been in contact with the contaminated packaging as well as their close contacts. All relevant individuals have been placed under quarantine and are undergoing nucleic acid tests.

The city has also notified people who had access to the batch of goods in other places.

Wuhan has started the emergency use of COVID-19 vaccine candidates on certain key groups of people, the municipal government said Monday.

The vaccination, available at 48 designated clinics in 15 districts, began on Dec 24, targeting some key groups of people aged between 18 and 59, said He Zhenyu, deputy director of the center for disease control and prevention in Wuhan, capital of Hubei province.

Those receiving the vaccine need to take two shots with an interval of four weeks, said He at a press briefing.

From Oct 1 to Dec 27, Wuhan has reported a total of 43 imported case - 10 confirmed cases and 33 asymptomatic ones. All but four asymptomatic carriers have been discharged from hospitals, said Peng Houpeng, deputy director of the municipal health commission.