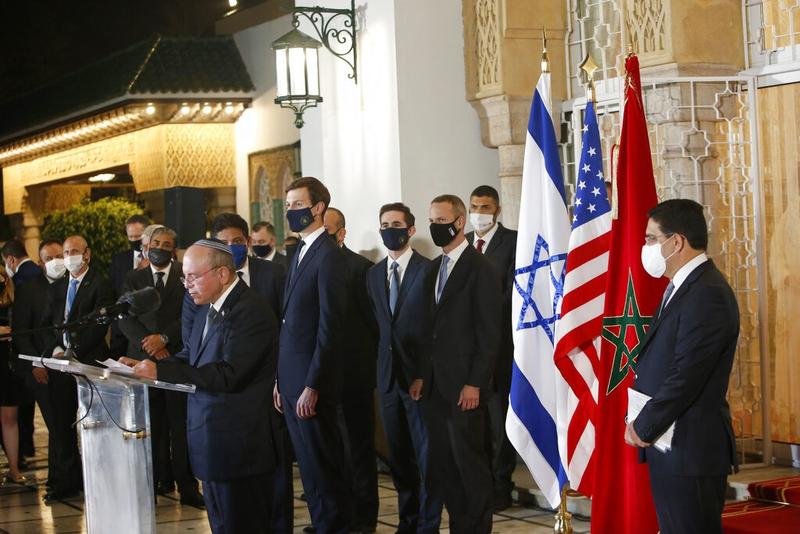 RABAT - Israeli envoys arrived in Morocco on Tuesday to meet the king and flesh out an upgrade of relations that was forged by the White House in a parting foreign policy push by US President Donald Trump.

They took El Al Israel Airlines in the first direct flight by a commercial plane from Tel Aviv to Rabat. Both countries anticipate a surge in tourism aboard such connections, mainly among the hundreds of thousands of Israelis of Moroccan descent.

Morocco followed the United Arab Emirates, Bahrain and Sudan in moving toward normal relations with Israel

Morocco followed the United Arab Emirates, Bahrain and Sudan in moving toward normal relations with Israel. Palestinians have censured the US-brokered deals, seeing a betrayal of a long-standing demand that Israel first meet their statehood demand.

As the Trump administration has sought to isolate Israel’s arch-enemy Iran, the deals have been sweetened with promises of business opportunities or economic aid.

Israel’s new partners have also enjoyed bilateral benefits from Washington - in Rabat’s case, US recognition of its sovereignty over the Western Sahara.

The US-brokered deal is a “major development in favour of regional peace and stability”, Morocco’s Royal Palace said in a statement following talks between King Mohammed VI, Ben-Shabbat and Kushner.The Palace also reiterated its position in support of a two-state solution to the Israeli-Palestinian conflict and highlighted its “close ties” with Morocco’s Jewish community.

“There are no limits for cooperation...in aviation, innovation, health and agriculture. As friends and partners we will make a change in the region,” said Ben-Shabbat, speaking in Moroccan Arabic. He invited King Mohammed to visit Israel, according to the Israeli Prime Minister’s office.

A related agreement was signed under which the US International Development Finance Corporation will offer US$3 billion to support private investments in Morocco and in sub-Saharan Africa in partnership with Moroccan businesses.

Moroccan officials describe their deal with Israel as a restoration of mid-level ties that Rabat cooled in 2000 in solidarity with Palestinians, who seek statehood in territory captured by Israel in the 1967 Middle East war.

Israel and Morocco now plan to reopen mutual liaison offices within two weeks and to launch direct commercial flights, Moroccan Foreign Minister Nasser Bourita told reporters. The resumption of ties with Israel was welcomed by the major Moroccan political parties, but rejected by far left and Islamist groups.Israel hopes ties will eventually be upgraded to embassy level. However, asked if the countries might establish full diplomatic relations before Trump steps down next month, Israeli Intelligence Minister Eli Cohen told Ynet TV: “My understanding is that the likelihood is not high.”