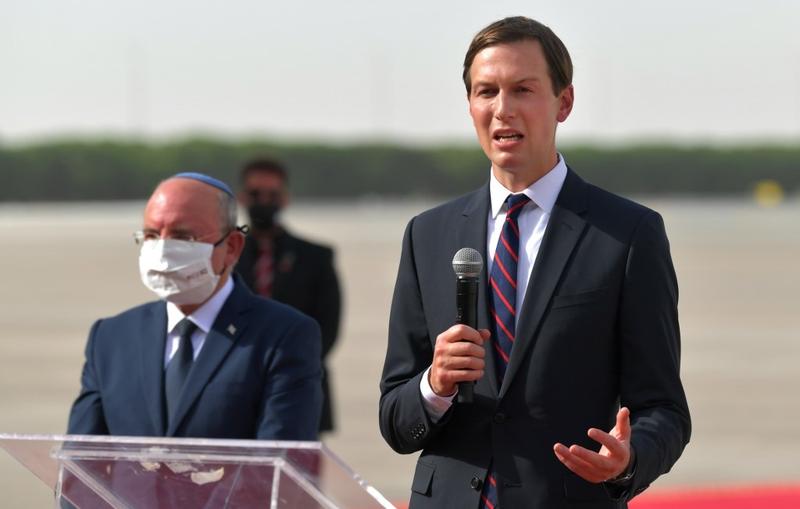 In this Aug 31, 2020 photo, US Presidential Adviser Jared Kushner speaks next to Head of Israel's National Security Council Meir Ben-Shabbat at the tarmac of Abu Dhabi airport following the arrival of the first-ever commercial flight from Israel to the UAE. (KARIM SAHIB / AFP)

JERUSALEM - Israel sent envoys to Morocco on Tuesday to meet its king and hammer out an upgrade of ties that was forged by the White House in a parting foreign-policy push by US President Donald Trump.

Palestinians have been critical of US-brokered normalization deals between Israel and the United Arab Emirates, Bahrain, Sudan and Morocco

Led by National Security Adviser Meir Ben-Shabbat, the delegates were accompanied to Rabat by Jared Kushner, Trump’s son-in-law and architect of pan-Arab rapprochements with Israel.

They took El Al Israel Airlines in the first direct flight by a commercial plane from Tel Aviv to Rabat, opening the way for a possible surge in tourism among the hundreds of thousands of Israelis of Moroccan descent.

Palestinians have been critical of US-brokered normalization deals between Israel and the United Arab Emirates, Bahrain, Sudan and Morocco, saying the Arab countries have set back the cause of peace by abandoning a longstanding demand Israel give up land for a Palestinian state before receiving recognition.

As the Trump administration has sought to isolate Iran, the normalisation deals have been sweetened with promises of business opportunity or economic aid. Israel’s new partners have also seen bilateral benefits from Washington - in Rabat’s case, US recognition of its sovereignty over the Western Sahara.

The jet was painted with the Hebrew, Arabic and English words for “peace” and a palm-shaped Maghreb good-luck talisman.

Some US officials have privately voiced hope of hosting an Israel-Morocco signing ceremony at the White House before Trump steps down on Jan 20.

Facing domestic dissenters at the engagement with Israel, Moroccan ministers have cast it as a formalisation of de facto relations under which Rabat had hosted an Israeli “liaison office”. Shut in 2000 in solidarity with the Palestinians, that office will now reopen. Israel hopes for mutual embassies, eventually.

“This type of agreement will help have a better interaction between communities and people,” Moroccan Tourism Minister Nadia Fettah Alaoui told Israeli television channel I24.