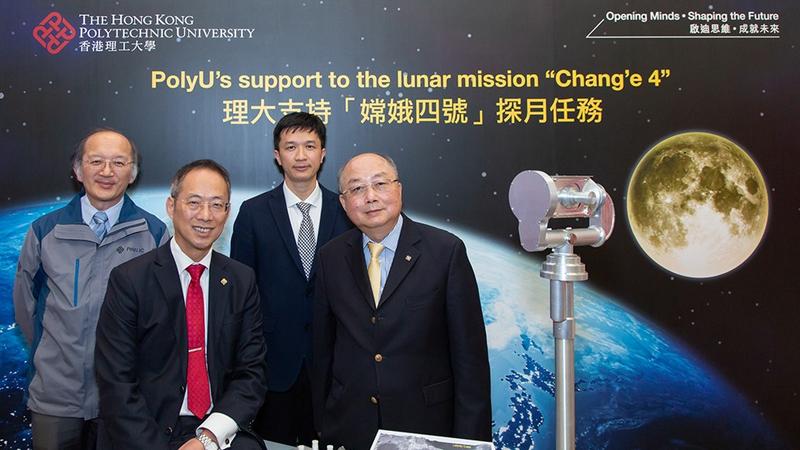 The Camera Pointing System that Yung Kai-leung’s team designed for the Chang’e-4 lander was the first instrument designed and built in Hong Kong to be deployed for the nation’s lunar exploration program. (PHOTO PROVIDED TO CHINA DAILY)

The team, led by Professor Yung Kai-leung, associate head of PolyU’s Department of Industrial and Systems Engineering, developed and manufactured the automatic Surface Sampling and Packing System in collaboration with the China Academy of Space Technology. The system collects, packs, and seals samples from the lunar surface.

“If these procedures hadn’t worked, the whole mission would have been out the window,” Yung told the media in Hong Kong within hours after the returning Chang’e-5  landed in Inner Mongolia autonomous region. He added that he was “nervous” when he took the job in 2011.

The system has more than 400 components constructed with different materials, including titanium alloy, aluminum alloy and stainless steel. Numerous experiments and examinations of the system were conducted before installing it on Chang’e-5, as the mechanism needs to withstand extreme conditions in outer space, including temperatures as high as 200 C during travel to and operation on the moon, Yung said.

He also recalled that the program had to “keep a low profile”, especially during last year’s social unrest, to keep its laboratory from being vandalized. The university weathered extensive damage from anti-government protests in November 2019 when radicals laid siege to its campus.

During the 23-day Chang’e-5 lunar mission, which began on Nov 24, Yung and the team did not join their mainland colleagues at the nation’s control centers because of the COVID-19 pandemic, but instead observed each sampling step through real-time data from the laboratory in Hong Kong.

Yung hopes that the PolyU or local scientific community will obtain some samples for further study, as PolyU’s sophisticated fundamental research on the lunar environment was a key factor in the high reliability of his team, earning them a ticket to the national project.

The research team will continue to refine the technology to make it “more perfect” for the Chang’e-6 mission, Yung said. Chang’e-6’s exploration is tentatively scheduled for 2023, according to Xinhua News Agency. The team will also contend for other national space missions, such as Chang’e-7 and asteroid exploration.

The Chang’e-5 expedition was the first in 44 years to bring lunar samples back to Earth. It made China the third country to achieve this feat after the United States and the Soviet Union.