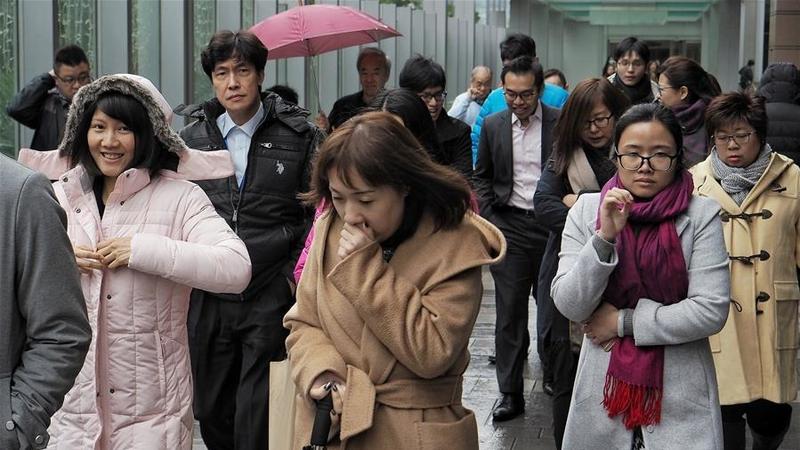 With a strong winter monsoon affecting southern China this week, temperatures dropped to as low as 11.9 degrees Celsius in urban areas on Thursday morning, and to 9.8 degrees Celsius in the New Territories, according to the Hong Kong Observatory.

With a strong winter monsoon affecting southern China this week, temperatures dropped to as low as 11.9 degrees Celsius in urban areas on Thursday, and to 9.8 degrees Celsius in the New Territories, according to the Hong Kong Observatory

People are advised to avoid prolonged exposure to wintry winds to avoid getting cold and having adverse health effects, the Observatory said.

The Home Affairs Department also announced on Wednesday night that the city’s temporary shelters in each of the 18 districts were open on Thursday.

The Labour Department also notified employers to remind their employees who have to work outdoors or in remote areas to wear appropriately warm clothing, and to make arrangements for them to rotate from outdoors to indoors or sheltered work sites.

According to the Observatory, Hong Kong will continue having chilly weather until temperatures gradually climb up next Tuesday, with a second winter monsoon expected to arrive in southern China on Saturday.

The Centre for Health Protection (CHP) said in a separate statement that cold weather can easily trigger or exacerbate diseases, especially among the elderly and people suffering from heart disease, respiratory illness or other chronic illnesses.

Winter has always been a season of infectious disease outbreaks in Hong Kong even before the COVID-19 pandemic.

According to CHP data, a total of 601 adults were in "serious condition" in 2019 due to flu-related illnesses and 356 of them died. There were also 24 such cases among children with one death reported.