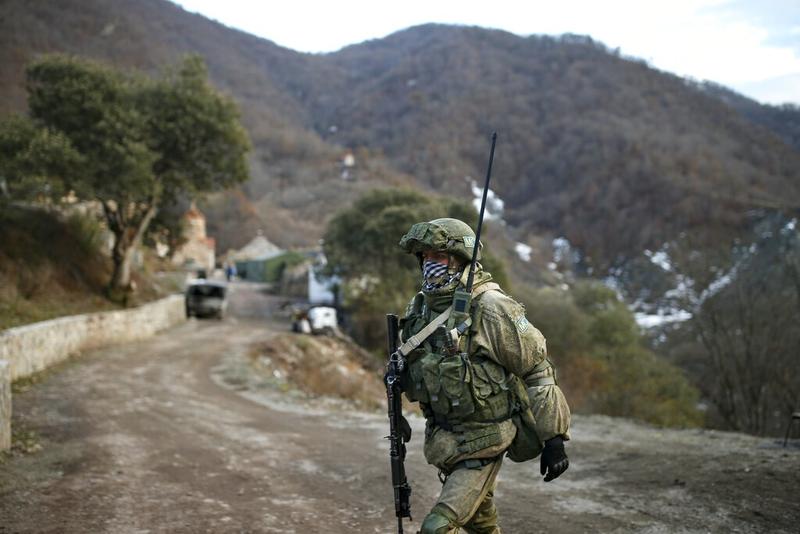 A Russian peacekeeper guards a road leading to the Dadivank, an Armenian Apostolic Church monastery dating to the 9th century, following the transfer of the Kalbajar region to Azerbaijan's control as part of a ceasefire deal, near Kalbajar, Azerbaijan, Dec 2, 2020. (EMRAH GUREL / AP)

In a joint statement published by the ministry, Lavrov, Biegun and Le Drian, representing the Organization for Security and Co-operation in Europe (OSCE) Minsk Group Co-Chair countries, called for a complete and prompt departure of all foreign mercenaries from the region and called upon all parties to facilitate the departure.

The appeal was made amid a ceasefire in Nagorno-Karabakh, where a conflict between the two regions have resulted in more than 5,000 servicemen killed

"The Co-Chair countries remind Armenia and Azerbaijan of their obligation to comply with the requirements of international humanitarian law, in particular with regard to the exchange of prisoners of war and the repatriation of remains," reads the statement

They also reiterated their firm commitment to the non-use or threat of force to settle disputes, according to the statement.

A ceasefire deal was signed by Azerbaijani President Ilham Aliyev, Armenian Prime Minister Nikol Pashinyan and Russian President Vladimir Putin on Nov 9, in which the three sides agreed on a complete ceasefire in the Nagorno-Karabakh conflict zone starting from Nov 10.

According to the Russian Defense Ministry, the ceasefire is currently being observed by all sides.

Also on Thursday, Azerbaijan announced it had lost a total of 2,783 servicemen in the latest round of its armed conflict with Armenia in the region.

More than 100 Azerbaijani servicemen had gone missing, the authorities said, adding that 1,245 servicemen were being treated in medical facilities.

More than 600 bodies of servicemen were found during search operations in the Nagorno-Karabakh region, according to Armenia's media outlet Armenpress on Wednesday.